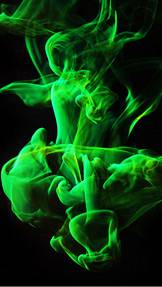 The Art of Science exhibition at the Friend Center at Princeton University explores the interplay between science and art. Above, "Merger and acquisition" by graduate students Daniel Quinn, Brian Rosenberg and Amanda DeGiorgi, and professor Alexander Smits, all of the Department of Mechanical and Aerospace Engineering, shows how the intermingling of two fluids can be remarkably intricate by imaging a drop of fluorescent dye plunging into still water.

Images courtesy of the Office of Engineering Communications

The Art of Science 2013 exhibit in the Friend Center on the Princeton University campus consists of 43 images of artistic merit created during the course of scientific research. The works, part of a recurring show now in its sixth iteration, were chosen from 170 images submitted from 24 departments across the University. This video offers a cross-section of the artwork on display.

The exhibit is free and open to the public from 9 a.m. to 6 p.m., Monday through Friday. The images can also be viewed in an online gallery.

Adam Finkelstein, professor of computer science and one of the exhibit organizers, said that Art of Science spurs debate among artists about the nature of art while opening scientists to new ways of "seeing" their own research. "At the same time," Finkelstein said, "this striking imagery serves as a democratic window through which non-experts can appreciate the thrill of scientific discovery."

The top three entrants, chosen by a panel of judges made up of faculty and staff in the arts and sciences, received cash prizes. The first-prize image was "East-West, West-East" by Martin Jucker, a postdoctoral research fellow in the Program in Atmospheric and Oceanic Sciences. Second prize went to "Crushed birch," by Michael Kosk, an undergraduate in the Class of 2016. Third prize went to "Web of art and science" by Paul Csogi, webmaster at the Lewis Center for the Arts, and Christopher Cane, webmaster at the Princeton Plasma Physics Laboratory.

Three People's Choice award winners also were selected, based on 139 paper ballots filled out by those attending the Art of Science 2013 opening reception in May.

Art of Science 2013 is sponsored by the David A. Gardner '69 Fund in the Council of the Humanities, the Princeton Plasma Physics Laboratory, the School of Engineering and Applied Science, and numerous co-sponsors across campus. 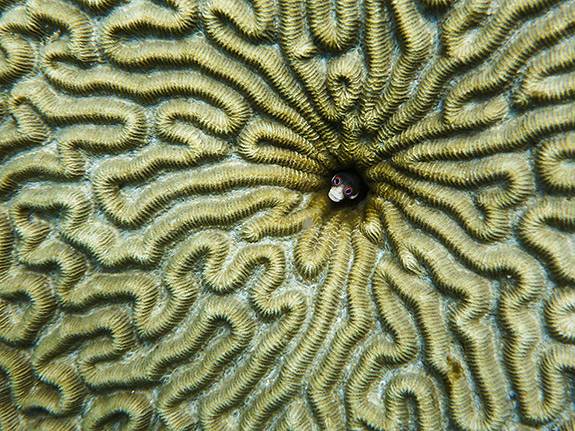 Rising senior Chhaya Werner, who is majoring in ecology and evolutionary biology, submitted the photo above, "Maze dweller." She wrote, "That sweet little face peering out of a coral labyrinth is that of a a goby fish. ... I took this photo in the course of field research for the coral reefs lab course in Panama (EEB 346) for a project on the ecology of coral reefs, focusing on interactions between corals, algae and sea urchins."