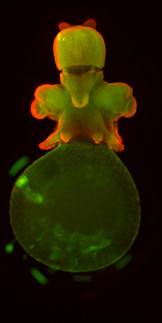 The "Art of Science 2014" exhibit at the Friend Center at Princeton University explores the interplay between science and art. Above, "baby kraken," by Associate Professor of Chemical and Biological Engineering Celeste Nelson, is an image of a pea-sized squid embryo taken using a fluorescence microscope.

The "Art of Science 2014" exhibit in the Friend Center on the Princeton University campus showcases 44 images of artistic merit created during the course of scientific research. More than 250 images were submitted by undergraduates, graduate students, faculty, postdocs, staff and alumni representing over 25 departments. This year, for the first time in its seven-year history, the competition also includes video. Twelve videos were chosen from more than 50 submissions.

"So much of science and engineering involves video or animation these days that it was inevitable we would include it in 'Art of Science,'" said Dan Quinn, a graduate student in mechanical and aerospace engineering who is one of this year's exhibit organizers.

Images in the exhibit span research topics including fruit fly gestation, tropical fungi, silicon crystals in computer chips, Tanzanian wildebeest and crystallized Vitamin C. The video below offers a cross-section of the artwork on display.

The physical exhibit is free and open to the public from 9 a.m. to 6 p.m., Monday to Friday through April 2015, in the Friend Center.

See some of the artwork featured in Princeton University's "Art of Science 2014" exhibit. (Video by Maggie Westergaard, Office of Communications)