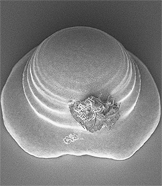 "Easter Bonnet," the third-place entry in the "Art of Science" exhibition, is a photograph by Qiangfei Xia, a graduate student in electrical engineering. Taken with an electron scanning microscope, it shows a tiny piece of metal melted by a laser onto a silicon chip. An unintended dust particle serves as a decorative flower on its top. The size of the bonnet in this photo is about 45 micrometers, half the diameter of a human hair.

At left: The first-place winner is a painting titled "Mitosis" by Jennifer Rea, a senior majoring in the history of science. The painting depicts cell division superimposed on a floral fabric.

The University's second annual "Art of Science" exhibition, highlighted by three winning student entries, is now on display in the hallway of the Friend Center's main floor.

The juried show features prints, videos, poetry, paintings and sculptures -- 55 works in all -- produced in the course of scientific or technical research by faculty, staff and students in more than a dozen different departments.

The exhibited works -- which include six videos, one sculpture, one poem, three canvases and 44 digital prints -- were selected from more than 150 submissions. The top prize winners are:

Cash prizes were given to the winners: $250 for first place; $154.51 for second; and $95.49 for third. The organizers derived these amounts according to the golden ratio, a mathematical proportion that has been found in aesthetically pleasing designs, from seashells to ancient Greek temples.

The judges also decided to award a special video category prize in the amount of $196.54 (the geometric mean of the first- and second-place prizes) to molecular biologist Jean-Baptiste Boule and biophysicists Matthieu Coppey and Thomas Gregor for their work, "Drosophilia." The movie shows the early stages of embryonic development of a fruit fly egg.

The jurors were President Shirley M. Tilghman; photographer Emmet Gowin, a professor of the Council of the Humanities and visual arts; and Dean of the Faculty David Dobkin, a professor of computer science whose research focuses on computer graphics.

The judging "was an almost impossible task," said Dobkin. "There were so many good entries that it was hard to choose just a few from the group as the best. I'm sure the other judges felt the same way."

The exhibition, which began May 10, is open from 9 a.m. to 6 p.m. weekdays and is expected to remain on display for a year. A virtual gallery, which includes captions describing the work of the researchers who created the images, is available online at http://www.princeton.edu/artofscience/. 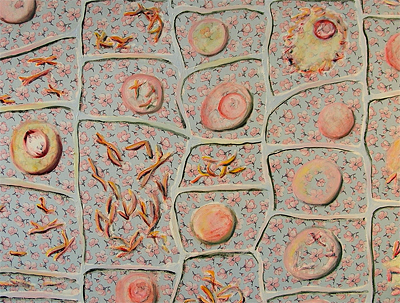 "The captions include a story behind each image that reveals something of the personality of the scientist who created it," said Andrew Moore, a photographer and filmmaker who is a lecturer in the Program in Visual Arts and one of the exhibition's organizers.

"These are not just byproducts of research by anonymous people in white coats. They are the results of creative individuals working over a long period of time, often not knowing where their research is going to lead," Moore said.

One of the most unusual pieces in the exhibit -- a solicited work that was not entered into the competition -- is a 3-ton "sculpture" that was found in a scrap heap at the Princeton Plasma Physics Laboratory, a U.S. national laboratory dedicated to science and innovation in fusion energy.

The sculpture is a prototype of an electromagnetic coil used in an experimental fusion device. Exhibition organizers noted that the shape of the coil is a kind of mirror image to a sculpture by the famous artist Henry Moore near West College on the Princeton campus.

"When I saw it at the scrap yard over at PPPL it seemed to serendipitously reflect upon the University's Henry Moore sculpture, 'Oval with Points,' so I thought it would be perfect for the Art of Science show," said Andrew Moore. "It fits with the whole theme of the exhibit -- that science has this incredible aesthetic component to it."

The call for entries for this year's exhibition was limited to the Princeton community. However, the organizers said they plan to make next year's competition a worldwide one.

The "Art of Science" exhibition is sponsored by the Office of the President, Office of the Dean of the Faculty, School of Engineering and Applied Science, Lewis-Sigler Institute for Integrative Genomics, Department of Computer Science and Council of the Humanities.