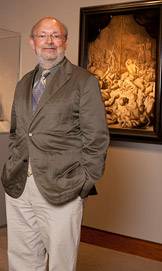 Long interested in the relationship between words and images, Leonard Barkan, the Class of 1943 University Professor of Comparative Literature at Princeton, has written a book that examines the sketches and doodles Michelangelo made on drawings in his studio. The study provides insights into the private creations of the Renaissance artist.

Several years ago, during research for a book on the Renaissance, Princeton professor Leonard Barkan examined a handful of drawings by Michelangelo. They were not finished works, but sketches and doodles done on sheets of paper in Michelangelo's studio over his 75-year career. Barkan noticed that many of the drawings had writing on them.

"And I noticed that nobody else was noticing that," said Barkan, the Class of 1943 University Professor of Comparative Literature, who describes his findings in the accompanying video. "There was almost a conspiracy, when talking about the drawings, to ignore the writing. Even in an enormous account of a drawing, the fact that there were 24 lines of writing on it would scarcely be mentioned. And in a study of his poems, you wouldn't know that the same sheet of paper had a drawing."

Comparative literature professor Leonard Barkan talks about the words and sketches on Michelangelo's drawings in this video.

So Barkan wrote "Michelangelo: A Life on Paper," the first book to explore the interplay of words and images on more than 200 of the artist's drawings. Barkan's study provides fascinating insights into Michelangelo's life and work through the juxtaposition of pictures and words, examining writing that ranges from poems to grocery lists. The New York Times called the book, published by Princeton University Press in 2010, "a historical study as absorbing as a novel."

The works are a treasure trove for studying Michelangelo because the vast majority of them were private, impulsive creations, according to Barkan. "They are things he produced for his eyes only, or for the eyes of a very few people," he said. "They are doodles — verbal and visual doodles — and accidents of inspiration. They give us a sense of what was on his mind."

Barkan's research led to discoveries of how Michelangelo reused sheets of paper. For example, a page with a sketch of a male nude, likely done in 1504, was 24 years later folded and the reverse side used by the artist to jot down notes, including a list of items he had recently purchased. (Image courtesy of Leonard Barkan)

Barkan chairs the University's comparative literature department — which examines literature across languages and cultures — and he has long been interested in the relationship between words and images, focusing on the Renaissance. He joined the Princeton faculty in 2001, and last year was awarded the University's Howard T. Behrman Award for Distinguished Achievement in the Humanities. 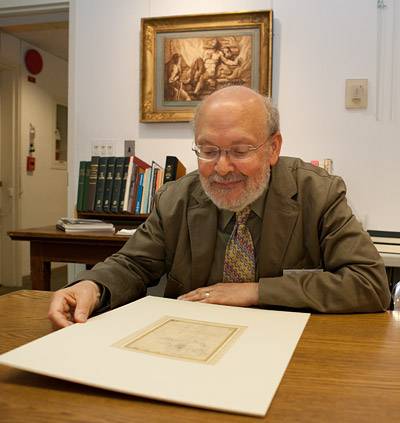 Barkan began his studies of Michelangelo in 1991. He traveled to Italy, England and France to examine original art, giving him a sense of the artist's personality. "The book ended up being a psychobiography," Barkan said. (Photo by Brian Wilson)

Barkan began his studies of Michelangelo in 1991. On one sheet of Michelangelo's that Barkan studied, there is a pen-and-ink drawing of a nude male, likely done in 1504. Sometime later the sheet was folded in quarters, and on the reverse side Michelangelo jotted down the prices of spoons and shirt cuffs he purchased, as well as a list of payments made for a nephew in 1528.

Why would the artist reuse this sheet of paper 24 years later, and combine artistic work with mundane tabulations? One reason is that "Michelangelo and his contemporaries don't yet have a sense that everything a great artist puts on paper is going to be collectible," Barkan said. And while paper at this time was not immensely expensive, it wasn't immediately available and cheap either.

Figuring out Michelangelo's motivations "is the most complicated question of the book," Barkan said. In this case, as in most of the examples about which Barkan writes, the art and writing that share a page have little to do with each other, he said.

Barkan examined hundreds of sheets of paper used by Michelangelo, traveling to Italy, England and France to look at the originals. The study gave him insight into many aspects of Michelangelo's personality — at times introspective and melancholy, at other moments light-hearted and irreverent, he said.

"The book ended up being akin to psychobiography, because I came to feel that this was his inner life expressing itself," Barkan said.