As the Earth's climate changes, the worst inundations from hurricanes and tropical storms could become far more common in low-lying coastal areas, a new study suggests. Researchers from Princeton University and the Massachusetts Institute of Technology found that regions such as the New York City metropolitan area that currently experience a disastrous flood every century could instead become submerged every one or two decades.

The researchers report in the journal Nature Climate Change that projected increases in sea level and storm intensity brought on by climate change would make devastating storm surges — the deadly and destructive mass of water pushed inland by large storms — more frequent. Using various global climate models, the team developed a simulation tool that can predict the severity of future flooding an area can expect.

The researchers used New York City as a test case and found that with fiercer storms and a 3-foot rise in sea level due to climate change, "100-year floods" — a depth of roughly 5.7 feet above tide level that occurs roughly once a century — could more likely occur every three to 20 years. What today are New York City's "500-year floods" — or waters that reach more than 9 feet deep — could, with climate change, occur every 25 to 240 years, the researchers wrote.

The research is not only the first to examine the future intensity of storm surges, but also to offer a tool for estimating an area's vulnerability, said co-author Michael Oppenheimer, the Albert G. Milbank Professor of Geosciences and International Affairs at Princeton.

"Coastal managers in cities like New York make daily decisions about costly infrastructure that would be affected by such storms. They need a reliable indicator of the risk," he said.

"Our modeling approach is designed as a key step in this direction," Oppenheimer said. "As the world warms, risks will increase across a variety of fronts, and the threat to coastal infrastructure in the face of an already-rising sea level and potentially stronger hurricanes could be one of the most costly unless we are able to anticipate and reduce vulnerability." 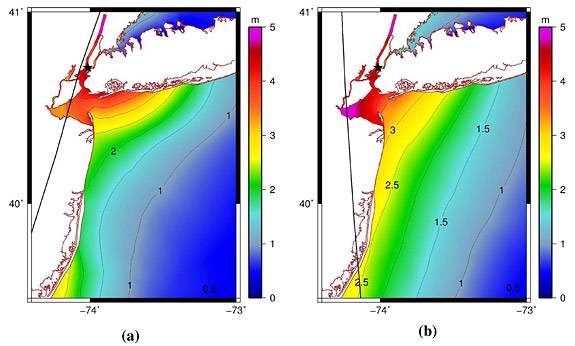 Simulations by researchers from Princeton University and the Massachusetts Institute of Technology revealed that projected increases in sea level and storm intensity brought on by climate change could make devastating storm surges more frequent. Using the New York City area as a model, the researchers found that floods experienced every century could instead occur every one or two decades. The worst simulated flood (left) was a 15.5-foot storm surge at Manhattan's Battery (black star) that stemmed from a high-intensity storm (black line) moving northeast and very close to the city. A weaker but larger northwest-bound storm (right) that was further from the city would result in floodwater nearly 15 feet deep as its strongest winds pushed water toward the Battery. The colored contours represent the maximum surge height, from 0 (blue) to 5 (violet) meters. (Image by Ning Lin)

Lead author Ning Lin, a postdoctoral fellow at MIT, said that knowing the frequency of storm surges may help urban and coastal planners design seawalls and other protective structures. Lin, who received her Ph.D. from Princeton in 2010, began the project at Princeton then continued it at MIT; the current report is based on her work at MIT.

"When you design your buildings or dams or structures on the coast, you have to know how high your seawall has to be," said Lin, noting that Manhattan's seawalls now stand a mere 5 feet high. "You have to decide whether to build a seawall to prevent being flooded every 20 years."

Lin and Oppenheimer worked with study co-authors Kerry Emanuel, an MIT atmospheric science professor, and Erik Vanmarcke, a Princeton professor of civil and environmental engineering. Lin, Vanmarcke and Emanuel also co-wrote a 2010 report on the project published in the Journal of Geophysical Research that was based on Lin's work at Princeton.

Carol Friedland, an assistant professor of construction management and industrial engineering at Louisiana State University, sees the latest results as a useful tool to inform coastal design — particularly, she notes, as most buildings are designed with a 60- to 120-year "usable lifespan."

"The physical damage and economic loss that result from storm surge can be devastating to individuals, businesses, infrastructure and communities," Friedland said. "For current coastal community planning and design projects, it is essential that the effects of climate change be included in storm-surge predictions."

The researchers ran a total of 45,000 storm simulations for the New York City region under two scenarios: current climate conditions from 1981 to 2000 based on observed data and four global climate models; and projected climate conditions for the years 2081 to 2100 based on the four climate models, as well as future carbon dioxide output as predicted by the Intergovernmental Panel on Climate Change (IPCC). Oppenheimer is a longtime participant in the IPCC.

Once the researchers simulated storms in the region, they then simulated the resulting storm surges using three different methods, including one used by the National Hurricane Center (NHC). In the days or hours before a hurricane hits land, the NHC uses a storm-surge model to predict the risk and extent of flooding from the impending storm. Such models, however, have not been used to evaluate multiple simulated storms under a scenario of climate change.

Again, the group compared results from multiple methods: one from the NHC that simulates storm surges quickly, though coarsely; another method that generates more accurate storm surges, though more slowly; and a method in between, developed by Lin and her colleagues, that estimates relatively accurate surge floods, relatively quickly.

The researchers found that the frequency of massive storm surges would go up in proportion to an increase in more violent storms and a rise in sea level, the researchers reported. They noted that climate models predict that the sea level around New York City could rise by 1.5 to nearly 5 feet by the end of the 21st century.

Flooding was amplified by the storm's wind direction and proximity to the city. The worst simulated flood, a 15.5-foot storm surge at Manhattan's Battery, stemmed from a high-intensity storm moving northeast and very close to the city. On the other hand, a weaker but larger northwest-bound storm that was further from the city resulted in floodwater nearly 15 feet deep as its strongest winds pushed water toward the Battery.

Floods of this magnitude outstrip the most devastating storm surges in the city's recorded history, Lin said. The worst accompanied the 1821 Norfolk and Long Island hurricane, which packed winds of 135 miles per hour and is one of only four hurricanes known to have made landfall in New York City since pre-Columbian times.

The study was published online Feb. 14 by the journal Nature Climate Change, and was supported by the U.S. National Oceanic and Atmospheric Administration, and the Princeton Environmental Institute through a fellowship from the Program in Science, Technology and Environmental Policy based in Princeton's Woodrow Wilson School of Public and International Affairs.

Jennifer Chu of MIT contributed to this story.