Under a microscope, a tiny droplet slides between two fine hairs like a roller coaster on a set of rails until — poof — it suddenly spreads along them, a droplet no more.

That instant of change, like the popping of soap bubble, comes so suddenly that it seems almost magical. But describing it, and mapping out how droplets stretch into tiny columns, is a key to understanding how liquids affect fibrous materials from air filters to human hair. And that knowledge allows scientists to better describe why water soaks into some materials, beads atop others and leaves others matted and clumped.

To get those answers, an international team of researchers led by scientists at Princeton University made a series of close observations of how liquid spreads along flexible fibers. They were able to construct a set of rules that govern the spreading behavior, including some unexpected results. In a paper published Feb. 23 in Nature, the researchers found that a key parameter was the size of the liquid drop.

"That surprised us," said Camille Duprat, the paper's lead author. "No one had thought about volume very much before."

Duprat, a postdoctoral researcher in the Department of Mechanical and Aerospace Engineering, said the research team was able to determine drop sizes that maximized wetting along certain fibers, which could allow for increased efficiency in industrial applications of liquids interacting with fibrous materials — from cleaning oil slicks to developing microscopic electronics. The team also discovered a critical drop size above which the drop would not spread along the fibers, but would remain perched like a stranded roller coaster car.

"If in any engineering problem you can learn an optimal size above which something does not happen, you have learned something very important about the system," said Howard Stone, a co-author of the paper.

A study led by researchers at Princeton University has yielded insights into how liquid spreads along flexible fibers, which could allow for increased efficiency in various industrial applications. The team's experiments show that the size of oil droplets determines whether they spread along flexible glass fibers. At the critical size (top two examples), the droplets expand into columns of liquid, but larger droplets sit immobile between the glass rods (bottom example). (Image courtesy of Camille Duprat and Suzie Protière)

Stone, the Donald R. Dixon '69 and Elizabeth W. Dixon Professor in Mechanical and Aerospace Engineering, said the team conducted a series of experiments observing how liquid spread along different types of fibers. The plan was to make broad observations and derive a governing theory from the experiments.

"We had a lot of results and at some point we started having these meetings trying to understand what we had," he said. "We realized the way to think about it was in the way of critical sizes."

Besides Duprat and Stone, the researchers included Alexander Beebe, a Princeton junior majoring in mechanical and aerospace engineering, and Suzie Protière, an associate scientist at the University of Pierre and Marie Curie in Paris. The research at Princeton was conducted with support from Unilever.

The researchers determined that the critical parameters governing how drops interact with flexible fibers were the size of the droplet, the flexibility and radii of the fibers, and the geometry of the fiber array (such as the space and angle between pairs of fibers).

The experiment examined the behavior of a droplet placed on a pair of flexible glass fibers that was clamped at one end and free at the other. When the drop was placed at the clamped end of the pair, the fibers bent inward and the drop moved toward the free end. As the drop moved further out, the fibers bent more, and the drop accelerated and elongated. At some point, the drop spontaneously spread and formed a liquid column between the now-coalesced fibers.

To understand the critical drop size at which no spreading occurred, the researchers measured the distance between the fibers at the instant that the spreading began. They concluded that spreading occurs when the spacing between the fibers dictates that it takes less energy for the liquid to form a column than it does to remain as a drop. The researchers were also able to use their observations to calculate an optimal drop size that resulted in a maximum spread of liquid along the fibers. 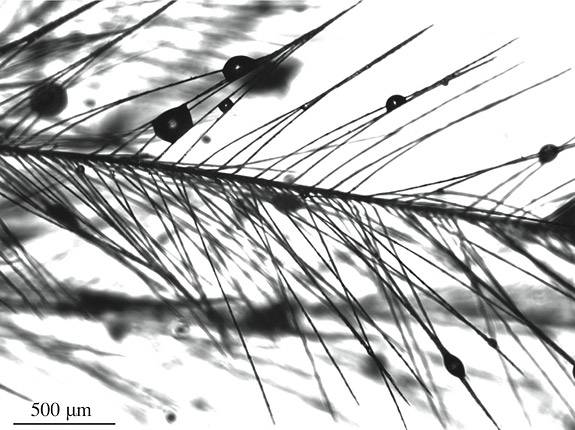 In the researchers' study of natural fibers, oil applied to goose feathers shows how droplets of smaller volumes spread along the fibers and cause clumping, while larger droplets do not. The finding could prove important for cleaning waterfowl after accidental spills. (Image courtesy of Camille Duprat and Suzie Protière)

The researchers said their findings could have a wide array of applications. Waterfowls' feathers, for example, are a natural array of fibers that keep the birds warm and dry. When oil coats the feathers, it disrupts the fiber arrangement by clumping the feathers. Using goose feathers, the team found that oil droplets above a certain size did not spread along the fibers and allowed the feather to be cleaned more easily. Duprat said the findings could have implications for methods used to rescue injured birds and also for dispersants applied to oil slicks after accidents.

On the other hand, items such as aerosol-removal filters or hairsprays require total spreading along fibers for effectiveness. The control of droplet sizes could also prove important for the fabrication of microstructures by resulting in the optimal spread of liquid material along pillars and similar forms, such as those found in various forms of lithography used in micro- and nanofabrication.

"Materials react differently to different drop sizes," Duprat said. "You can design a material to react to a specific drop size or you can produce a drop size to affect a specific material."