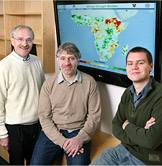 Researchers from Princeton University's Department of Civil and Environmental Engineering — from left, Professor Eric Wood, research scholar Justin Sheffield and graduate student Nathaniel Chaney — have created a computer model to track drought in remote or war-torn regions of Africa that are difficult for ground-based observers to reach. Experts believe their monitoring project may go a long way in addressing problems related to water shortages that have long plagued Africa.

Drought is often the precursor to disaster, but getting leads on its stealthy approach through remote or war-torn areas can be so difficult that relief agencies sometimes have little time to react before a bad situation becomes a calamity.

The problem is that there is often no easy way to get data about water supplies in these areas — water monitoring stations don't exist, or they don't work, or they are simply too dangerous to operate. Groups such as AGRHYMET, an intergovernmental hydrology, agricultural and food security agency based in Niger, often have to rely on far-flung observers, often volunteers, to obtain the information manually.

"AGRHYMET conducts the drought monitoring for the whole of West Africa from Cape Verde and Mauritania to Chad and Nigeria," said Abdou Ali, a senior scientist with the organization. "Many areas of this region are drought prone. The ground-based data is not enough and even when the data exists, the transmission system is very weak."

But researchers at Princeton University have come up with an approach that dodges those problems and uses satellite data and historical records to track drought as it emerges. Experts believe their monitoring project, installed this month at AGRHYMET's research center in Niamey, Niger, may go a long way in addressing problems related to drought that have long plagued Africa.

"Water scarcity is a critical issue," said Eric Wood, the head of the Princeton team. "What are the signatures in weather and climate that precede a drought? What takes you out of drought? If you don't have the objective monitoring, you can't do the predictions." 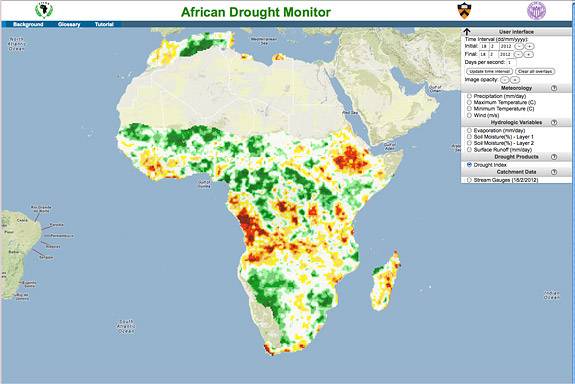 The drought monitor, shown in this screen capture, allows researchers, government officials and aid workers to track conditions through an Internet connection. The system enables users to observe water shortages by location and over time.

Because data is not available for many areas of the continent, the Princeton researchers use a mathematical model to simulate the water cycle and, from this simulation, determine when specific regions enter into drought. They combine patterns simulated from decades of climate records with current temperature measurements and with precipitation data from satellites. Essentially, the model maps the landscape and provides a likely estimate of hydrological conditions based on current inputs and historical patterns.

"The most important thing it gives you is spatial patterns," said Justin Sheffield, a research scholar in Princeton's civil and environmental engineering department. "It gives you the overall picture of what is dry and what is wet. You can say this region is in drought and it has been in drought for the past several months."

Putting those patterns together can be critical for agencies preparing to respond to famines or other crises spawned by drought. They may get very accurate reports from some regions, but lack of information can make it difficult to respond to other areas.

"The difficulty oftentimes is connecting all the dots," said Frank Catania, deputy director of humanitarian response for the aid organization Oxfam America. "You are seeing things in one area, but other groups are seeing other things in other areas. Who puts all that data together?"

Drought monitoring within the United States is handled by several models operated by the federal government. One of them, the Variable Infiltration Capacity model, was developed by researchers from Princeton and the University of Washington.

"We started thinking how we could use the drought model globally," said Wood, the Susan Dod Brown Professor of Civil and Environmental Engineering. "There was interest in Africa because of the challenges involved and the lack of an available model to monitor drought conditions across the continent."

Drought and floods account for 80 percent of deaths and 70 percent of economic damage caused by natural disasters in Africa, according to a 2007 report by the United Nations. The drought that struck Zimbabwe in 1991 is a good example. According to the United Nations, the country's agricultural output dropped 45 percent, its stock market fell 65 percent and the gross national product declined 11 percent.

More recently, drought has led to widespread famine in East Africa, and there is concern in coming years about drought-related hunger in the Sahel region, the band of savanna that runs through several countries along the southern edge of the Sahara desert.

Support from the United Nations and NASA

A conversation at a 2006 international conference on the hydrological impacts of climate change led to a working arrangement between the Princeton team and the United Nations Education, Scientific and Cultural Organization (UNESCO).

"Africa is a priority for UNESCO, so it fits very well into the strategy to make sure that we have a system in place to have an early warning on drought," said Siegfried Demuth, chief of hydrological systems for UNESCO's Division of Water Sciences. "We are looking to provide the knowledge base, the tools, with which countries can be better prepared."

Demuth said the drought monitor will also help countries plan for long-term water management, whether that involves water supply projects or irrigation for agriculture. The ability to track water supplies over the long run — decades rather than years — can be critical to building reservoirs, planning for growth or for selecting crops.

"Many of these countries do not have the infrastructure to monitor water resources," he said. "This system helps us to work in these data-sparse areas."

Demuth said a priority for UNESCO was developing a tool that African users could contribute to in terms of research and further development. To that end, the Princeton researchers have designed the system so that users can fine-tune its accuracy by comparing the model's results with data taken from ground stations in their region, and to use the data for related research such as crop monitoring or climate change assessments.

"The hope is that we are going to build and expand on the idea through our African collaborative research network, which is supported through the University's Council for International Teaching and Research," Wood said. 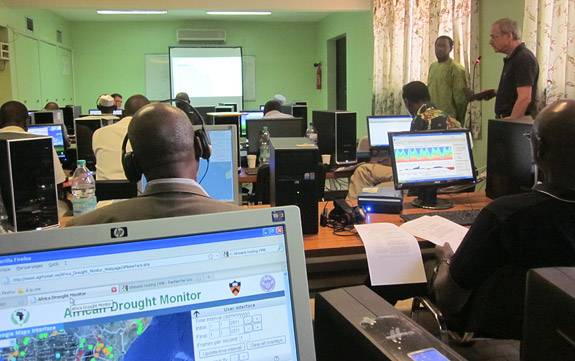 Wood (right) speaks with scientists at the AGRHYMET research center in Niamey, Niger. The Princeton team recently installed the drought monitor at AGRHYMET, an intergovernmental hydrology and food security agency, and are scheduled to deploy the system in Kenya later this year. (Photo by Justin Sheffield)

Wood said this month's trip to Niger was very successful. The Princeton team has been asked by UNESCO to install the system at ICPAC, a climate prediction and applications center located in Nairobi, Kenya, with responsibilities that include drought assessment for the Greater Horn of Africa region. The Princeton group expects to install the system and hold a training workshop this June.

Wood said it was important for the project's future that African researchers develop ways that the model can best suit local needs. He said the workers in the field will also be able to suggest ways to improve the model and to provide data that will lead to further refinement of its accuracy.

"We want the feedback," he said. "We have the technology, the knowledge, to do this but what we need to know is how useful this is for people on the ground. At the end of the training session in Niamey, we developed with the participants a rather long list of possible upgrades and additional capabilities that they would find useful."

Ali, the senior hydrologist with AGRHYMET, said researchers will be working to calibrate the model and to increase the amount of ground data used in its calculations. He said it would be helpful to generate other variables, such as solar radiation, and to make comparisons with selected reference years.

"With that, the system will have important added value when we consider regional data," he said.

Wood and Ali both said it is critical to adjust the model to reflect data from the local environment that might not be apparent from a larger view. In part, that reflects the complex nature of water supplies and the environment. Drought is not simply a lack of water; it is lack of sufficient water. That can mean harm to crops or hydroelectric power as well as more catastrophic failures in water supplies.

"To get a handle on whether this is a drought or not, you really need to figure out the impacts," Sheffield said. "Is this affecting people? Is it affecting food, or food security? For some crops it may not matter, for some it matters a great deal, for a reservoir it might not matter at all."

Much of the real-time data used in the model comes from precipitation reports from satellites such as NASA's Tropical Rainfall Measuring Mission, or TRMM. From about 250 miles above the earth, TRMM uses radar to measure across large areas of the planet. The Princeton model is designed to automatically download TRMM data from NASA and use it to calculate current conditions on the ground.

Wood said that NASA has planned launches for the next decade that will provide additional data, including soil moisture readings and river discharge, that could be used to improve the model's accuracy.

The first of those projects, the Global Precipitation Measurement, is scheduled for launch in 2014. Arthur Hou, the mission scientist for the NASA project, said it will consist of eight satellites linked to a central observatory that will provide observations of rain and snow across the entire globe every three hours. Hou said that space observation is the most practical method of measuring precipitation across much of the earth's surface.

"Given that 70 percent of the earth is covered with oceans and that ground radar-gauge networks are very limited over many parts of the world, a comprehensive picture of the space-time variability of precipitation can only be obtained from the vantage point of space," he said.

Putting it together with Google Maps

Wood's group wanted to make the drought monitor widely available through the Internet. The challenge was making an interface simple enough to learn in a few minutes, but powerful enough to convey the model's scientific data.

Nathaniel Chaney said Google Maps was the answer. Chaney, a graduate student in civil and environmental engineering, took on the task of translating the drought monitor's reports into a version that can be read through Google.

"We wanted to be able to provide the data in such a way that research scientists and policymakers around Africa could access and manage the data in a simple and intuitive manner," he said. "We wanted them to see what we see, but in a more accessible way."

Chaney said Google Maps allows users with relatively poor Internet connections to use the monitor effectively. It presents the monitor's reports directly on the map and allows users to track water shortages, or floods, by location and over time; downloading the associated data is also an option. Right now, the monitor operates in English but the team plans to expand to other languages as well.

The goal is to distribute information widely that can help people deal with water shortages before they become disasters.

"There may be another jump between what we are producing and what is really useful for people on the ground, but that is what we are relying on our collaborators for," Sheffield said. "That is the kind of thing that interests me — turning this into a practical tool that can help save lives and prevent people from going hungry."