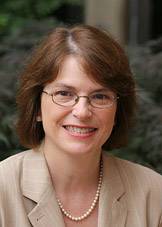 Christina Paxson, dean of Princeton University's Woodrow Wilson School of Public and International Affairs, has been selected to serve as the next president of Brown University. The Corporation of Brown University voted on her appointment in a special session March 2.

Paxson, who is also the Hughes-Rogers Professor of Economics and Public Affairs, will succeed Ruth Simmons. Paxson will remain at Princeton through June 30, the end of the academic year, and will assume her new role on July 1.

"The search committee at Brown University has made a truly inspired choice for its 19th president, although it means that Princeton will lose one of its most distinguished faculty members and effective academic administrators," said Princeton President Shirley M. Tilghman. "At every stage of her 26 years at Princeton, Chris Paxson has left an indelible mark on this University. Chris has consistently shown the kind of good judgment and admirable leadership that makes her a natural choice as Brown's president. As sad as I am to lose her as a colleague at Princeton, it will be a great pleasure to welcome her to the Council of Ivy Presidents."

Paxson has served since July 2009 as the dean of the Wilson School, where she initiated a review of both the Master in Public Affairs curriculum and the undergraduate major. Notably, the latter review ended the selective admission process for the undergraduate major and restructured the curriculum by establishing new prerequisites, expanding the core curriculum, and increasing training in research methods. She also established the Julis-Rabinowitz Center for Public Policy and Finance.

"My experience at Princeton has been very rewarding. I have been given incredible opportunities to develop as a teacher, scholar and administrator," Paxson said. "It has been a great privilege and joy to lead the Woodrow Wilson School. Although I am eager to begin my new life at Brown University, it will be difficult for me to say goodbye to the many friends — colleagues, students and Princeton alumni — I have come to know over my years at this remarkable university."

A Phi Beta Kappa graduate of Swarthmore College, Paxson earned her Ph.D. from Columbia University and joined the Princeton faculty in 1986.

She is a research associate of Princeton's Office of Population Research and of the National Bureau of Economic Research and a senior editor of The Future of Children, a policy journal published jointly by the Wilson School and the Brookings Institution. Paxson is chair of the board of trustees of the Center for Health Care Strategies and a senior fellow of the Bureau for Research and Economic Analysis of Development.

Before her tenure as the Wilson School dean, she served as chair of the Department of Economics from 2008 to 2009 and as associate chair from 2005 to 2008. As founding director of the interdisciplinary Center for Health and Wellbeing from 2000 to 2009, Paxson launched a graduate certificate program in health and health policy in 2003 and began an undergraduate certificate program in global health and health policy in 2008. In that role, she also served as the founding director of the National Institute on Aging Center for the Economics and Demography of Aging and director of the Adel Mahmoud Global Health Scholars Program, and she helped launch the Grand Challenges program, leading the Health Grand Challenge.

Paxson was faculty chair of the Master in Public Affairs program from 1997 to 1999, and won numerous teaching awards from the program's students.