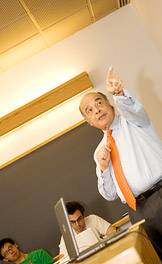 Adel Mahmoud, formerly the head of Merck Vaccines, joined the Princeton faculty to pursue research and teaching on global health issues from both scientific and policy perspectives. "The thing that is missing in most other places is Princeton's ability to deal with the complexity of the global health issue from the point of view of policy, economics, sociology, ecology and psychology," Mahmoud said of his decision to come to the University. "Where else in the world can you find all of this in one institution?" (Photo: Brian Wilson)

After a quarter-century in academic medicine and eight years at the helm of Merck Vaccines, joining the faculty at Princeton was the most compelling next step for global health expert Adel Mahmoud.

An authority on the development and deployment of vaccines, Mahmoud has learned firsthand that the importance of a multidisciplinary approach to tackling infectious diseases cannot be overestimated. That is why he came to the University in 2007 as a senior policy analyst in the Woodrow Wilson School of Public and International Affairs and a lecturer with the rank of professor in the Department of Molecular Biology.

"On the one hand, there is as significant a scientific existence here -- in molecular biology, genomics, chemistry and neuroscience -- as at the best medical schools in the country," Mahmoud said. "On the other hand, the thing that is missing in most other places is Princeton's ability to deal with the complexity of the global health issue from the point of view of policy, economics, sociology, ecology and psychology. Where else in the world can you find all of this in one institution?"

During his tenure as president of Merck Vaccines, Mahmoud spearheaded the development of vaccines against rotavirus, shingles and human papillomavirus, as well as a combination shot to prevent measles, mumps, rubella and chickenpox.

These shots may have the potential to save billions of lives every year, but Mahmoud knows that they are only as effective as the programs in place to distribute them. Mahmoud, a member of the Expert Advisory Panel on Parasitic Diseases of the World Health Organization (WHO), is now conducting research to understand and overcome roadblocks to more widespread use of the vaccines.

Consider rotavirus, which causes severe diarrhea and is responsible for 600,000 deaths every year, 99 percent of which occur outside the United States and Europe.

"The development and use of the rotavirus vaccine in our country and Europe is a tremendous scientific achievement," Mahmoud said. "But the global impact of this vaccine will be far more tremendous. We have to see that it is introduced and implemented globally."

Mahmoud's research also is addressing the need for a new immunization regime to prevent cervical cancer-causing human papillomavirus, the most common sexually transmitted disease. Every year, 250,000 women die from cervical cancer, 80 to 90 percent of whom are in the developing world.

A second major research focus of Mahmoud's is bioterrorism and the interrelation of science and security. Currently he is a member of the National Science Advisory Board for Biosecurity, overseen by the National Institutes of Health, and the Committee on Scientific Communications and National Security of the National Academy of Sciences.

"Because of advances in technology, in many parts of the world today the capabilities exist to develop and use infectious diseases for harm," Mahmoud said. "What is important is to develop boundaries and to develop concepts about responsibility and how to deal with these organisms and technologies. The United States standing alone isn't going to be enough here. It really has to be a global effort."

Here Mahmoud leads a session of "Infection: Biology, Burden, Policy," one of two new courses that he is teaching this semester with colleagues in the Woodrow Wilson School of Public and International Affairs and the Department of Molecular Biology. (Photo: Brian Wilson)

After growing up in Egypt, where infectious diseases were an omnipresent reality, Mahmoud earned his medical degree at the University of Cairo and went on to obtain his Ph.D. in clinical tropical medicine from the University of London School of Hygiene and Tropical Medicine.

His academic training and professional experiences at Case Western Reserve University and University Hospitals of Cleveland -- where he served for 11 years as chair of medicine and physician-in-chief -- as well as his time at Merck, convinced Mahmoud of the importance of a real-world, interdisciplinary approach to disease and health.

From his early days at Case Western Reserve, Mahmoud established intense laboratory-based research programs focusing on defenses against multicellular infectious organisms. These studies defined the central role of eosinophils, a type of white blood cell, in the killing of such invading organisms. Committed to practical applications of his research results, Mahmoud worked for many years alongside scientists in Kenya, Egypt and the Philippines to develop strategies for controlling endemic diseases, including schistosomiasis -- a disease caused by parasitic worms that has infected more than 200 million people worldwide -- and other neglected tropical infections. These strategies now have been adopted globally. 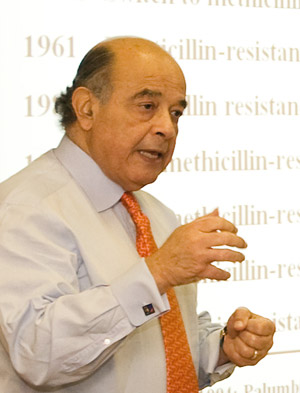 Through his activities and teaching at Princeton, Mahmoud is helping prepare students to take the necessary integrated approach to problems of global health. (Photo: Brian Wilson)

"Adel has a unique career history that allows him to provide an amazing range of perspectives from detailed biology to epidemiology and then to policy issues," said Singer, the Charles and Marie Robertson Professor of Public and International Affairs. "Adel's enthusiastic and thoroughly engaging personality, supported by a wonderful sense of humor, facilitates student involvement in all aspects of our course."

Given the varied backgrounds of Mahmoud, Singer and Shenk, students in that course are given a multidimensional view of infectious disease, focusing on everything from the biology of infection to the role of international organizations such as the WHO and UNICEF in addressing disease threats.

"When anyone has a question in class, [Professor Mahmoud] is able to fill it in with his personal experiences," said Rachel Rizal, a junior in the Wilson School. "His class is structured in a way in which people are encouraged to ask about anything relating to infectious diseases, and it's a great learning experience, whether a student is more interested in the biology behind a vaccine or the public policy effects."

In his course with Rosenberg, Mahmoud is helping students delve into the research enterprise in the United States, including both its greatest achievements and most significant challenges.

Sharing the course with Mahmoud "has been a great pleasure," Rosenberg said. "He brings remarkable assets to this task: distinguished personal science in the area of infectious disease; major administrative leadership in academia and industry; longstanding advocacy of a greater national commitment to improve global health; and a special brand of warmth and empathy so important to undergraduate education at Princeton."

The students in Mahmoud's courses are not the only ones at Princeton who are benefiting from his presence: The Merck Company Foundation recently created the Adel Mahmoud Global Health Scholars Program and Lecture Series in Global Health at Princeton, based at the Wilson School's Center for Health and Wellbeing.

Beginning last fall and continuing through 2011, the scholars program funds travel and research costs for four juniors each year to support internships and senior thesis work in the field of global health. Rizal is one of the inaugural Global Health Fellows, along with classmates Taher Modarressi, Karen Lillie and Alice Easton.

Modarressi, a molecular biology major, said he has benefited from working with Mahmoud in researching the biochemical aspects and use of a relatively new recreational drug in Iran, called "crack," which is distinct from the cocaine-based drug known by the same name in the United States.

"Even though my research is not directly involved with his primary field of research, [Professor Mahmoud] still exhibits a passion for learning the material, and his dedication and commitment to advising my project serve as a constant source of motivation for me," Modarressi said. "It seems like he always has the answer and always gives the crucial piece of advice that makes some aspect of the study really take off. From the personal side, he has a great sense of humor and really makes you feel comfortable in his office."

The inaugural event in the lecture series, "No Country Left Behind: Transforming Global Health," was held April 1 and featured a keynote address on HIV/AIDS by Anthony Fauci, director of the National Institute of Allergy and Infectious Diseases at the National Institutes of Health. The event also included a panel discussion moderated by President Shirley M. Tilghman and featuring Bill Frist, the former U.S. Senate majority leader and a physician who is now a visiting lecturer in the Wilson School, along with other global health experts.

In addition to the scholars program and lecture series, the University recently has launched other initiatives focused on global health. Health is one of three major research areas in the Grand Challenges Program, a joint effort by the Wilson School, the School of Engineering and Applied Science and the Princeton Environmental Institute to address complex global issues. Additionally, Mahmoud helped guide the creation of a new undergraduate certificate program in global health and health policy, which will launch this fall.

"Our approach to global health at Princeton is multifaceted: We're reaching out across campus and across disciplines and we're translating this into very defined activities in education and research," Mahmoud said. "If someone had said to design a global health program, no one would have come up with anything better than this."