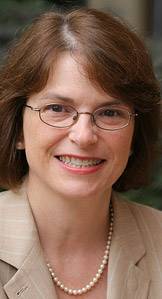 Christina Paxson, a Princeton faculty member since 1986 who is the Hughes-Rogers Professor of Economics and Public Affairs and chair of the Department of Economics, has been selected as dean of the University's Woodrow Wilson School of Public and International Affairs. Her appointment is effective July 1.

Paxson is the founding director of the Center for Health and Wellbeing, an interdisciplinary health research center in the Woodrow Wilson School, and is a senior editor of The Future of Children, a policy journal published by the school and the Brookings Institution. She also is a research associate of Princeton's Office of Population Research and of the National Bureau of Economic Research, where she is a member of the programs on aging, health and children. Before founding the Center for Health and Wellbeing in 2000, Paxson was faculty chair of the school's master in public affairs program.

"I am enormously pleased that Professor Paxson has agreed to serve as dean of the Woodrow Wilson School," said President Shirley M. Tilghman. "We conducted a national search for this position, but soon realized we had to look no further than our own faculty for a renowned leader in the field of public and international affairs. In every role she has taken on at the University, Chris has exhibited the kind of vision, good judgment and ability to get things done that will be needed to build upon the Woodrow Wilson School's strengths and to steer us toward excellence in interdisciplinary teaching and scholarship."

Paxson said she was honored to be selected as the school's next dean. "During my time at Princeton, I've become deeply committed to the school's mission of preparing students for public service and producing first-rate research that informs our most important domestic and international policy issues," she said. "It's been wonderful to see how the school has changed and grown over time, so that it can fulfill that mission in the best way possible. I am looking forward to working with the Woodrow Wilson School community -- faculty, students, alumni and staff -- to continue to make the school even better than it is today."

A Phi Beta Kappa graduate of Swarthmore College, Paxson joined the Princeton faculty after earning her Ph.D. from Columbia University. Under her leadership, the Center for Health and Wellbeing launched a graduate certificate program in health and health policy in 2003 and began an undergraduate certificate program in global health and health policy in 2008. Focusing on both domestic and international aspects of health policy, the center also sponsors major ongoing research projects and hosts visitors, seminars and academic roundtables.

Since 2007, Paxson has served as director of the Adel Mahmoud Global Health Scholars Program and Lecture Series in Global Health. The program provides students with funding for travel and research to pursue global health-related internships and senior thesis research, and the series brings leading experts to campus to speak about aspects of global health policy.

Also in 2007, the center joined the University's Grand Challenges Initiative, an integrated research and teaching program co-sponsored by the Woodrow Wilson School, the Princeton Environmental Institute and the School of Engineering and Applied Science. The program is designed to promote student involvement and faculty research on issues related to the environment, technology and public policy. Paxson directs the Health Grand Challenge, which addresses the problem of infectious disease around the globe, particularly the heavy burden it imposes on developing countries.

Paxson's own research focuses on economic status and health outcomes over the lifespan in both developed and developing countries. She has been the principal investigator on numerous National Institutes of Health-funded studies, including "Economic Status, Public Policy and Child Neglect," "Parental Resources and Child Wellbeing" and "College Education and Health." She is currently the principal investigator for an NIH-funded study of the effects of Hurricane Katrina on low-income parents, and is the director of the National Institute on Aging Center for Demography of Aging at Princeton. Recently, Paxson has studied the effects of economic deprivation on the health and cognitive development of children in Ecuador, and the consequences of the AIDS epidemic for the quality of health care in Africa.

Paxson is a member of the board of directors of the Center for Health Care Strategies and a senior fellow of the Bureau for Research and Economic Analysis of Development. She served as associate chair of Princeton's economics department from 2005 to 2008 and as chair for the past year. She has received multiple teaching awards from the Woodrow Wilson School, where she has led courses in microeconomic policy and economic development.

Paxson will succeed Anne-Marie Slaughter, who resigned in January as dean after six years and took a public service leave from the faculty to become director of the policy planning staff at the U.S. State Department. Mark Watson, the Howard Harrison and Gabrielle Snyder Beck Professor of Economics and Public Affairs, has been serving as interim dean.

The Woodrow Wilson School of Public and International Affairs was founded at Princeton in 1930 as a small, interdisciplinary program at the undergraduate level. A graduate professional program was added in 1948 and significantly expanded in 1961 following a gift of $35 million from Charles and Marie Robertson. The school has become a major international center of advanced training and research in public affairs. Its graduates include leaders in domestic and international government positions as well as leaders of private, nonprofit and nongovernmental organizations.