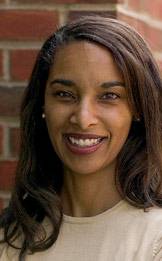 Cecilia Rouse, a Princeton faculty member for two decades who is the Lawrence and Shirley Katzman and Lewis and Anna Ernst Professor in the Economics of Education, has been selected as dean of the University's Woodrow Wilson School of Public and International Affairs. Her appointment is effective Sept. 1.

Rouse, a well-known scholar of the economics of education, is the founding director of the Princeton Education Research Section and a member of the National Academy of Education. She is a senior editor of The Future of Children, a policy journal published by the Wilson School and the Brookings Institution, and serves on the editorial board of the American Economic Journal: Economic Policy.

From 2009 to 2011, Rouse served as a member of President Barack Obama's Council of Economic Advisers, a three-member panel that provides the president with analysis and advice on a wide range of domestic and international economic policy issues.

"It is a great pleasure to announce the appointment of Cecilia Rouse as the dean of the Woodrow Wilson School," said Princeton President Shirley M. Tilghman. "Her scholarly distinction in the fields of labor economics and education policy, coupled with her extensive experience in Washington, epitomize the best of the school's tradition of applying rigorous social science research to inform public policy. She is also highly regarded as a dedicated teacher and mentor to her students. I look forward to working with her as she builds upon the great strengths of the school."

Rouse said she was honored to be selected as the school's next dean.

"I am delighted to be offered this opportunity to serve as dean of the Woodrow Wilson School, where I have very happily taught and conducted research for the past 20 years, and to build on the exceptional leadership of my predecessors," Rouse said. "My goal will be to elevate even further the school's stature and impact in the policy arena — it should be the go-to place for anyone interested in dynamic, insightful, timely domestic and international policy analysis and dialog, and where a diverse set of undergraduate and graduate students are trained to become the policy leaders of the future."

"Ceci will be a wonderful leader for the school. She is an outstanding scholar with real Washington experience, and she is fully committed to the values and mission of the school," Eisgruber said. "Her expertise in education policy — a topic of great interest to our students and alumni, as well as to the nation at large — will be yet another asset for her deanship. I'm confident that she will be a superb steward of the school's tradition of first-rate teaching, world-class research and impactful policy analysis."

Rouse joined the Princeton faculty in 1992 after earning her Ph.D. in economics from Harvard University. That same year, she joined the Industrial Relations Section, which functions as a research bureau, a reference library and the sponsor of research seminars. She later served as director of the section, from 2006 to 2009.

She worked for a year in the White House at the National Economic Council from 1998 to 1999.

In 2001, she started the Education Research Section, an interdisciplinary unit within the Industrial Relations Section and the Wilson School that promotes the use of research in education decision-making.

Rouse's primary research interests are in labor economics with a focus on the economics of education. She is the author of prominent papers on topics including the economic benefit of community college attendance; the existence of sex discrimination in symphony orchestras; the consequences of Milwaukee's private school voucher program on student achievement; the effect of student loan debt on career choices of college graduates; and the impact of computer-assisted instruction on students' performance in reading and mathematics.

While most of Rouse's scholarly work has focused on domestic policy issues, she spent the year following receipt of her undergraduate degree from Harvard studying at L'Université de Cheikh Anta Diop in Senegal. She has also researched poverty in Sri Lanka and unions in South Africa.

Rouse will succeed Christina Paxson, who resigned in June after three years as dean of the Wilson School to become president of Brown University. Anne Case, the Alexander Stewart 1886 Professor of Economics and Public Affairs, has been serving as interim dean.

The Woodrow Wilson School of Public and International Affairs was founded at Princeton in 1930 as a small, interdisciplinary program at the undergraduate level. A graduate professional program was added in 1948 and significantly expanded in 1961 following a gift of $35 million from Charles and Marie Robertson. The school has become a major international center of advanced training and research in public affairs. Its graduates include leaders in domestic and international government positions as well as leaders of private, nonprofit and nongovernmental organizations.