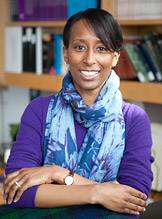 Professor of Psychology Nicole Shelton has been named master of Butler College, one of Princeton's six residential colleges. She will begin her four-year term on July 1.

Shelton will succeed Sanjeev Kulkarni, a professor of electrical engineering and director of the Keller Center for Innovation in Engineering Education, who has served as the master of Butler College since 2004.

Shelton, who joined the Princeton faculty in 2000, focuses her research and teaching on understanding prejudice and discrimination from the target's perspective. She has received two of the University's top teaching awards, the Graduate Mentoring Award in 2011 and the President's Award for Distinguished Teaching in 2008.

The appointment was announced by Dean of the College Valerie Smith and Dean of Undergraduate Students Kathleen Deignan. A faculty member serves as the head of each of Princeton's residential colleges. The masters work closely with their staffs to build supportive communities and to devise programs and activities to extend education beyond the classroom.