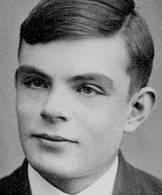 Alan Turing, who conceived of the modern computer decades before it came into existence, earned his Ph.D. from Princeton University in 1938. His dissertation, titled "Systems of Logic Based on Ordinals," made important contributions to both computer science and mathematics.

Considered the father of computer science, Alan Turing earned his Ph.D. in mathematics from Princeton in 1938. Andrew Appel, chair of the Department of Computer Science, discusses Turing's legacy in this video.

Princeton is hosting a conference May 10-12 in honor of the centennial of Turing's birth. Featured speakers include Google executive chairman Eric Schmidt, a 1976 Princeton alumnus, and eight winners of the Turing Award, often considered the computer science equivalent of the Nobel Prize. Registration to the conference is free and open to the public.

Speakers will be discussing Turing's legacy as well as the future of computing. In addition to Schmidt, presenters include Internet pioneer and 1964 graduate alumnus Robert Kahn on managing distributed information; Barbara Liskov of the Massachusetts Institute of Technology (MIT) on modern programming languages; James Murray, Princeton University senior scholar of applied and computational mathematics, on mathematical biology; Ronald Rivest of MIT on cryptography, Leslie G. Valiant of Harvard University on computing as a natural science; Gödel Prize winner and 1983 graduate alumnus Avi Wigderson of the Institute for Advanced Study on proving computational hardness; and Andrew Chi-Chih Yao of Tsinghua University on quantum computing.

Appel, a 1981 Princeton alumnus, is the editor of a new edition of Turing's Princeton Ph.D. thesis that wil be issued by Princeton University Press this month.