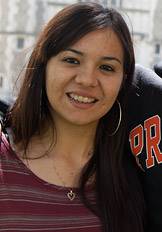 Ana Alvarez, a Princeton senior who is graduating on June 5, is the first in her family to go to college. Her two brothers, junior Cesar and freshman José, also are Princeton students. All three are aspiring engineers.

Photos by Nick Barberio and the Alvarez family

When Princeton senior Ana Alvarez joins her classmates at Commencement on Tuesday, June 5, she will be searching the crowd for two faces: her father and mother, Juan and Herminia Alvarez. Ana will be the first in her family to graduate from college, and while she is a pioneer, her two brothers, junior Cesar and freshman José, are following in her footsteps at Princeton.

The video feature "A Princeton Story" chronicles their journey to Princeton and their academic and personal experiences on campus, including each sibling's path toward engineering.

Ana and her family crowded around the computer as Ana read her acceptance email and learned about her financial aid package from Princeton four years ago. "It wasn't until my father started telling the news to his co-workers at the grocery store, where he has worked for 25 years, that he realized what a big deal this was," Ana said.

The Alvarez family lives in Skokie, Ill., after starting out on the  South Side of Chicago after Juan and Herminia immigrated to the United States from Coculiten, Mexico. Educated through the sixth grade, Juan worked as a teenager harvesting corn and beans. He met his wife in grade school. Married in 1986 and planning ahead for their family, the couple moved to the United States with the goal of providing better educational opportunities for their future children.

"From a very young age, I knew I was going to have to take charge," Ana said. "My father speaks little English, and my mother, who only went to school through fourth grade, speaks none."

At Princeton, Ana is majoring in chemical and biological engineering with certificates in Spanish and materials science and engineering. She is a member of Chicano Caucus and Acción Latina, through which she tutored English as a Second Language students in Trenton, N.J. Having moved swiftly to the top of the student management ranks in Dining Services, she is coordinator in the Rockefeller-Mathey College Dining Hall. After graduation, she plans to return to Chicago and pursue an engineering job in the industrial sector.

Cesar, a year younger than Ana, said he was literally jumping off the walls when his sister learned of her acceptance to Princeton. "I grabbed her and spun her around and told her, 'This means so much, just to go to college, but to come to Princeton is a blessing,"' he said. The next year, he also was accepted to Princeton.

Having his sister on campus to help support him also has been "a blessing," Cesar said. Like his sister, he is an aspiring engineer and is majoring in mechanical and aerospace engineering. He works as a coordinator in Dining Services at Wilcox Hall and plays club and intramural soccer.

"Academically, Princeton has so much to offer, with world-renowned professors I can interact with, who teach me how to discover ways to tackle problems," Cesar said. He said he was drawn to his major by the design projects he saw seniors working on during the engineering open houses at Princeton Preview, a three-day program for accepted students sponsored by the Office of Admission. Cesar said his dream job "would be to work for a car manufacturer in design."

"The expectations were high that I go to Princeton," said the youngest, José. Fascinated by bridges and roads, José said he has "fallen in love with civil engineering." Like his siblings, he also works in student management in Dining Services, as a captain at the café in Robertson Hall.

On campus, the three siblings get together often to dine and study, play soccer and introduce one another to their circles of friends.

Acknowledging the mentoring roles his brother and sister have played for him, José hopes to take on his own mentees at Princeton and "help them experience some of the things I've experienced — to have someone there for you."