An installation of 12 monumental sculptures by the renowned Chinese artist and social activist Ai Weiwei will be on view at Princeton University for one year beginning Wednesday, Aug. 1. The artist's "Circle of Animals/Zodiac Heads" will be located at Scudder Plaza in front of Robertson Hall, home of the Woodrow Wilson School of Public and International Affairs.

"Circle of Animals/Zodiac Heads" has been shown around the world in cities including Sao Paulo, London, Los Angeles and Taipei. The sculptures have been loaned to the University by the family of an alumnus who wishes to remain anonymous. The exhibition is sponsored by the Princeton University Art Museum and the Wilson School, which has invited Ai to participate in a series of events at Princeton on Wednesday, Oct. 10. 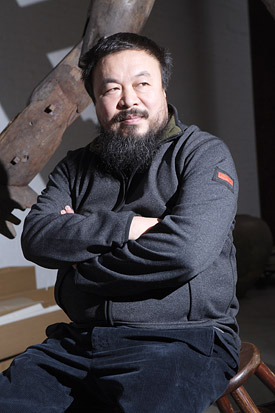 Ai Weiwei, an internationally acclaimed artist from China whose works have been distributed worldwide, poses for a portrait. Ai's "Circle of Animals/Zodiac Heads" sculptures will be displayed on the Princeton University campus for one year beginning Aug. 1. (Photo courtesy of the artist's studio and AW Asia)

Ai is one of China's most prolific and controversial artists. His work in recent years has included collaboration on the design of the Beijing Olympic Stadium or "Bird's Nest" for the 2008 Olympic Games; "Sunflower Seeds," an exhibition at London's Tate Modern museum featuring 100 million hand-painted porcelain seeds; and the use of social media to advance artistic objectives, free speech and human rights. A retrospective of the artist's work is to open at the Hirshhorn Museum and Sculpture Garden in Washington, D.C., on Oct. 7.

In "Circle of Animals/Zodiac Heads," Ai draws inspiration from sculptures that once adorned the fountain clock at Yuanming Yuan, an imperial retreat outside Beijing, representing the signs of the zodiac (snake, horse, ram, monkey, rooster, dog, pig, rat, ox, tiger, rabbit and dragon). Designed by Italian artist Giuseppe Castiglione in the mid-18th century, the original works were looted in 1860 when France and Britain invaded China. Of the 12 figures, only seven are known to have survived. Five have been repatriated to China, but ownership of the remaining two remains contested.

Ai's re-envisioning of the work represents an intriguing intersection of history and politics and is a reflection on the complexities of authenticity and derivation. "Circle of Animals/Zodiac Heads" reinterprets art that was commissioned by a Qing dynasty emperor, designed by an Italian artist, engineered by a French Jesuit mathematician and was accessible only to the elite circles of 18th-century Chinese society and thus raises issues about repatriation, shared cultural heritage and contemporary expectations regarding the democratization of art and public space. 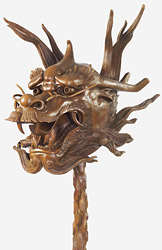 The Dragon is one of 12 sculptures in Ai Weiwei's "Circle of Animals/Zodiac Heads" that will go on view Aug. 1 on the Princeton campus. The zodiac sculptures will be displayed at Scudder Plaza in front of Robertson Hall, home of the Woodrow Wilson School of Public and International Affairs. (Photo by Tim Nighswander, © AW Asia)

The figures are rendered in detailed bronze, each approximately 10 feet in height. The dual title of the work addresses the notion that, even for those viewers who have no cultural connection to the Chinese zodiac, the sculptures stand as animal figures in their own right. It is significant that the sculptures will be placed alongside the Scudder Plaza reflecting pool, as the original Zodiacs were in front of the fountain of the imperial palace.

Presentation of "Circle of Animals/Zodiac Heads" reflects a longstanding commitment on the part of the  Wilson School to engagement with human rights issues around the world. "Ai Weiwei is the front line every day standing for human rights and free speech," said Anne Case, interim dean of the Wilson School. "We hope he is able to spend time on campus in the fall, to share with students his thoughts about free expression."

The installation is part of the Princeton University Art Museum's commitment to placing art across the University campus and creating opportunities to discover great art in the path of everyday life.

"We are delighted to have Ai Weiwei's work on campus for the coming year, work that is at once playful and provocative, and through which we can consider the role of the visual arts in the politics of resistance," said James Steward, director of the art museum.