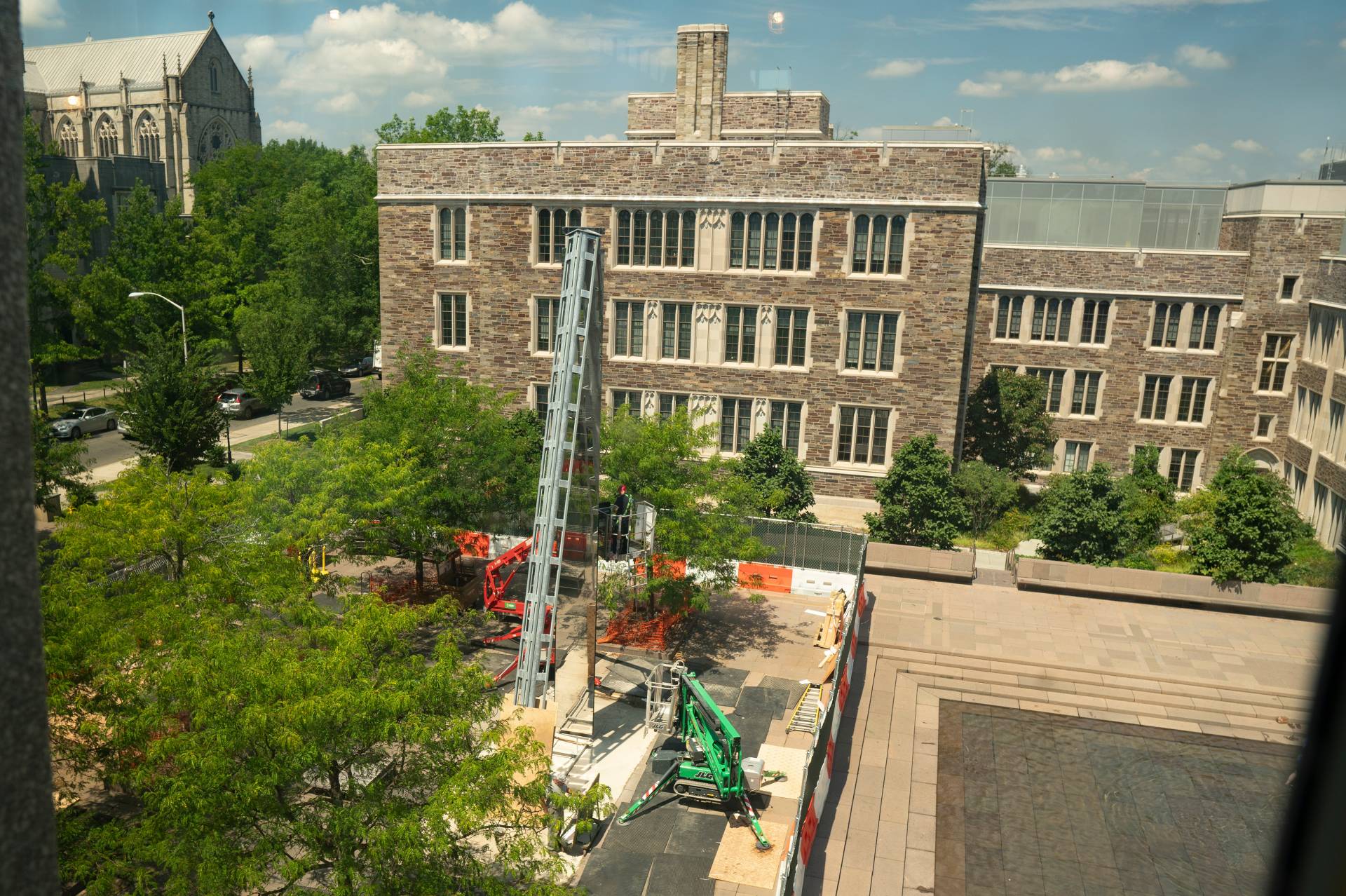 The University will mark the completion of the installation of "Double Sights" with a public discussion and dedication on Saturday, Oct. 5.

Construction of “Double Sights,” an installation about the complex legacy of Woodrow Wilson, is nearing completion on Scudder Plaza adjacent to Robertson Hall, home of the Woodrow Wilson School of Public and International Affairs. The University will mark the installation’s completion with a public discussion and dedication on Saturday, Oct. 5.

A public dedication featuring remarks by President Christopher L. Eisgruber will follow at 4:45 p.m. on Scudder Plaza. The afternoon will conclude with a reception in the Bernstein Gallery of Robertson Hall, where an exhibition examining Wilson’s contested legacy, “In the Nation’s Service? Woodrow Wilson Revisited,” is on display.

The talk and dedication events coincide with the conference “Thrive: Empowering and Celebrating Princeton’s Black Alumni,” which will welcome alumni and their guests to campus Oct. 3-5.

In 2015, a University trustee committee was established to make recommendations about how the University should mark the legacy of Wilson, the University’s 13th president, New Jersey’s 34th governor and the 28th president of the United States. One of the recommendations of the the Wilson Legacy Review Committee was that a “permanent marker” be installed at the Woodrow Wilson School that “educates the campus community and others about the positive and negative dimensions of Wilson’s legacy.”

In April 2016, the University’s Board of Trustee adopted the recommendation. A committee was formed, chaired by Woodrow Wilson School Dean Cecilia Rouse and University Architect Ron McCoy and made up of faculty, staff and students. After a competition in which six firms presented options, the committee selected Hood’s project for its honest reflections on the complexities of Wilson’s legacy and its creative approach.

Measuring 39 feet in height, “Double Sights” is adjacent to the “Fountain of Freedom” on the Washington Road side of the plaza. It is a vertical sculpture of two columnar elements, one leaning on the other, wrapped with surfaces of black and white stone-like glass and etched with quotations representing both the positive and negative aspects of Wilson’s legacy.

Quotes by Wilson on the outside of both try to capture Wilson’s views on a variety of issues, said Hood, who is creative director of the Hood Design Studio and professor of landscape architecture at the University of California, Berkeley.  At the sculpture’s center, the two vertical planes face each other; one is a glass lenticular surface with images of Wilson’s contemporaries who were critical of his views, particularly about race and gender. The other side contains quotes by these detractors regarding negative actions taken by Wilson.

“Powerful words force us not to choose sides but to try to understand,” Hood said during an April 4 talk on campus. “We are trying to create a design in which you might visit the installation 20 times and find something different each time you visit.”

Over two years, Hood convened focus groups of students, faculty, staff and alumni as well as members from the Campus Iconography Committee to inform his thinking about the didactic content and imagery that adorn the sculpture.

“In the Nation’s Service? Woodrow Wilson Revisited,” which debuted in 2016, is again on display in conjunction with the completion of “Double Sights.” The exhibition is also available online.

The exhibition draws on modern scholarship, newly digitized resources and Princeton’s special collections to paint a more complete picture of Wilson than is often presented, highlighting the ways in which he failed a great number of Americans. Through correspondence, writings, photographs, newspapers and other documents that place Wilson in historical context, visitors will gain a fuller understanding of his complexities and why he continues to evoke both admiration and opprobrium nearly a century after his death.