The exhibit "In the Nation's Service? Woodrow Wilson Revisited" has moved to the Frist Campus Center, the first in a series of campus stops that will allow more Princeton University students, faculty, staff and community members to see the work.

"In the Nation's Service?" documents not only the positive but also the negative aspects of Wilson's tenure as 13th president of Princeton and 28th president of the United States. The exhibit opened in the Bernstein Gallery of Robertson Hall in April. 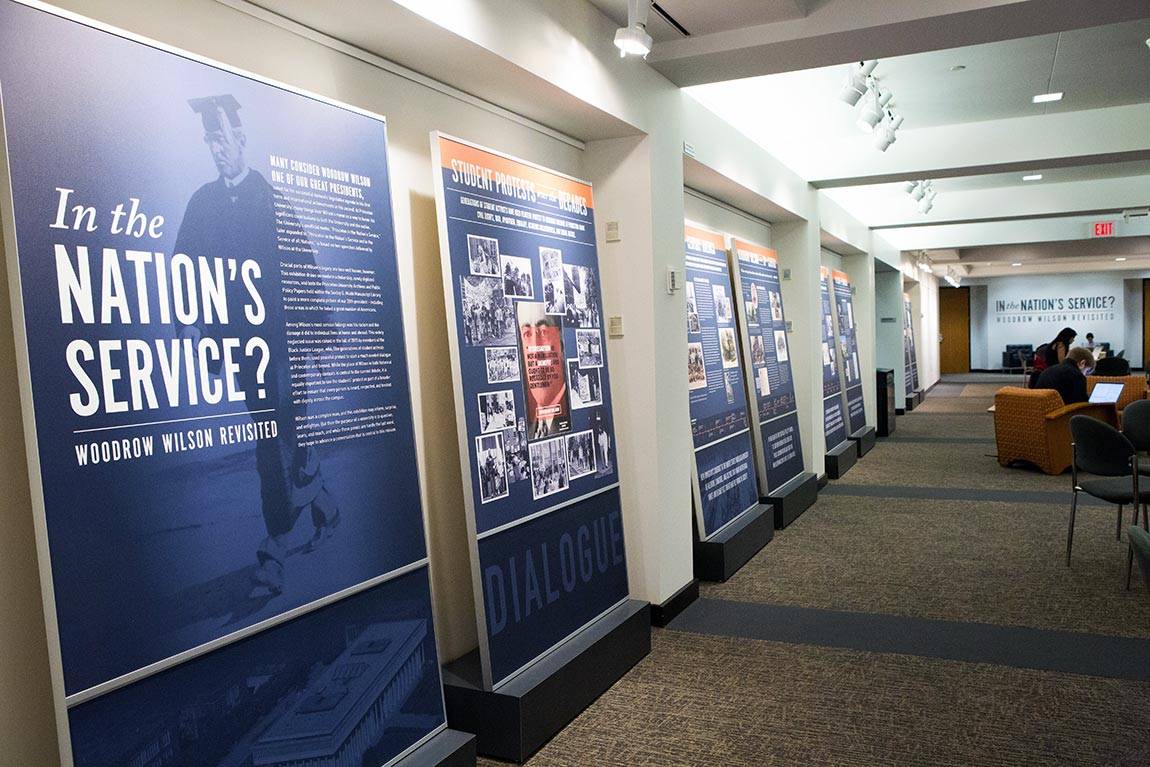 The exhibit "In the Nation's Service? Woodrow Wilson Revisited" will be on display on the 200 level of Frist Campus Center through Nov. 30. It opened in the Bernstein Gallery of Robertson Hall (above) in April. (Photo by Denise Applewhite, Office of Communications)

"This exhibit aims to provide essential background as part of an ongoing dialogue about Woodrow Wilson," said Cecilia Rouse, dean of the Woodrow Wilson School of Public and International Affairs, the Lawrence and Shirley Katzman and Lewis and Anna Ernst Professor in the Economics of Education, and professor of economics and public affairs. "As we still grapple with questions related to Wilson's legacy, it is important for the community to know the facts. Sharing the exhibition across campus allows us to continue this critical discourse."

The exhibit will be on display on the 200 level of Frist through Nov. 30. Over the 2016-17 academic year, it will also be installed temporarily in Chancellor Green (Dec. 5-30) and at 701 Carnegie Center (Jan. 9-Feb. 3). Other stops across campus are being planned.

The exhibit draws on modern scholarship, newly digitized resources and Princeton's special collections to paint a more complete picture of Wilson than is often presented, highlighting the ways in which he failed a great number of Americans. Through correspondence, writings, photographs, newspapers and other documents that place Wilson in historical context, visitors gain a fuller understanding of his complexities and why he continues to evoke both admiration and opprobrium nearly a century after his death.

The exhibit also encourages participation through the use of the #RevisitWilson hashtag on social media. The exhibition is also available online.

"This exhibit depicts, in great detail, Woodrow Wilson's contentious legacy," said Daniel Linke, University archivist and curator of Public Policy Papers. "The goal was to create a dialogue, but it doesn't end here. As the exhibit moves throughout campus, a dialogue about Wilson — and his thorny story — can continue. We need such a space at Princeton."

The exhibit is sponsored by Princeton University and was created by the University's Seeley G. Mudd Manuscript Library, a division of the Department of Rare Books and Special Collections, and the Woodrow Wilson School.