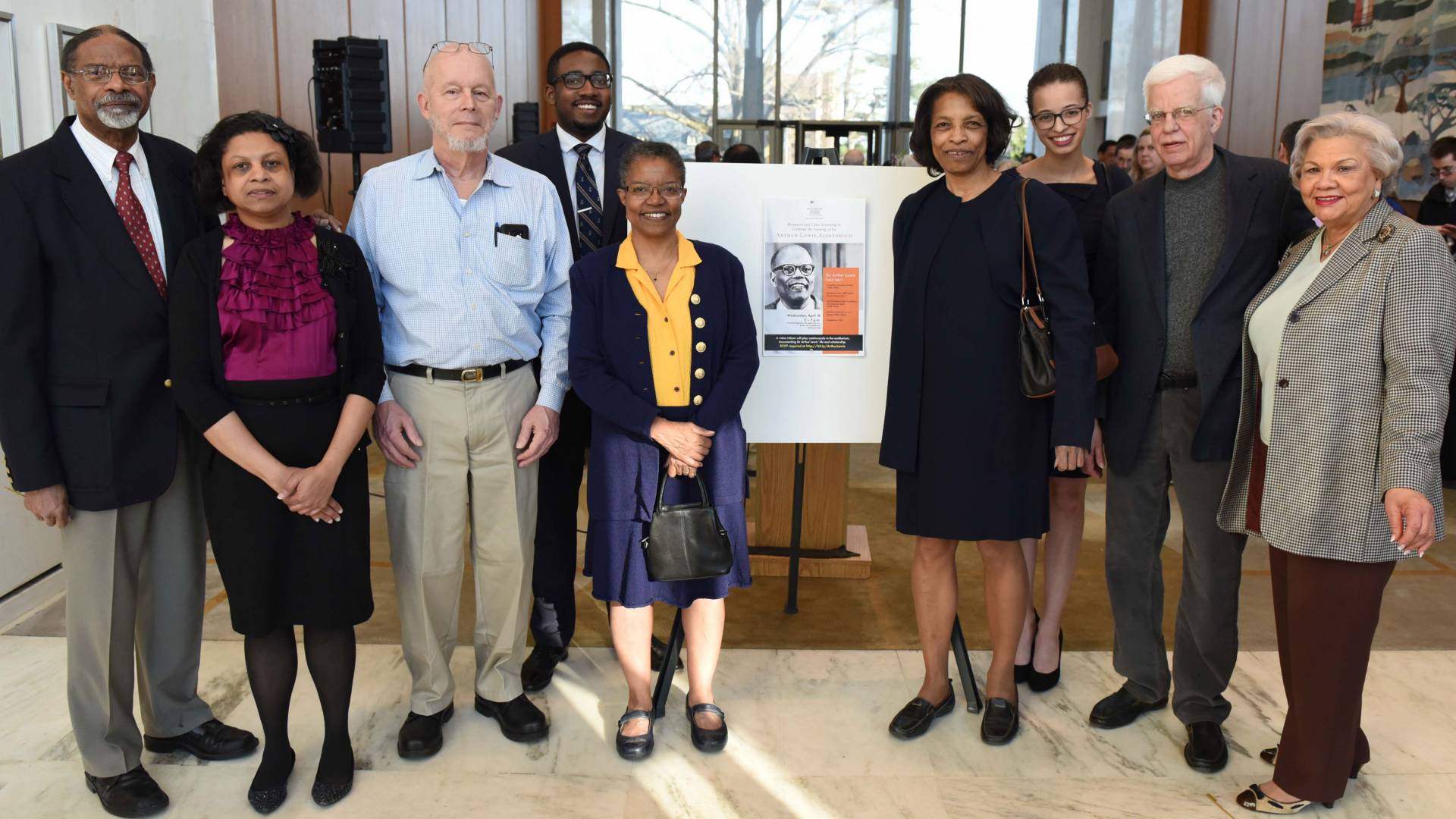 Extended members of Sir W. Arthur Lewis’ family attend the reception April 18 in Robertson Hall at Princeton to commemorate his legacy and the renaming of the building’s main auditorium in his honor. Lewis served on Princeton’s faculty from 1963 to 1983 and was the University’s first black full professor. He received the 1979 Nobel Prize in economic sciences and remained associated with the University in emeritus status until his death in 1991.

A reception and video tribute April 18 in Robertson Hall at Princeton University commemorated the legacy of economist Sir W. Arthur Lewis and the renaming of the building’s main auditorium in his honor.

Sir W. Arthur Lewis (1915-1991) served on Princeton’s faculty from 1963 to 1983 and was the University’s first black full professor. Lewis received the 1979 Nobel Prize in economic sciences and remained associated with the University in emeritus status until his death in 1991. He remains the only black individual to receive a Nobel Prize in the science subjects.

Previously, the space in Robertson Hall, which is home to the Woodrow Wilson School of Public and International Affairs, was named for University President Emeritus Harold Dodds, whose name now graces the building’s atrium. 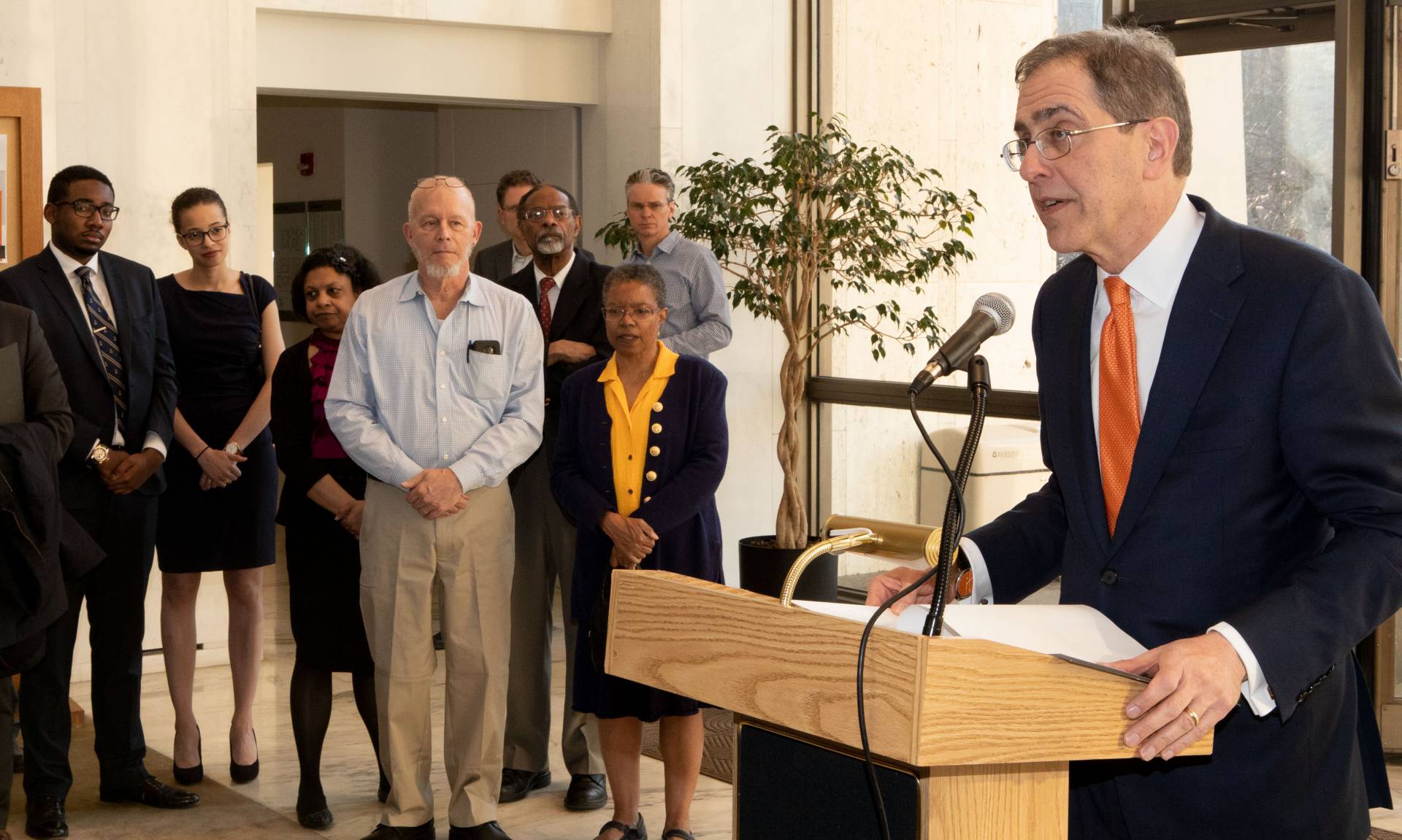 Princeton President Christopher L. Eisgruber gives remarks commending Lewis’ accomplishments and service. He noted how the dedication supports the University’s goal of illuminating its history more fully and reflecting the vibrant diversity of our society.

Welcoming guests and speaking about Lewis’ impact, Princeton President Christopher L. Eisgruber said, “As a Nobel Prize-winning authority on economic growth and one of the founders of development economics, Sir Arthur Lewis is an inspiring choice to grace the most prominent lecture hall in the Woodrow Wilson School.”

Eisgruber noted how the renaming of the space aligns with the University’s ongoing priority to recognize and celebrate diversity. “Through the naming of Arthur Lewis Auditorium, we not only recognize an intellectual giant who contributed greatly to the world, but also take an important step to illuminate this University’s history more fully and to reflect the vibrant diversity of our society,” he said. “The work of building a truly inclusive environment requires the support and active engagement of all members of this community.” 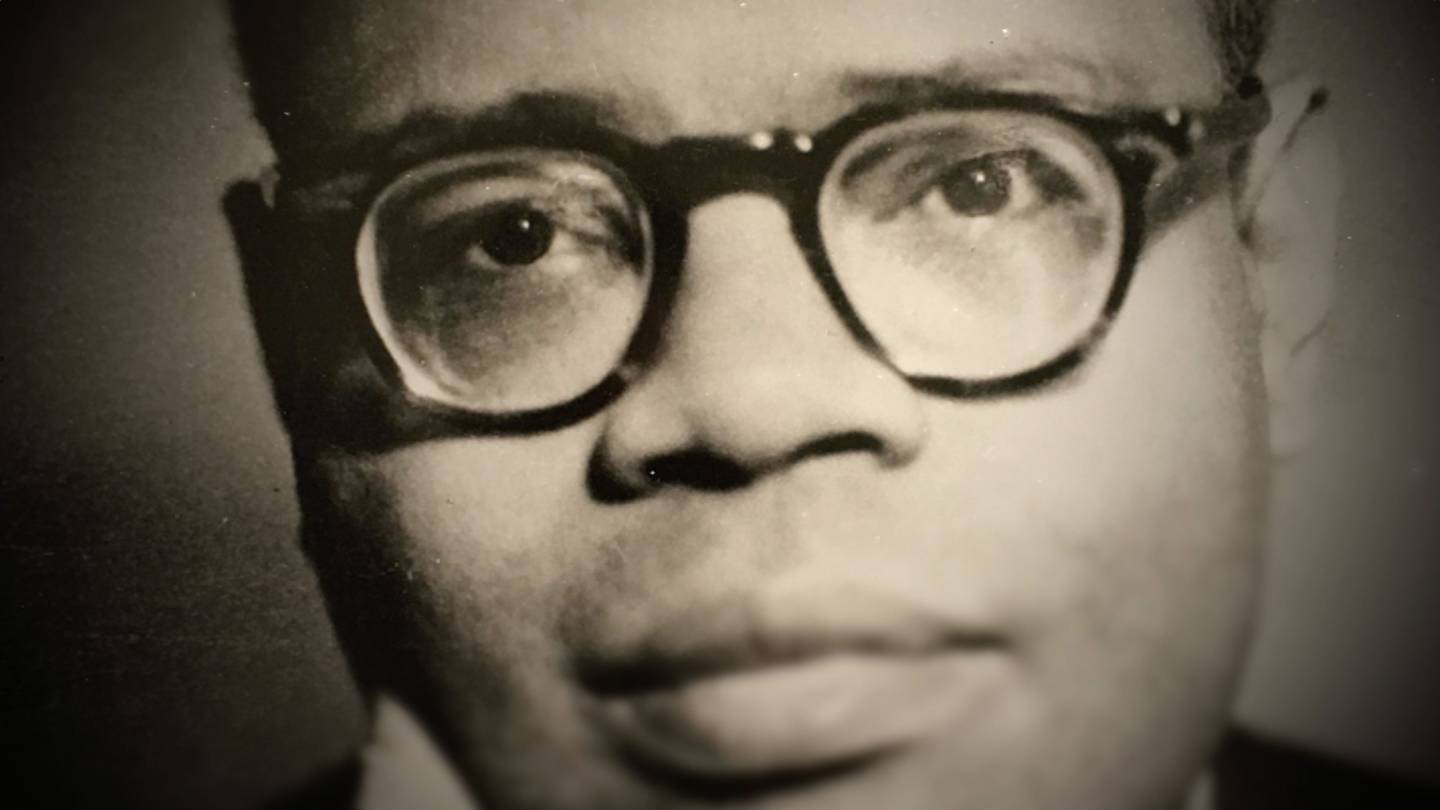 The video "Sir W. Arthur Lewis: A Lasting Legacy" commemorates the life and scholarship of the Princeton economist and Nobel laureate.

Lewis’ Nobel Prize recognized his pioneering research into economic development, with particular consideration of the problems of developing countries. Lewis was knighted in 1963.

Throughout the two-hour reception, a 10-minute video tribute documenting Lewis’ life and scholarship played on a continuous loop in the newly named auditorium. Interviewees in the video reflected on his humble background and notable achievements. 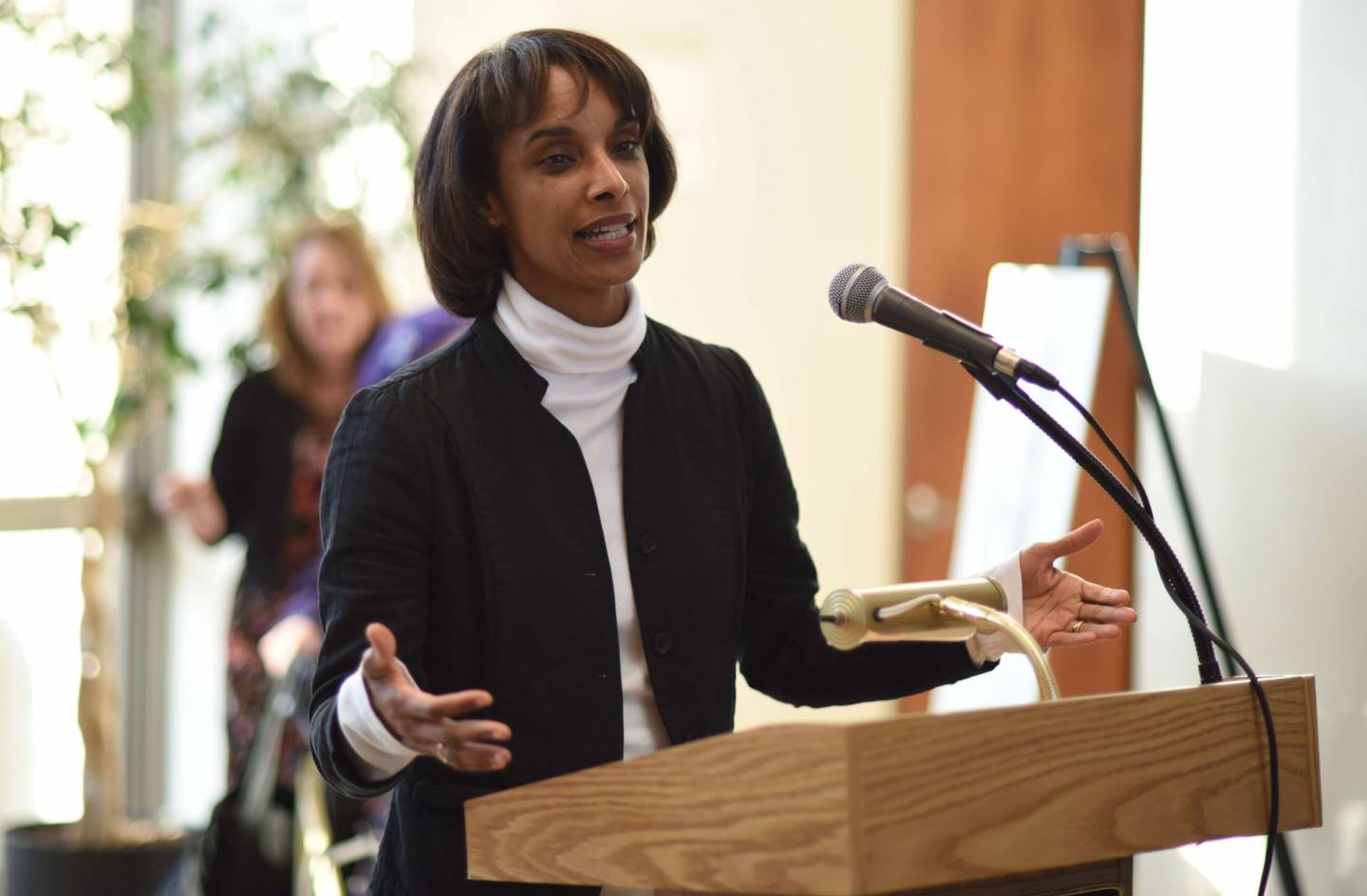 Cecilia Rouse, dean of the Woodrow Wilson School of Public and International Affairs, welcomes the 200-plus attendees to the reception in Robertson Hall.

Among those interviewed were Robert Tignor, biographer of Lewis and Princeton’s Rosengarten Professor of Modern and Contemporary History, Emeritus; Sir Angus Deaton, recipient of the 2015 Nobel Prize in economic sciences and Princeton’s Dwight D. Eisenhower Professor of International Affairs, Emeritus; and Cecilia Rouse, dean of the Woodrow Wilson School and the Lawrence and Shirley Katzman and Lewis and Anna Ernst Professor in the Economics of Education.

“Institutions of higher education need to reflect our society, and at the Woodrow Wilson School, there is really no more important place than the Sir Arthur Lewis Auditorium,” Rouse said in the video. “It’s a very important space within Robertson Hall. It was a very important gesture for us to rename it after somebody who was so foundational and so important and such a pathbreaker as was Sir Arthur Lewis.”

The event drew 200-plus individuals from the University and the local community. Several members of Lewis’ family, including his daughters Barbara Virgil and Elizabeth Channon and his granddaughter Samantha Virgil, attended.

The recommendation to name Robertson Hall’s auditorium for Lewis was made by the Council of the Princeton University Community Committee on Naming, which was established to advise the University’s trustees on the naming of “buildings or other spaces not already named for historical figures or donors to recognize individuals who would bring a more diverse presence to the campus.” The new name of the auditorium took effect July 1, 2017. 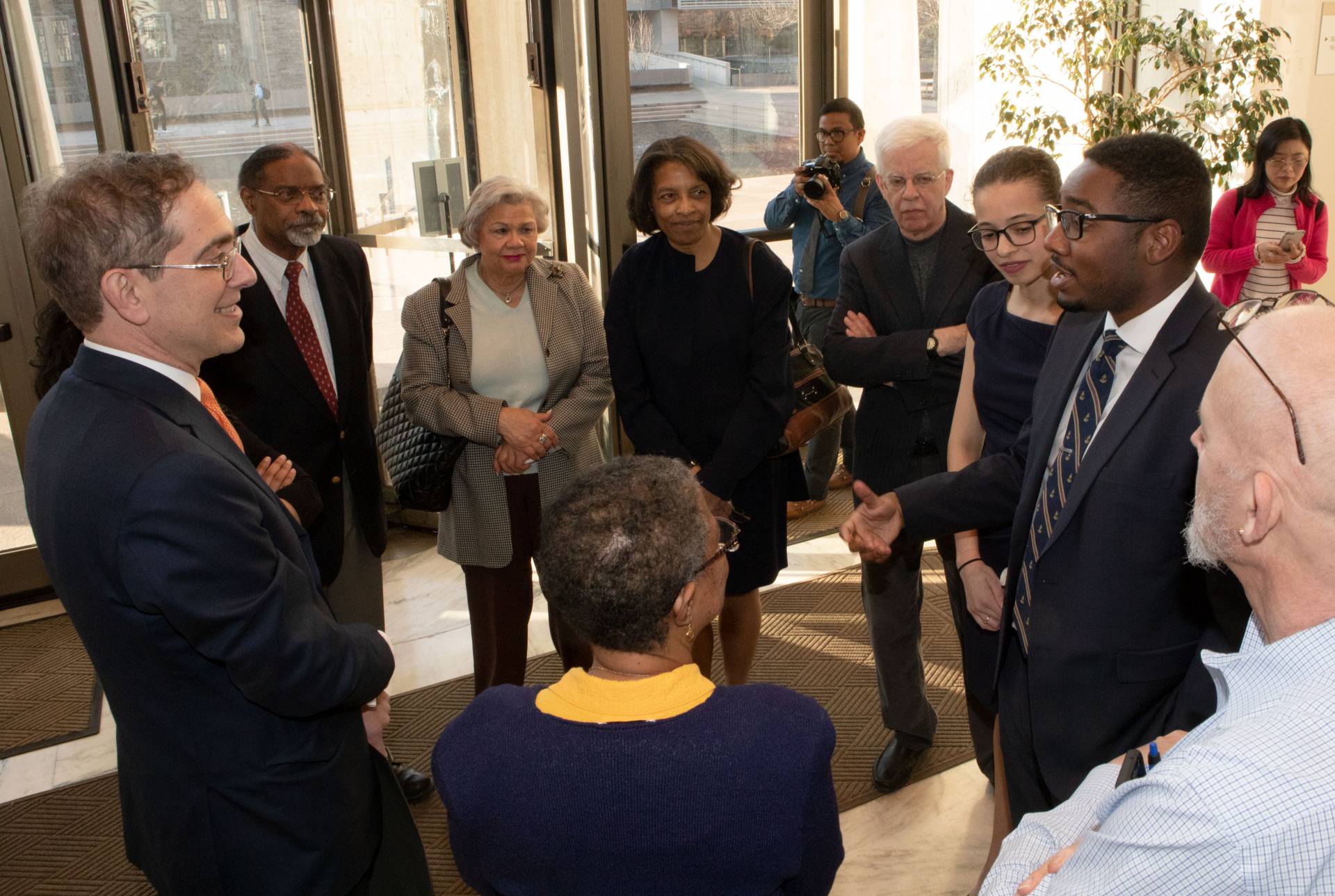