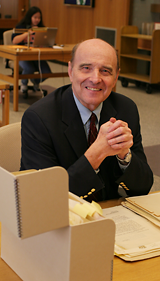 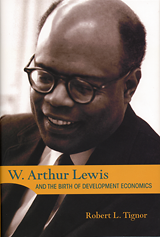 “W. Arthur Lewis and the Birth of Development Economics” was published by Princeton University Press in December 2005.

W. Arthur Lewis was a man who broke boundaries. An economist who focused on the developing world, Lewis was the first black full professor at Princeton when he arrived in 1963. Sixteen years later, he became the first person of African descent to win a Nobel Prize in a field other than literature or peace.

Robert Tignor, the Rosengarten Professor of Modern and Contemporary History at Princeton, was a colleague of Lewis’ and his friend. They worked together on the committee that established the Program in African Studies and often discussed the challenges facing the countries of Africa, a subject of study for both men. Tignor, who is retiring this spring after 46 years on the Princeton faculty, is a scholar of African history, Middle Eastern history and imperialism.

Inspired by the donation in 1993 of Lewis’ papers to the Seeley Mudd Manuscript Library, Tignor decided to write an intellectual biography of his friend. The book traces Lewis’ life from his birth on the Caribbean island of St. Lucia and closely examines Lewis’ groundbreaking work in the field of development economics, including his high-profile position in 1957 as the chief economic adviser to Ghana, then the first black African country to gain its independence from colonial rulers. Lewis retired from Princeton in 1983 and died in Barbados in 1991.

“W. Arthur Lewis and the Birth of Development Economics” was published in December by Princeton University Press. Tignor recently discussed Lewis’ life and work with the Princeton Weekly Bulletin.

You’ve never written a biography before. What inspired you to write about your former colleague and friend?

I’d never even thought about writing a biography. I’m an analytical social science historian, not a biographer, but I had encountered Lewis’ name many times in my research on the modern economic and political history of various parts of Africa. Lewis was involved in what was going on in a lot of those societies, not just because he was writing about them as an economist, but because he was often asked by the colonial office to advise them. When I learned his papers had been deposited in Mudd Library by his wife, Gladys, I thought, “Wow, I need to look into this.”

I started at Princeton in 1960, and he arrived in 1963. He was by then a great man — we all knew he was a tremendous scholar, a person highly regarded in government circles.

He was one of the founding members of our African Studies Committee, and he was very enthusiastic about it. He was religious in his attendance at our meetings. We would meet at somebody’s house, and he was almost always the first one there. He would be making these wry comments before the meeting started. He had a very wry sense of humor.

Lewis was born in 1915 on the island of St. Lucia. He left at age 18 when he won a scholarship to attend college at the London School of Economics. How did he end up pursuing an academic career?

He finished his undergraduate degree in 1937 with first-class honors, but he had a hard time finding a job because of racial discrimination. So the people at the London School of Economics asked him to study for a Ph.D. After he completed that, the director, A.H. Carr-Saunders, said, “Let’s see if we can’t hire this man.” They had never hired a black person before. They offered him the lowest possible position, as a temporary one-year assistant in the economics department, and they decided they wouldn’t let him do any one-on-one advising because people might object to that.

But he was enormously successful as a teacher — the students flocked to him — so they took that advising stipulation off the books right away. He made quite a reputation for himself as a promising young scholar, but he couldn’t become a professor there because the small number of professorships they had were occupied by young people. So he applied to the University of Liverpool — this was in 1946. The appointments committee unanimously recommended him, but when the recommendation went to the vice chancellor, he said, “We can’t do this. I don’t think we’re ready for a black professor.”

In the end he was offered an even better position at Manchester University, which was gung ho to appoint him, and he stayed there for about 10 years. He was the first black professor at a British university.

Did that kind of outright discrimination anger Lewis?

He never spoke about these things, but I know it was important to him that he became a pioneer for blacks in academia. He wanted a world in which race played no part, where people were judged entirely on their merits.

Some of your most intriguing findings about his work involve the position he held in 1957 as the chief economic adviser to Ghana just as it was gaining its independence. Lewis was giving sound economic advice to politicians who didn’t want to hear it, right?

Yes, the most interesting material in his papers were 15 letters he exchanged with Kwame Nkrumah, the leading African nationalist in the 1950s who became the prime minister of Ghana. They came to know one another when they were both in London in the ’40s, and the nationalists were distrustful of British economists, who were part of the colonial scene. So when they thought about their plans for economic development and industrialization, they asked Lewis to advise them.

Ghana’s economy seemed robust at the time because of high cocoa prices, but everybody knew the high prices weren’t going to last forever. Lewis was asked to draw up a five-year plan, and, of course, he asked the ministers to submit their requests. They wanted all these showy programs — an airport, an airline, a navy, ambassadorships all over the world — and Lewis said, “We can’t afford these things.” He wrote Nkrumah an impassioned letter that said, “If you keep insisting on personal baubles, we’re not going to be able to find clean water for your people to drink or cheap electricity. We’re not going to be able to build schools or create a good health care program.” And Nkrumah wrote back and said, “The advice you have given me, sound though it may be, is essentially from the economic point of view. And I have told you on many occasions that I cannot always follow this advice as I am a politician and must gamble on the future.” He was very frank.

So Lewis resigned, but he refused to go public with his reasons. He felt if he spelled out why the Ghanaian development plan was a mess, then other African countries would be delayed in gaining independence. In later years Lewis was often blamed for the woes of the Ghanaian economy — by 1966 Ghana was bankrupt and Nkrumah was overthrown by a military coup d’etat — but Lewis never defended himself. Lewis’ name was associated with Ghana’s development plan, but the truth is his advice wasn’t listened to. He kept that fact pretty well concealed for his entire lifetime.

After resigning from the Ghana position, Lewis went back to the West Indies and became vice chancellor of the University College of the West Indies. Why did he come to Princeton after that?

He was a dynamic force as the leader of the University College of the West Indies. The only thing that unified the English-speaking part of the West Indies was that university, and that was largely Lewis’ doing. He held it all together through the strength of his personality and his energy, but it cost him dearly. He had dizzy spells and high blood pressure, and the doctors told him, “This is not good for you. You’re under too much pressure; you’ve got to leave.” He went to four physicians, and they all came to the same conclusion.

So he accepted an offer from Princeton to become professor of political economy in 1963. Gardner Patterson, dean of the Woodrow Wilson School at that time, wrote a letter to Princeton’s president, Robert Goheen, in which he called the Lewis appointment “a tremendous coup. I can think of no single academic appointment which we might make which will be so widely talked about.” In the 1950s and ’60s one of the big subfields in the economics discipline was development economics, and Lewis was the dean of the field. He spent 20 years teaching at Princeton.

Lewis went on to win the Nobel Prize while he was here, in 1979. For what work was he awarded the prize?

The finest article he wrote, published in 1954, was titled, “Economic Development With Unlimited Supplies of Labor.” It laid out how he thought economic development could be generated in the Third World. He said the advantage the Third World had at that stage was unlimited supplies of labor in agricultural sectors. People saw that as a drawback — the huge populations of countries like India and Egypt — but he felt it could be an asset. You could take these workers and put them in new industries that you were hoping to establish. Those industries would produce cheap manufactured goods, and the engine of economic development would get started.

In many ways the economic successes of certain Asian economies, notably South Korea, Taiwan and Singapore, can be attributed to their use of relatively cheap industrial labor to make a place for themselves in the international economy. So although the Lewis formula did not work everywhere — and he would have been the first to admit that it would not work in every location — it did in fact produce some notable achievements.

After studying so much about Lewis — his correspondence, his papers, his personnel files — what impression of the man did you come away with?

Lewis was a man with a powerful personality and strong opinions. Not everyone agreed with him, and he didn’t tolerate fools lightly. Overall my research confirmed what I already knew about Lewis: He was a great friend and a remarkable human being.