Eating habits in China spur global shift in water use

A decade ago, a shockwave raced through the world's agricultural markets. China opened its borders to foreign-grown soy.

Ranchers in Argentina plowed under their pastureland and Brazilian farmers opened new acreage for planting. Almost overnight, the economies of those countries changed.

Why did this happen? And why does it make sense to grow food and ship it around the world rather than raise crops close to home?

A Princeton-led research team has found that one of the primary answers is water.

"Trade in food is, essentially, trade in water," said Ignacio Rodríguez-Iturbe, the James S. McDonnell Distinguished University Professor of Civil and Environmental Engineering. "The food trade is a trade of virtual water between countries that have the water and countries that don't." 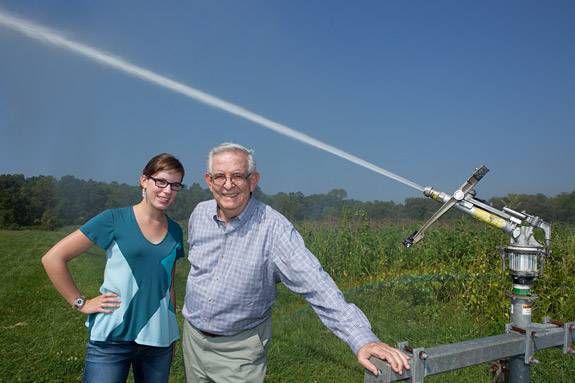 Carole Dalin (left), a Princeton graduate student in civil and environmental engineering, and Ignacio Rodríguez-Iturbe, the James S. McDonnell Distinguished University Professor of Civil and Environmental Engineering, are studying how the food trade is contingent upon the trade of "virtual water" between countries that have water and those that do not. (Photo by Denise Applewhite)

Roughly 80 percent of the world's fresh water use is devoted to agriculture. As countries such as China stretch their water supplies, they turn to countries with more abundant water supplies for food. In an article published on April 17 in the Proceeding of the National Academy of Sciences, the researchers reported that the volume of water associated with trade in food has doubled over the past 22 years.

"You see the impact of globalization on water usage," said Carole Dalin, a graduate student in civil and environmental engineering at the School of Engineering and Applied Science.

For the most part, the impact has been a relatively good one. In many parts of the world, water is a scarce resource, so the international trade allows regions with a surplus of water to devote that abundance to growing food that would be far more expensive and water-intensive to grow in drier regions. Even with the attendant transport costs, Dalin said, food trade has increased the efficiency of global water use in agriculture.

Changes in Asia, and China in particular, had the greatest impact overall, Dalin said.

"When we looked at the global network, we saw that Asia was the region that increased imports the most," she said. "Looking even closer, at the national scale, we saw that China became the biggest water importer in the world. They started importing in the 1990s and there is really a jump after 2000."

One of the main reasons for the shift was a change in people's diet in China, Dalin said. As the Chinese increased their consumption of meat, their demand for agricultural products changed. That led to a massive increase in demand for crops used to feed livestock, such as soy. The expansion of Chinese imports — including opening its markets to imported soy in 2001 — was large enough to shift economies around the world, primarily in Latin America. 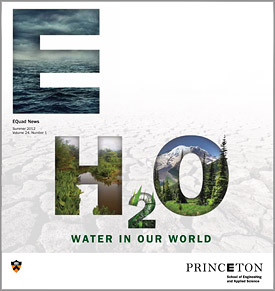 International trade in virtual water is one of numerous topics related to water that are explored in the most recent issue of EQuad News, the magazine of the School of Engineering and Applied Science. (Cover design by Matilda Luk)

Between 2001 and 2007, China's virtual water imports more than doubled, and 90 percent of that was due to imports of soy products, the researchers found. "This is driving agricultural expansion in South America, particularly in Brazil and Argentina," Dalin said.

Latin American farmers not only increased their production, but also increased their efficiency in water use over the period, which contributes to global water conservation. But the change is not without problems. The demand for exports has led to deforestation in South America as farmers seek to open new acreage to cultivation.

Still, the virtual water trade may offer a type of safety valve as the countries of the world use trade to make up for regional shortfalls in food production that are likely to occur as climate change increases the incidence of droughts.

"International trade, which is not typically driven by concerns about water, could be one method to adapt to climate change," Dalin said.

The group is now focusing on agricultural strategies to manage the virtual water trade within countries.

"Large countries like the U.S. and China could tailor their agricultural strategies and policies to take advantage of inter-regional trade within the country," Dalin said. If successful, she said the effort could allow countries "to make the most of their food production and water use in different areas."