by Office of Athletic Communications

For the first time in program history, the Princeton field hockey team won the NCAA Division I National Championship in a comeback 3-2 victory over No. 1-ranked North Carolina on Sunday in Norfolk, Va. In a battle between the top two teams in the nation, it took another resilient Princeton effort to best the six-time national champion Tar Heels.

"I'm so proud of the Tigers, they represent everything that's pure in intercollegiate athletics," Head Coach Kristen Holmes-Winn said. "They are incredible competitors on and off the field, and I'm so happy they have the opportunity to feel what it's like to be Number One." 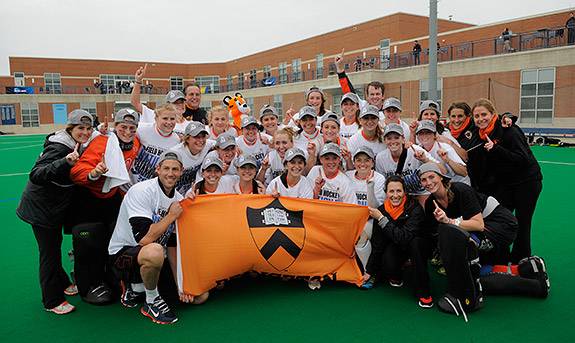 Members of the field hockey team pose for a photograph after defeating North Carolina 3-2 on Sunday, Nov. 18, to win the NCAA title. (Photo by Rick Voight)

The Tigers' road to the Final Four began with the NCAA Play-In Game versus No. 13 Lafayette, dominating and winning 6-0. They traveled to Charlottesville, Va., for the opening rounds of the tournament, dropping No. 15 Drexel 5-0 before putting together a come-from-behind, 5-2 win over No. 7 Virginia to advance to the semifinals.

Against two-time reigning national champion No. 6 Maryland, it took an overtime penalty stroke from freshman Teresa Benvenuti to send the Tigers to their third national championship game in program history with a 3-2 victory.

After falling by margins of 1-0 and 2-1 in the 12th and 47th minutes, respectively, sophomore striker Allison Evans was able to tap in the tying goal in the 57th minute.

Despite going 2-0 this season in overtime matches, Princeton tirelessly worked to push the ball into the Tar Heel circle before the end of regulation and earn its first advantage of the game. In a nearly identical play from the semifinals, junior Michelle Cesan was tackled to the right of goal and the Tigers were awarded a penalty stroke in the 60th minute. Junior Amanda Bird went to the chalk mark and sailed the ball in to put Princeton ahead.

"To beat North Carolina full-strength is a huge challenge, but to do it accessing the depth on the bench the way we did is a product of our team's hard work and preparation," Holmes-Winn said. "We approached this game the same way we approached Maryland. This was our moment, our chance, our opportunity, and we had to seize every chance we got."

For more details, a box score and a video, visit the Department of Athletics website.