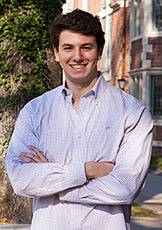 Princeton University senior Jake Nebel is among the 34 American college students who have been named 2013 Marshall Scholars.

The Marshall Scholarship covers the cost of graduate study and living at a British university of the recipient's choice for up to two years.

Nebel, a philosophy major from Winter Park, Fla., plans to pursue a master's degree in philosophy at the University of Oxford.

In his application for the scholarship, Nebel, who is also earning a certificate in values and public life at Princeton, wrote that he would like to extend his studies in ethics to areas such as political philosophy, epistemology and philosophy of law.

"Many see the life of the mind as detached from a life of action, but I study philosophy because it can change our actions for the better," Nebel wrote.

When he received news of the scholarship from the British Consulate-General in Atlanta over a congratulatory telephone call before the Thanksgiving holiday, Nebel said he "screamed in my room. I knocked on all my friends' doors but they were all in class. I called my girlfriend and both my parents at work but had to leave voicemail messages." Undeterred, he went straight to the office of Deirdre Moloney, director of fellowship advising in the Office of International Programs, and "gave her a hug and a high-five."

"I'm delighted that Jake has been awarded the Marshall," Singer said. "There are many academically gifted students at Princeton, but Jake is exceptional even here."

Singer said that Nebel caught his attention immediately as a freshman in his course "Practical Ethics."

"It was the first semester of the year, so Jake had been at Princeton only two or three weeks, and his grasp of philosophical issues was already remarkable," Singer said. "A couple of years later, Jake took one of my graduate seminars, and after reading his paper for the course, I told him to submit it to a journal. It has since been published in the Journal of Ethics and Social Philosophy."

"The thing I like best about Jake, though, is that he thinks hard about how to use his abilities to make the greatest positive impact on the world," Singer said. He noted that Nebel was the co-founder of the Princeton chapter — the second in the United States — of Giving What We Can, an Oxford-based community for effective philanthropy. In summer 2012, Nebel served as an intern with 80,000 Hours, a partner organization that gives advice on socially committed careers.

A member of Phi Beta Kappa, Nebel is the recipient of several awards and grants, including the James Madison Society for American Ideals and Institutions' Undergraduate Fellowship Award for summer 2012 and the Shapiro Prize for Academic Excellence in 2010 and 2011. He has participated as an undergraduate fellow in the Human Values Forum since he was a freshman.

Last year, he was appointed to serve on Princeton's Priorities Committee, which issues budgetary recommendations to the University president. A former resident of Forbes College, he continues to serve as a peer academic adviser, and this academic year he is a member of the philosophy department's Undergraduate Curriculum Committee.

A former participant in Lincoln-Douglas debate, a format for high school students to debate issues in ethics and public policy, Nebel has served as a coach for the Greenhill School in Dallas, and a curriculum director at the Victory Briefs Institute, a summer debating organization at the University of California-Los Angeles, during his time at Princeton. The Harvard University Debate Invitational has named its championship trophy in his honor, to be given annually to the first-place winner starting in 2014. At Oxford, Nebel plans to debate in the Oxford Union and hopes to compete internationally.

After Oxford, Nebel intends to pursue a Ph.D. and an academic career as a philosopher. "I hope to challenge students, colleagues and leaders outside philosophy to change their minds about important moral and political issues," he wrote in his application. "In short, I am an advocate above all for one cause: improving the world as effectively as possible."