by Neil Mills, Office of Communications 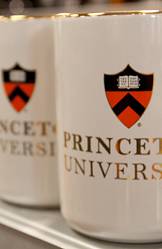 The Princeton shield, which is derived from the University's official seal, appears in many forms across campus, from mugs (above) to architectural details.

The Princeton shield, which is derived from the University's official seal, appears in many forms across campus, from mugs (above) to architectural details.

The Princeton University shield has a widespread presence throughout the campus. With a keen eye, one can catch a glimpse of this icon in campus architecture — from interiors to facades — and it also adorns sport venues, commercial items, publications and more. Whether small or large, sculptural, carved, or printed in ink, the University shield serves as an emblem of Princeton's rich traditions.

Play the "Finding the Enduring Shield of Princeton" video.

The symbol, as seen in this video, is derived from the University's official seal, which was adopted in its current version in 1896 when Princeton changed its name from the College of New Jersey to Princeton University. The seal, which serves as the University trustees' corporate signature on diplomas and other official documents, was described in the trustees' minutes of Feb. 13, 1896, as: "a shield resting upon a circle. In the upper part of the shield an open Bible with Latin characters VET NOV TESTAMENTUM signifying the Old and New Testaments. … In the lower part a chevron, denoting the rafters of a building." It also includes the Latin phrase "DEI SUB NUMINE VIGET" (Under God's Power She Flourishes), which is the University's official motto, and "seal of Princeton University" in Latin.

In the shield's formal application, it appears with the motto in a ribbon below the icon. In 2007, the shield was redesigned to be wider and rounder than the previous shield, and the black outline around the outside was removed to simplify and modernize its look.