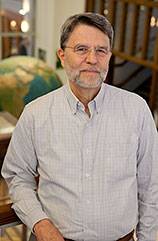 Whether it's the economics of clean energy, the politics of Washington or claims over the severity of the problem itself, the debate over climate change is loud and crowded. One aspect that often goes overlooked is the Southern Ocean ringing Antarctica at the bottom of the globe. But that, says Jorge Sarmiento, is about to change.

Play the "Unlocking the Mysteries of the Southern Ocean" video.

"In terms of bio-production in the ocean and the impact of climate change, it turns out the Southern Ocean is super critical," said Sarmiento, Princeton's George J. Magee Professor of Geoscience and Geological Engineering and an associated faculty member of the Princeton Environmental Institute (PEI). "It may hold many keys to more fully understanding the science behind all of this. I'd say it's a revolutionary time for this type of study."

Since joining Princeton's faculty in 1980, Sarmiento has studied the vital role Earth's oceans play in the complex biochemical process through which carbon is exchanged among water, soil and atmosphere.

"When I first got interested in the carbon cycle around 1984, I figured I'd spend a few years on it and move on to something else, because that's the way my career had been up to that point," he said. "But the more research I did, the more I found the Earth's carbon system to be a font of eternal stimulation. Every time I thought I had solved one problem, something new would pop up. My curiosity really couldn't be satisfied."

Sarmiento, who is also director of the University's Program in Atmospheric and Oceanic Sciences, has studied how the ocean absorbs and recycles carbon dioxide produced by deforestation and fossil fuels. His work has had implications for a range of concerns, such as the future sustainability of fisheries to improving predictive models that allow us to anticipate how nutrient cycles and biological life respond to climate change.

He has been involved with the Carbon Mitigation Initiative (CMI), a collaboration begun in 2000 between PEI and BP that brings together scientists, engineers and policy experts to design carbon mitigation strategies that are safe, effective and affordable.

"I think there's a real deep appreciation for the value of the scientific backbone behind understanding these things and the way that understanding can lead to finding and advocating for solutions," Sarmiento said. "That's a real strength of CMI."

The group focused in part on the Southern Ocean, and its role in the Earth's carbon cycle cannot be overstated, according to Sarmiento.

For one thing, Southern Ocean winds and buoyancy fluxes — which determine the density of ocean surfaces — are the principal source of energy for driving the critical large-scale, deep overturning circulation that occurs throughout the ocean. Vertical exchanges in the Southern Ocean are responsible for supplying nutrients that fertilize three-quarters of the biological production in the global ocean north of 30°S.

"About 75 percent of biological production north of 30°S is due to this up-flow of nutrients," said Sarmiento. "That's really exceptional."

In other words, most of the organic matter filtered through the global ocean would be lost forever if the Southern Ocean wasn't pumping it back up north. Without this force, Sarmiento says the Earth's oceans would essentially die in 30 years.

The Southern Ocean also absorbs about 60 percent of the Earth's anthropogenic (or man-made) heat and 50 percent of anthropogenic carbon — even though the body of water only occupies about a quarter of the planet's surface ocean area. This so-called biological pump helps to transfer carbon from the surface to the deep, thus mitigating climate change.

"The Earth isn't as warm as it should be because a large amount of heat caused by greenhouse gases is trapped in the ocean," Sarmiento said. "And a great deal of that trapping process takes place in the Southern Ocean."

The Southern Ocean is the least observed and least understood region of the world's oceans. According to Sarmiento, out of the 615,734 nitrate profiles available globally (which measure nutrient levels in the ocean), only 3,647 are for south of 30°S. Moreover, just 560 of these profiles are for south of 45°S. This leaves vast swaths of the Southern Ocean that have never been studied. To close the gap, Sarmiento has been working to obtain funding from the National Science Foundation that would allow him to drop dozens of robotic floats throughout the Southern Ocean to study it more closely.

About 3,500 of these autonomous floats are positioned around the world, and every 10 days they surface from a depth of one mile to measure conductivity and temperature. Sarmiento's floats would go one step further and be outfitted with sensors to measure nitrate, oxygen and pH. Sarmiento would be able to study multidimensional profiles of the ocean once impossible to obtain. He won't know until March if funding is approved, but the possibility of conducting these types of studies excites him.

"We have a chance to obtain vast amounts of data, more than any other time in history," he said. "It's extraordinary. A revolution is taking place."

Second-year postdoctoral research associate Thomas Frölicher has been working with Sarmiento on the relationship between climate change and the Southern Ocean. He says the professor's work will inevitably have a far-reaching impact on the study of climate change.

"Jorge's research leads us to a better understanding of Southern Ocean biogeochemical processes, which helps pin down one of the greatest sources of uncertainties in predicting the fate of anthropogenic carbon and the climate as a whole," said Frölicher. "He combines scientific curiosity, creativity and willingness to pursue ideas that at first seem difficult to solve, but yield extraordinary results in the long run."

It's a sentiment echoed by many of Sarmiento's colleagues, including Daniel Sigman, a co-investigator on the Southern Ocean project and the Dusenbury Professor of Geological and Geophysical Sciences.

"Jorge insists on clear, uncluttered logic, in both his research and his instruction," said Sigman. "More than any other researcher I know, Jorge pursues the Socratic method; Jorge will often introduce an idea that he thinks is particularly interesting and then use others' responses to fashion a map of its possible significance. In his interactions with his research group, gentle but pointed questioning is followed up with calculations, model simulations and investigations of data. This simple interactive approach has yielded transformative insights into ocean processes and has trained generations of high-impact researchers to identify the weak links in accepted ideas."

"It was just such an incredibly positive experience I had in that course," said Shoenfelt. "Professor Sarmiento was incredibly encouraging, and made sure the problem sets were appropriately challenging. The need to be creative and synthesize information developed our problem-solving skills, but the solution was very attainable and augmented our understanding of the lecture material. He always makes time to answer our questions and help develop our understanding as we work through problem sets, and is always very kind and encouraging."

In the complex and nuanced world of climate change, Sarmiento isn't interested in the politics, the economics or even the specific design of possible solutions. Rather, he's intent on continuing scientific study that could ultimately provide solutions.

"I see myself as being part of the truth squad," said Sarmiento. "What I and my research team do is provide truthful information that enables people to make decisions about mitigation based on a real scientific understanding of the systems at play. It's nice to be able to say you want to save the world, but it also comes down to an innate curiosity for me. That's what drives me forward every day, and I'm beyond fortunate that I get to do that here at Princeton."