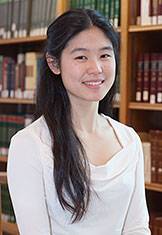 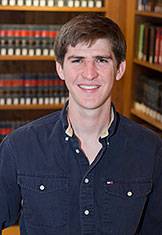 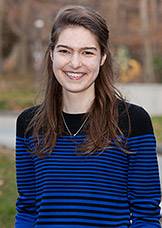 Princeton University seniors Erica Cao and Kaitlin Stouffer, as well as Class of 2012 graduate David Kurz, have been awarded Gates Cambridge Scholarships. The awards give outstanding students from outside the United Kingdom the opportunity to pursue postgraduate study at the University of Cambridge.

The recipients are among 39 U.S. winners of the Gates Cambridge Scholarships. International winners will be announced this spring. A total of 90 scholarships are typically awarded each year.

Cao, who is from Chesterfield, Mo., is majoring in psychology and pursuing a certificate in musical performance. At Cambridge, she will study for a master's degree in music studies, specializing in music and science. She eventually plans to attend medical school.

A piano player, Cao said the scholarship will allow her to study the intersections between music, psychology and clinical science at Cambridge's Centre for Music and Science.

"Her decision to study music and medicine in concert, if you will, will let her combine two of her passions and her social commitments. I have no doubt that her work in Cambridge will influence her career as a doctor," said Jill Dolan, the Annan Professor in English and professor of English and theater in the Lewis Center for the Arts.

Cao is involved in a number of activities that combine her interests in music and community service, including: co-founding the student group Music in Mind; leading the civic action spring break trip "Music, Mind and Medicine" sponsored by the Pace Center for Civic Engagement, where students worked with Boston community groups and hospitals to promote music as a way to improve lives; serving on the board of the nonprofit group Music is Medicine; and playing the piano at local nursing homes.

This past summer, Cao interned at the Boston-based organization Genuine Voices teaching troubled youth to write songs for children in hospitals.

In addition, she serves on the Mathey College Council, is a student adviser for Princeton University Concerts and is a member of the Triple 8 East Asian dance company.

Kurz graduated from Princeton in 2012 with an A.B. degree in ecology and evolutionary biology and a certificate in Spanish language and culture. He lives in the town of Princeton and is a ministry intern at Christian Union.

Kurz will pursue a master's in biological science in Cambridge's Department of Zoology. He eventually hopes to have a career helping to protect endangered fauna through work at an academic, zoological or nonprofit institution.

During his undergraduate studies at Princeton, Kurz took part in a number of scientific field projects in Maine, North Carolina, Panama and Costa Rica. His senior thesis research in Costa Rica focused on the ways reptiles and amphibians respond to agriculture-based land use change. He also is a member of the Sigma Xi Scientific Honor Society.

"David is an exceptionally gifted conservation ecologist with a very sharp mind, a keen interest in natural history, and an abiding love of tropical forests and the creatures within them," said Kurz's thesis adviser David Wilcove, professor of ecology and evolutionary biology and public affairs.

Outside the classroom, Kurz was treasurer of Princeton Faith and Action, a tour guide for Orange Key and an Outdoor Action trip leader. He also co-organized a charity race for the Bald Head Island Conservancy in North Carolina and spent a semester abroad at the Universitat Autònoma de Barcelona in Spain.

Stouffer, of Potomac, Md., is a computer science major. She will pursue a master's in medical genetics at Cambridge. She hopes also to earn a medical degree and a Ph.D. in computer science, eventually becoming a physician-scientist.

Stouffer was recently awarded a Daniel M. Sachs Class of 1960 Graduating Scholarship from Princeton. She plans to pursue her Sachs Global Scholarship in South Africa after she completes her master's program at Cambridge.

"Katie completed a project in my lab as part of her junior independent work in computer science, and I was deeply impressed by her ability to rapidly assimilate complex new ideas, and to put those ideas to work in an organized, productive way," said Matthew Botvinick, associate professor of psychology and the Princeton Neuroscience Institute.

Stouffer is a member of the Phi Beta Kappa Honor Society, the Tau Beta Pi Honor Society and received the Shapiro Prize for Academic Excellence for her freshman and sophomore years.

She spent a semester studying abroad at the University of Oxford and has conducted research at the Princeton Neuroscience Institute and the Nelson Biological Laboratories at Rutgers University.

She also has held internships at Google and Microsoft, and was awarded the Accenture Prize in Computer Science.

Outside the classroom, Stouffer served as co-president of the student organization Princeton Women in Computer Science, has tutored middle and high school students in computer science, and was artistic director of the student tap dance group TapCats.