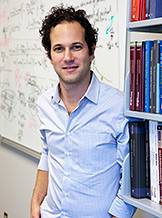 Greg Kaplan (above), an assistant professor of economics at Princeton, worked withSam Schulhofer-Wohl, a senior economist at the Federal Reserve Bank of Minneapolis, on research that suggests new reasons for the decline in migration between states.

American workers — long unusually mobile — are increasingly staying put. There are a range of popular explanations for the slowdown in migration between states, including an aging population that is firmly entrenched and a rise in the number of two-income couples that find it difficult to pull off a dual job switch. But researchers from Princeton University and the Federal Reserve Bank of Minneapolis have other ideas.

Greg Kaplan, an assistant professor of economics at Princeton, and Sam Schulhofer-Wohl, a senior economist at the Federal Reserve Bank of Minneapolis, argue that the shifts in migration patterns are better explained by changes in the labor market and the ways people learn about faraway places. Those factors account for at least one-third — and perhaps all — of the decline in migration, they say.

Kaplan and Schulhofer-Wohl discuss their findings, which are described in a recent working paper:

"Compared with their counterparts in most other countries, American workers have long been unusually mobile, freely migrating around the country to wherever they can find good jobs. Many researchers view that high level of mobility as an important strength for the U.S labor market: Migration allows the economy to respond flexibly to local shocks, such as the recent oil boom in North Dakota, and suggests that workers will go wherever they are most productive.

"But the rate of migration among states has been falling steadily for decades and is now about half what it was in the early 1990s. Is the labor market losing its flexibility? And will the U.S. economy suffer as a result?

"In new research, we investigate the decline in long-distance labor mobility in the United States. We show that the data rule out many popular theories — an older population with deep roots, for example, or an increase in the number of two-earner couples who won't move unless both earners find jobs — that are linked to decreasing labor flexibility. In fact, the interstate migration rate would have fallen almost exactly as much over the past two decades if American workers' demographics had not changed at all. In place of those theories, we offer two new explanations for the decline in U.S. migration.

"Our first explanation is that fewer workers need to move to obtain the best jobs, because labor markets around the country have become more similar. We show that the mix of available jobs differs less from state to state than it did 20 years ago, and the income a worker can earn in a particular occupation depends less than before on what state she works in. That decrease in geographic specificity makes it easier for workers to stay where they most enjoy living, and continue working in their preferred occupation.

"Our second explanation for low interstate migration is that workers have better information than before about what it's like to live in different parts of the country. "Suppose you think you might want to escape Minnesota winters and move to California for the year-round sunshine. Unless you have already spent some time in California, or have talked with many people who live there, you can't be very sure you will like it — and there's a good chance you will either miss the snow and return to Minnesota or try a third state quite soon. (Data show that someone who moves between states in one year has about a 15 percent chance of moving again the next year.)

"But in recent decades, improved information technology and decreased market regulation have made it much easier to learn about faraway places, without actually moving there. Airline deregulation made it cheaper to take a vacation in a place you might want to live, while telephone deregulation and the Internet help people gather information about distant states. With more information, workers are less likely to make moves they ultimately regret, and the migration rate declines.

"In our research, we use a quantitative model to measure how powerful these explanations are. We find that reduced geographic specificity of occupations explains one-third of the drop in interstate migration over the past two decades. Our estimates of the effect of increased information are less precise, but it potentially explains all of the remaining drop.

"In other words, American workers haven't lost their flexibility. They just don't need to move so much anymore."