As public health officials sound the alarm about the global spread of drug-resistant bacteria, researchers are working to develop more effective antibiotics to counter this dangerous trend. Now, results from a team including a Princeton University scientist offer a possible solution that uses the bacteria's own byproducts to destroy them.

In a recent paper in the journal Nature Biotechnology, first author Mark Brynildsen, a Princeton assistant professor of chemical and biological engineering, reported that scientists can force bacteria to increase their production of a class of molecules called reactive oxygen species, which can either kill the bacteria outright or make them far more vulnerable to antibiotics. Bacteria normally produce reactive oxygen species during growth. Small amounts don't hurt them because of certain protective enzymes within the bacteria, but too much of the substances can lead to  "oxidative stress." The researchers decided this weakness could be exploited.

"The question was, could we leverage this natural byproduct of growth?" Brynildsen said. 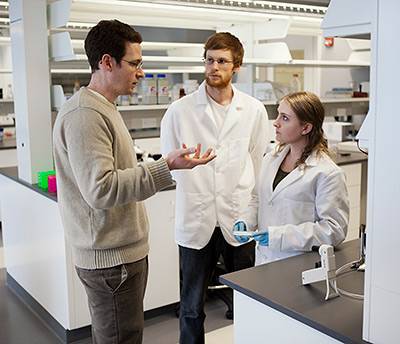 Mark Brynildsen (left), an assistant professor of chemical and biological engineering at Princeton, is part of a research team working to find ways to avoid antibiotic resistance. Here, he meets with Ph.D. students Jonathan Robinson and Kirstin Adolfsen. (Photo by Denise Applewhite)

Scientists don't fully understand the mechanism by which bacteria produce reactive oxygen species. Yet, Brynildsen and fellow members of the research team led by Professor James Collins at Boston University understood enough about the production in general to construct a number of feasible computer models. Essentially, the team analyzed reactive-oxygen production from thousands of mathematical models and looked for trends. That analysis revealed that certain enzymes allowed bacteria to reduce the levels of reactive oxygen species they created.

"This was what we were looking for, enzymes that when removed increased reactive-oxygen production independent of the uncertainty in the modeling," Brynildsen explained.

The team analyzed a relatively benign strain of the E. coli bacteria, a common microbe whose variations can cause serious illness in humans. Using their computer model, the team predicted which bacterial genes are likely involved in regulating reactive oxygen species production. They then tested their predictions by deleting those genes in bacteria and confirming that the bacteria experienced increased production of reactive oxygen and an increased sensitivity to oxidants. The researchers then treated these bacteria with antibiotics and found that the organisms were in fact more vulnerable.

In some tests, the researchers added carboxin, a chemical compound often used as a fungicide, which mimicked the effects of altering one of the genes. They confirmed that the chemical amplified the killing effect of a common antibiotic, ampicillin. Brynildsen said that the research confirmed that although carboxin itself may not be suitable as a drug, chemicals with similar effects could be used in conjunction with antibiotics to increase the effectiveness of drug treatments against E. coli infections. Brynildsen and fellow researchers at Princeton plan to pursue similar research with other bacteria.

One of the possible benefits of increasing reactive-oxygen species concentrations is to allow current antibiotics to become more effective at lower dosages. In battling disease resistance, scientists try to deliver antibiotics in sufficient concentrations to kill bacteria without harming the patient. Problems arise when the maximum dose of an antibiotic that is safe for a person is too low to kill all the bacteria, allowing resistant organisms to survive. Epidemiologists call this gap the "mutant selection window."