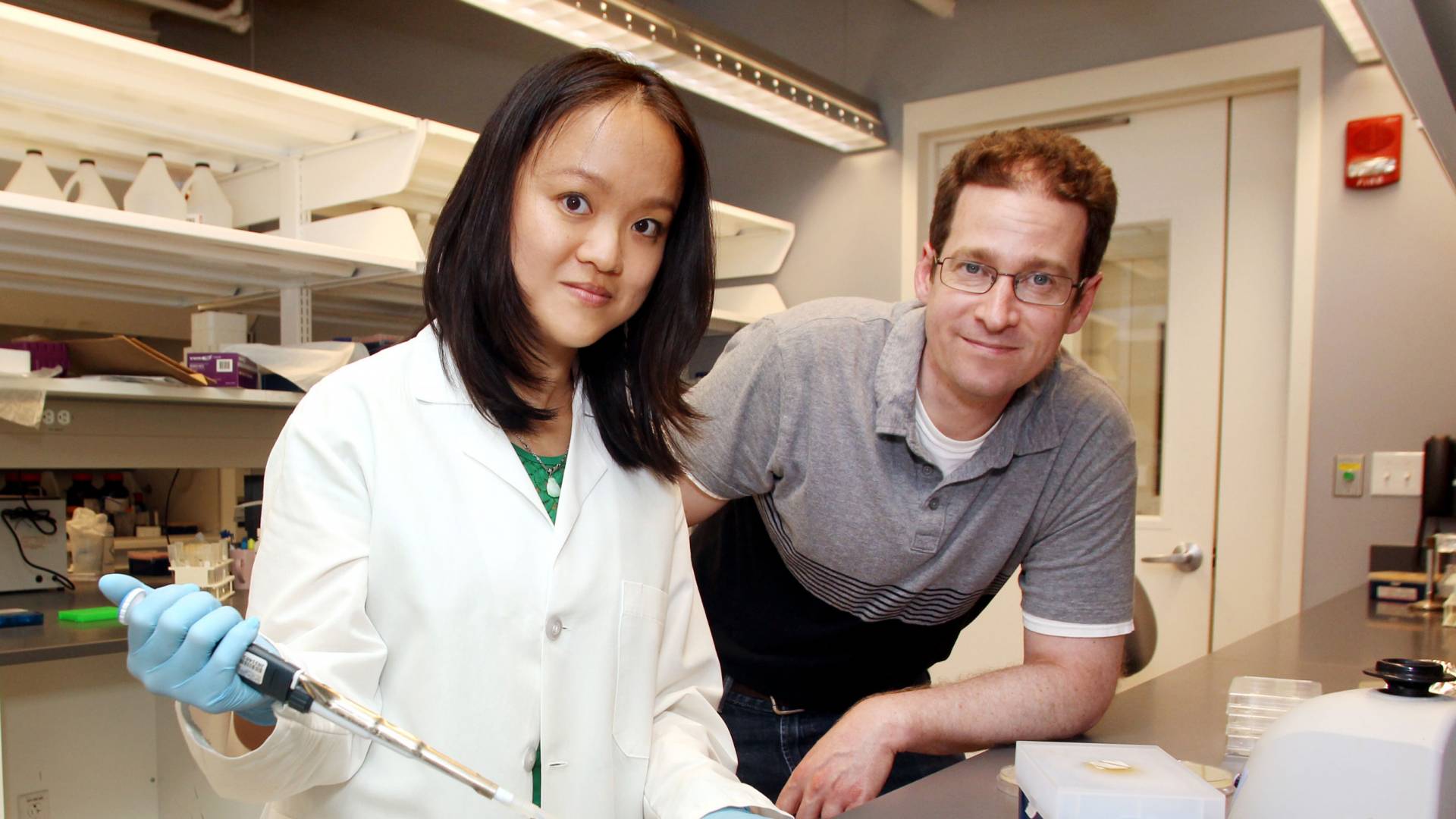 Wendy Mok, a postdoctoral researcher, and Mark Brynildsen, an associate professor of chemical and biological engineering, determined that bacteria that repaired DNA damaged by antibiotics before resuming growth had a much better chance of surviving treatment.

For bacteria facing a dose of antibiotics, timing might be the key to evading destruction. In a series of experiments, Princeton researchers found that cells that repaired DNA damaged by antibiotics before resuming growth had a much better chance of surviving treatment.

When antibiotics hit a population of bacteria, often a small fraction of “persister” cells survive to pose a threat of recurrent infection. Unlike bacteria with genetic resistance to antibiotics, evidence suggests that persisters stay alive in part by stalling cellular processes targeted by the drugs.

In a new study, Princeton researchers examined a class of antibiotics that target bacterial DNA. In bacterial populations, some cells repair damaged DNA before resuming growth, and others resume growth before making repairs. The researchers found that those that make repairs before resuming growth generally are the ones that survive as persisters. The research advances a long-term goal to make antibiotic treatment more effective.

In results published June 18 in the Proceedings of the National Academy of Sciences, Wendy Mok, a postdoctoral researcher, and Mark Brynildsen, an associate professor of chemical and biological engineering, analyzed the responses of E. coli bacteria to treatment with ofloxacin, an antibiotic that causes DNA damage by blocking enzymes needed for DNA replication and RNA transcription. Their work built on previous results from Brynildsen’s lab, which revealed that persisters to ofloxacin required DNA repair machinery to survive.

“But that doesn’t guarantee that they’re necessarily going to survive,” said Mok. “We hypothesized that the timing of DNA repair and the resumption of growth-related activities like DNA synthesis could impact the survival of persisters after treatment.”

To test this hypothesis, Mok and Brynildsen used a strain of E. coli bacteria that had been genetically engineered to allow researchers to control the cells’ growth. The researchers used the bacteria to create a uniform population of cells with stalled growth that could tolerate the ofloxacin antibiotic.

By controlling the activity of a key DNA repair protein, RecA, the researchers tested the effect of further delaying DNA repair until after the resumption of DNA synthesis. This led to a sevenfold decrease in survival compared to cells that continuously produced RecA, demonstrating that persistence to ofloxacin depends on repairing DNA damage before synthesizing the new DNA necessary for growth.

Mok and Brynildsen then examined persistence in normal cells placed in a low-nutrient environment to stall their growth, simulating a condition that bacteria frequently encounter within an infected host. Indeed, following ofloxacin treatment, if cells were starved of carbon sources for at least three hours, they observed nearly complete tolerance to the antibiotic. This tolerance depended on effective DNA repair processes. They also observed enhanced persistence toward ofloxacin with nutrient deprivation after treatment among cells growing in biofilms, which are groups of bacteria that stick to surfaces and are implicated in a majority of hospital-treated bacterial infections.

Jan Michiels, a professor of microbiology at the University of Leuven-VIB in Belgium, said the study used “an elegant model system” to probe the underlying mechanisms of persistence. Michiels, who was not involved in the research, said it represents “a landmark discovery providing new fundamental insights into how persister cells avoid death.”

Ofloxacin and other similar antibiotics are included on the World Health Organization’s Model List of Essential Medicines, a catalog of the most important drugs for meeting health care needs. Curbing bacterial persistence could be a promising route to making these therapies more effective against urinary tract infections, staph infections and other bacterial diseases.

“Nutrient starvation is a stress that bacteria can routinely encounter at an infection site,” said Mok. “Our results suggest that in the period after antibiotic treatment we can consider looking at targeting some of these DNA repair processes, and see whether that can improve treatment outcome.” One counterintuitive approach might be to speed up bacterial growth following antibiotic treatment, thereby dooming the cells to outpace their repair mechanisms and die. However, the researchers added that other approaches would likely be better than fostering the growth of a pathogen in a patient.

Brynildsen’s group and others are interested in finding potential drug compounds that may interfere with bacterial DNA repair, as well as examining the relationship between antibiotic tolerance and genetic resistance.

Support for this research was provided in part by the Army Research Office, the Charles H. Revson Foundation and Princeton University startup funds.