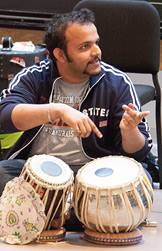 In the new course "The Improvising Ensemble," taught by Anthony Branker, students with performance experience across a range of genres from jazz to classical to world music are exploring improvisational techniques. Above, junior Ashutosh Thakur improvises on the tabla.

Branker developed the idea for the course after observing a class at the Estonian Academy of Music and Theatre, in which students trained in jazz and classical music experimented with collaborative techniques, synthesizing their musical backgrounds.

Does music have to have rhythm? Are leaves rustling in the breeze music? How might a spoken word poem inspire a composer? The 20 Princeton students in the new course "The Improvising Ensemble" are discovering answers to these kinds of questions as well as pushing the boundaries of their own concepts of what music is and can be.

The improv students all have significant performance experience, and all are involved in the music department or student ensembles — but the common denominators stop there. Just three are members of the University jazz program; the others are trained in classical, pop, blues or world music, where improvisation may still be utilized, but is not as central to the process of music-making as it is in jazz. Seven are vocalists; 13 are instrumentalists who play one or more instruments including the violin, double bass, flute, clarinet, alto sax, piano, electric guitar, tabla and percussion.

"The thing I like about this course is that the students are all sharing their musical worlds with each other, so they're being exposed to things that maybe they've heard before but not really understood," said Branker, who is a member of Princeton's Class of 1980.

The idea for the class grew out of a course Branker observed in 2007 at the Estonian Academy of Music and Theatre in Tallinn, in which students trained in either classical or jazz music worked together in improvisational ensembles. Branker replicated this approach in a study he conducted with two small jazz ensembles at Princeton as part of his doctoral research at Columbia University Teachers College.

One technique Branker has used in the course is gestures. "The conductor may curve his forefinger toward particular members of the group, and that means, 'I want you to play staccato and random notes,'" Branker said. "This approach to music-making really frees the thinking of the musicians, because now they are being forced outside of their comfort zone; they aren't creating in ways that are aligned with their traditional genre such as classical music."

Ashutosh Thakur of Tucson, Ariz., is a junior majoring in economics and pursuing University certificates in applied and computational mathematics and finance, and a departmental certificate in political economy. He has been studying the tabla (Indian drums) for 13 years in Mumbai, India, and in workshops in California for 10 years.

He said he has benefited as a musician by working with students from so many musical disciplines. "It's almost like a salon; we play, we perform, we discuss, we critique and we share our opinions. It is an experimental think tank from which we each draw new musical ideas and creative inspiration," Thakur said. 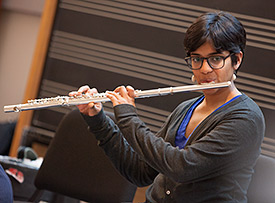 Freshman Neeta Patel, who is classically trained on the flute, said: "This class has broadened my definition of music."

To set a benchmark at the beginning of the course, Branker asked the students to read an essay by American composer John Cage titled "The Future of Music Credo," then write their own credo about what they think music is.

"I wanted them to create their own set of beliefs," Branker said. At the end of the course, Branker wants students to see how their initial "definition" of music may have changed.

For another assignment, the students took a 30-minute walk and submitted a journal entry about what they had heard. Neeta Patel, a freshman from Blackwood, N.J., compared the sounds she heard on her walk to "an unfolding symphony." A classically trained flautist, Patel said the course has fundamentally altered her views on what music is.

"This class has broadened my definition of music simply by exposing me to genres of music-making that I normally wouldn't interact with, given my very classical background. It has helped me channel my creative energy through my flute," Patel said. 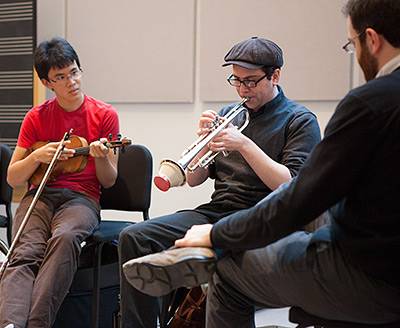 Junior Wenley Tong (left), a violinist, listens to trumpeter Eli Asher (center), a member of the Class of 2000, who visited the class with members of his Manhattan-based ensemble Respect Sextet, including tenor saxophonist Josh Rutner (right).

One week, Branker showed slides of artwork spanning Impressionist paintings to avant-garde photography, and then had small groups of students create music in response to each.

"I was amazed how natural the music-making process was," said junior Amali Gunawardana, a vocalist from Holmdel, N.J., and a psychology major who is taking the class as part of her certificate in jazz studies. "Not one word was spoken beforehand, and yet we were still able to produce a meaningful and sophisticated piece of music, that much richer for its spontaneity."

She said that as an instructor Branker never settles. "He is able to balance encouragement and toughness in a way that has really facilitated my growth as a musician. He pushes his students to a place of music and scholarship they have never been before, and we are that much stronger for it," Gunawardana said.

Branker invited two professional ensembles to work with the class. The Free Tallinn Trio, whom Branker had met in Estonia, came in March. In April, the Manhattan-based Respect Sextet visited. The group's trumpeter, Eli Asher, a member of the Class 2000, studied with Branker as an undergraduate.

On a Thursday afternoon in McAlpin Rehearsal Hall, Asher introduced "destructive duets," an improvisation game in which two musicians take turns playing, "interrupting" each other with music of contrasting styles and intensity. "It's as if they're in dialogue," Asher told the class. He demonstrated with his sextet's pianist, Red Wierenga, and then the students tried it as one large ensemble. 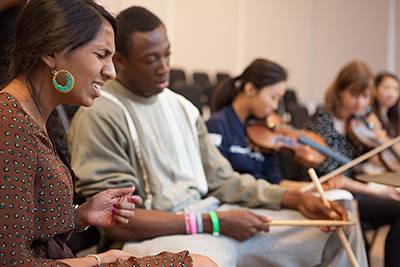 Junior Amali Gunawardana (left), a vocalist who is taking the class as part of her certificate in jazz studies, said, "I was amazed how natural the music-making process was." Seated next to her is senior Austin Hollimon, a percussionist.

After a moment of silence, one student began the "composition" with deep, low smoky-jazz-club pizzicato notes plucked on the double bass. A surf rock riff on the electric guitar washed in. The haunting notes of the clarinet were seamlessly erased by the sax, spitting out staccato strains. A 1960s-style folk song on acoustic guitar was extinguished by the moody Continental voice of the violin. Then, a vocalist's "da-day-da-day-oh" aria faded into the upbeat twang of the Appalachian fiddle. The trumpet emitted a burst like a squeaky rubber eraser, quaffed by a 1940s big band ostinato on sax. The electric guitar emulated the crackle of radio static, only to be ushered into a poignant coda by a whispered andante on piano.

After a round of applause, Asher told them: "It's a good exercise that pushes you to do something you wouldn't normally do. It's a little uncomfortable but we're responding to a situation and opening up possibilities. That's where real creativity comes in."

Returning to Princeton as a professional musician, Asher said he found the students to be "what I expected and more: a room full of passionate, energetic and articulate musicians, the kind I remember meeting and making music with during my undergraduate days."

Branker has enjoyed watching the group develop as a community. "I hope the course will give the students a whole different way of looking at art, at life, at each other, at the world," he said. 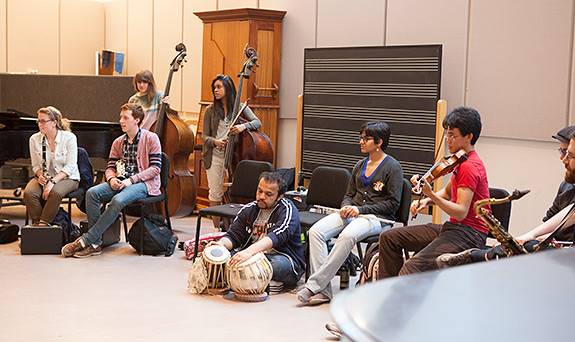 In one classroom exercise, students created an improvised composition by taking turns playing one at a time, with the next player interrupting the previous player with music of contrasting style or intensity.