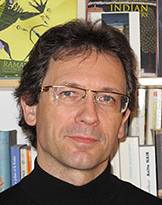 Photos courtesy of the Center for International Teaching and Research

International leaders in the fields of South Asian politics and physics will visit Princeton for terms starting this academic year in the University's Global Scholars Program.

The program, overseen by the Council for International Teaching and Research, brings some of the world's top scholars to Princeton to teach, conduct research, participate in workshops and give public presentations. A key goal of the program is to build ties between Princeton and other leading academic institutions around the world for opportunities such as research collaboration and faculty and student exchanges.

Jaffrelot is a prominent international scholar specializing in South Asian politics. The author of eight books, his research focuses on theories of nationalism and democracy; mobilization of lower castes and untouchables in India; the Hindu nationalist movement; and ethnic conflicts in Pakistan. He is research director at the Centre National de la Recherche Scientifique (CNRS) and chairs the Asia Group at the French Ministry of Foreign Affairs. From 2000-08, Jaffrelot served as director of the Centre d'Etudes et de Recherches Internationales (CERI). He has been on the faculty at King's College London and Sciences Po in Paris, among other teaching positions. At Princeton, Jaffrelot will co-teach courses, organize a conference that will bring scholars from Europe and India to campus, and conduct interdisciplinary workshops. His strong links to European and Indian academic institutions will benefit the Program in South Asian Studies and help build research and exchange opportunities.

Regnault, a researcher at the Centre National de la Recherche Scientifique (CNRS) and a scholar at the École Normale Supérieure (ENS), is known for his work in quantum and condensed matter physics. In 2010, he was awarded the bronze medal from CNRS in recognition of his research in quantum mechanics. The author of numerous highly cited papers, Regnault's teaching spans graduate and undergraduate courses, including teaching at Princeton's Summer School for Condensed Matter Physics. As a Global Scholar, he will support students and postdoctoral researchers through a combination of courses and individual mentoring. He also will continue to collaborate with faculty in the departments of physics and electrical engineering and forge closer ties between ENS and Princeton.