Narrow stripes of dirt and rock beneath massive Antarctic glaciers create friction zones that slow the flow of ice toward the sea, researchers at Princeton University and the British Antarctic Survey have found. Understanding how these high-friction regions form and subside could help researchers understand how the flow of these glaciers responds to a warming climate.

Just as no-slip strips on flooring prevent people from slipping on a wet floor, these ribs or "tiger stripes" — named in reference to Princeton's tiger mascot — provide friction that hinders the glaciers from slipping along the underlying bed of rock and sediment, the researchers report online in the journal Science.

Researchers at Princeton University and the British Antarctic Survey used mathematical modeling and data from satellites and ground-penetrating radar to infer the existence of stripes or ribs (in red) indicating areas of high friction between the glacier and the underlying bedrock. These high-friction ribs slow the movement of ice toward the sea. The image on the left is the Pine Island Glacier and the image on the right is the Thwaites Glacier, both in West Antarctica. (Image courtesy of Olga Sergienko, Program in Atmospheric and Oceanic Sciences)

The researchers discovered these tiger stripes, which occur in large, slippery regions under the glaciers, using mathematical modeling based on data from the National Snow and Ice Data Center and the British Antarctic Survey. The work was conducted by Olga Sergienko, an associate research scientist in Princeton's Program in Atmospheric and Oceanic Sciences, and Richard Hindmarsh, a scientist at the British Antarctic Survey. 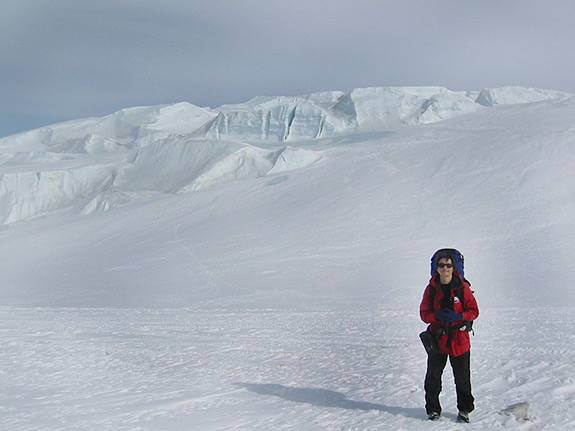 Olga Sergienko, an associate research scientist in the Program in Atmospheric and Oceanic Sciences, shown during a research expedition to the McMurdo Ice Shelf in Antarctica in winter 2006. (Photo courtesy of Olga Sergienko)

Researchers would like to understand what factors determine the flow of glaciers, which are massive, moving ice sheets that, when they flow into the ocean, can contribute substantially to sea-level rise. The researchers studied two glaciers, the Pine Island Glacier and the Thwaites Glacier in West Antarctica, which together contribute about 10 percent of the observed sea-level rise over the past 20 years, despite their small areas. The Pine Island Glacier moves at a velocity of about 1.5 miles per year, according to the researchers. 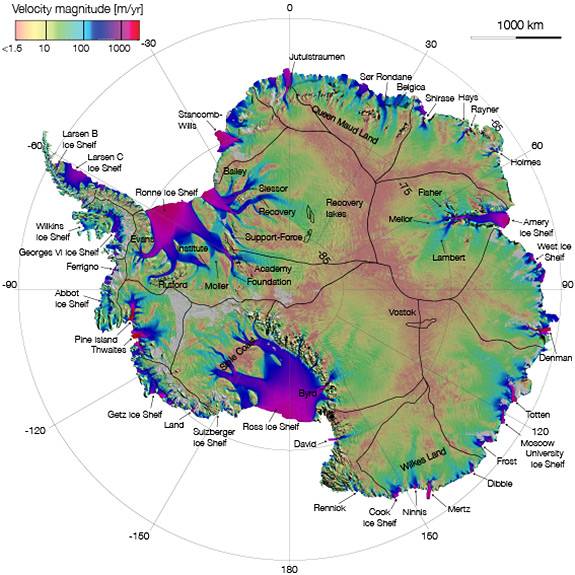 This map shows the Pine Island and Thwaites Glaciers, at far left, in West Antarctica. (Image courtesy of NASA)

Studying the bottom of these glaciers is next to impossible due to the inability to see through the ice, which is over a mile-and-a-half thick. Instead, the researchers used satellite measurements of the ice velocity and ground-penetrating radar collected from airplane flyovers to detect bedrock and surface topography, as well as field observations. Using the data, Sergienko created a mathematical model that calculated what happens inside the glacier as it flows along the bedrock. The model predicted the formation of the tiger stripes or ribs, which Hindmarsh had theorized some years earlier.

The tiger stripes, which the researchers also call ribs due to their slightly curved structure, lie at roughly 30-degree angles to the direction of the glacier's movement. These ribs arise and decay in response to natural processes over roughly 50 to 100 years, according to the researchers' calculations. The process is strongly affected by how water, which comes from ice melting due to the inherent heat trapped in the Earth, infiltrates the space between the ice sheet and the bedrock, the researchers found.

"The ribs may play an important role in buffering the effects of a warming climate, since they slow the movement of ice that reaches the ocean and contributes to sea-level rise," said Sergienko. "These changes can happen independently of climate change, too," she added.

More investigations are needed to verify models of rib formation, according to the researchers. "Our guess is that these ribs are related to typical landforms that exist in the formerly glaciated areas of North America and Europe," said Hindmarsh. "A great example are the drumlins — raised areas of soil and rock — that make the hills in Seattle or Glasgow," he said.

The study reveals new patterns of friction that help control the speed of ice flow and determine the effect of Antarctic ice on sea level, according to Douglas MacAyeal, a professor of glaciology at the University of Chicago who was not involved in the work. "This is strongly suggestive of a new style of physical controls over friction, like water flow in the thin zone between the rock of the bed and the ice," he said. "The results of this study will drive new theoretical and observational efforts to understand what causes this pattern."

The study, "Regular patterns in frictional resistance of ice-stream beds seen by surface data inversion," was published online in the journal Science on Nov. 7. The research was supported by National Science Foundation grant CMG-0934534 and the British Antarctic Survey Polar Science for Planet Earth program.