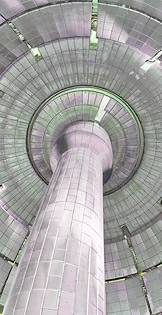 "Star Power," a new informational video about the Princeton Plasma Physics Laboratory, explains the lab's research, such as its studies of the physical properties of plasma using the National Spherical Torus Experiment device above.

"Star Power," a new informational video about the Princeton Plasma Physics Laboratory, explains the lab's research, such as its studies of the physical properties of plasma using the National Spherical Torus Experiment device above.

The Princeton Plasma Physics Laboratory (PPPL) has released "Star Power," a new informational video that uses dramatic images and thought-provoking interviews to highlight the importance of the laboratory's research into magnetic fusion.

Through original music, graphics, live footage and photographs, the video explains fusion, its potential as an abundant renewable energy source and the lab's efforts to harness that energy for widespread use. The video features 19 PPPL members, including Stewart Prager, director of the lab and a Princeton University professor of astrophysical sciences, and a host of additional scientists, engineers and technicians. It also includes individuals outside the lab speaking about fusion, from U.S. President Barack Obama to the actors on the television sitcom "The Big Bang Theory."

The 10-minute movie will be shown to the thousands of visitors on PPPL tours and the laboratory's website.

"We wanted to create a new, up-to-date video that shows the public the great work we are doing here at the lab in a friendly, clear and compelling way," said Deputy Director for Operations Adam Cohen. "This video will be a powerful tool for conveying the essence of our efforts."

The movie was directed by Kevin Coughlin, a videographer and an award-winning journalist. Kitta MacPherson, PPPL's director of communications, conceived of the video as a dramatic introduction to the laboratory's cutting-edge research. She noted that all the interviews were unscripted.

"This speaks volumes about the intellect and passion of PPPL's staff," she said. "This may be one of the few places where a filmmaker could ask challenging questions and receive eloquent and fascinating answers extemporaneously from so many."

The Princeton Plasma Physics Laboratory, funded by the U.S. Department of Energy's Office of Science and managed by Princeton University, is located on Princeton University's Forrestal Campus in Plainsboro, N.J. PPPL researchers collaborate with scientists around the globe in the field of plasma science, the study of ultra-hot, charged gases, to develop practical solutions for the creation of magnetic fusion energy as an energy source for the world.