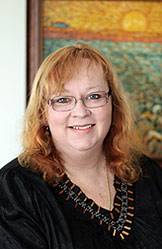 MacPherson joined PPPL after three years with Princeton University's Office of Communications, where she served in the positions of senior writer and science writer/coordinator. Her new appointment was effective Feb. 1.

"We are delighted that Kitta is joining us so we can continue to tell the exciting story of fusion energy and plasma science," said PPPL Director Stewart Prager. "Communication of our research is a crucial component of our laboratory activity, and we welcome her expertise."

Scientists at PPPL are collaborating with researchers across the globe to harness fusion energy, a clean, potentially limitless energy source based on the same reaction that powers the sun. The lab is managed by the University for the DOE Office of Science.

MacPherson is responsible for directing media relations at the lab and overseeing external and internal communications, for which she will collaborate with University offices as well as groups in the energy policy community and the local community. She serves as the lead media contact and spokesperson for the lab. She will write stories and edit other materials produced by the lab's Office of Communications, and will lead an effort to develop new content employing video, social media and other communications tools to tell the story of fusion energy.

"The long time scale in making fusion energy a commercially available source only emphasizes the need for a good, balanced communications effort," MacPherson said. "I am so excited to be part of this effort to convey the importance of this research."

With the University's Office of Communications, MacPherson won gold and silver medals from the Council for the Advancement and Support of Education for her news releases on subjects including astronomical sciences, chemistry, physics, mathematics, molecular biology, music theory and public health.

During an award-winning career in daily newspaper journalism, most of it at The Star-Ledger of Newark, MacPherson reported on numerous breakthroughs in science -- including PPPL's Tokamak Fusion Test Reactor experiment that attained record levels of fusion power -- and examined the research behind the controversies over genetically engineered food and global warming. Earlier, she was a reporter and manager of the Star-Ledger's Passaic Bureau in Paterson and a police reporter at the Bergen Record in Hackensack.

She succeeds Anthony DeMeo, who retired in June as PPPL's head of information services after 34 years.

The lab is located on 88 acres of the University's Forrestal Campus in Plainsboro, N.J.