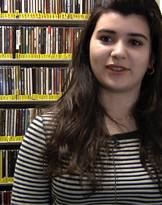 Princeton University's radio station, WPRB, draws listeners from Princeton and beyond. Above, senior Maryam Patton talks about the experience she's had of being one of the student deejays.

Princeton University's radio station, WPRB, draws listeners from Princeton and beyond. Above, senior Maryam Patton talks about the experience she's had of being one of the student deejays.

In addition to their classes and various extracurricular activities, some Princeton University students are dedicating time to operate a 14,000-watt radio station that can be heard from Princeton to parts of New York City, Philadelphia and Wilmington, Del.

WPRB, located in the basement of Bloomberg Hall, is a commercial and nonprofit station that broadcasts a wide variety of musical selections as well as live sporting events during the academic year. The station can be found at 103.3 on the FM dial and is streamed online via iTunes.

This video gives an inside look at WPRB and a few of its dedicated staff members. In addition to students, the station welcomes alumni and members of the surrounding community to be a part of the staff.

WPRB deejay Teri Noel Towe, an alumnus from the Class of 1970, recently celebrated the 45th anniversary of his first broadcast at the station.

"One of the things that really gives me a great deal of pleasure is to see that WPRB continues to be as rewarding for and as much fun for the … kids as it was for me in 1968," Towe said.

Working at WPRB can be just as rewarding for community members as it is for students and alumni, according to Alex Basile, who grew up in the surrounding community and first got involved with WPRB while in high school.

"The diversity of the extended WPRB community is I think one of its greatest draws," Basile said. "I've met a lot of really great people here, and I made a lot of friends, and I've learned a lot about broadcasting and business and music."