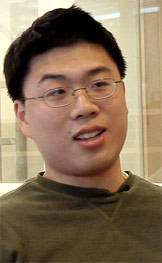 Junior Alan Yang is one of eight undergraduates interviewed for a new video about what they have brought to the University community, what they have discovered about themselves and how they have changed since being on campus. An operations research and financial engineering major, he's worked on the website for WPRB, the campus radio station, and done layout for the Nassau Literary Review. In addition, he's shot video and gotten involved in Sympoh, a breakdancing crew, and he's also shot video for the Office of Sustainability.

Play a video of undergraduates reflecting on their Princeton experience.

A few years ago at this time, Isaiah Miller was thinking about going to film school. Vanessa Rodriguez was determined to major in English. And Alan Yang thought he might go pre-med while also pursuing a degree in operations research and financial engineering (ORFE).

Today, Miller is a sophomore planning to concentrate in comparative literature at Princeton and juggling an active life, both on the academic and extracurricular side, as a filmmaker. Rodriguez is about to graduate from the University with a degree in history and a certificate in Latin American studies. Yang, a junior, is still majoring in ORFE, but has discarded the idea of pre-med in favor of a certificate in applications of computing.

Thinking back over their time at Princeton, these three undergraduates and others recently interviewed said they had some idea of what they wanted to do when they got their letters of acceptance. But once they set foot on campus, that idea evolved through a process of discovery. At the same time, these students have transformed the University through their presence by enriching academic discourse, mentoring other students and organizing new activities.

"I had my heart set on [being an English major], and once I got here I started taking classes in other departments," said Rodriguez, who is from San Antonio, Texas. "I ended up in the history department. I've learned to be a little bit more lenient with myself when it comes to sticking to a long-term plan. But I've also learned to narrow down what I want to do in the future, which sounds really contradictory." 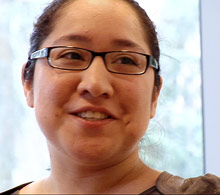 Senior Vanessa Rodriguez has concentrated in history and plans to pursue a career in nonprofit law.

Rodriguez is one of two seniors recently awarded ReachOut 56-81 Fellowships, which provide $30,000 grants to undertake a yearlong public service project after graduation. She plans to work with Texas Rio Grande Legal Aid on a project to offer legal assistance to the homeless in San Antonio. She also has earned a Liman Public Interest Law Summer Fellowship from Princeton's Program in Law and Public Affairs to support her work. She intends to go to law school after her fellowships are completed to pursue a career in nonprofit law.

Senior Elizabeth Dilday also ended up concentrating in history, but had intended to major in math or science. "The second semester of my sophomore year, I took 'The History of East Asia Since 1800,' which changed my mind about history," she said. "I thought that it was so much fun to learn about the events that happened in the past two centuries and how they have shaped today's foreign relations in the United States."

One of her first experiences at Princeton was participating in a pre-orientation backpacking trip in the Catskills through Outdoor Action. The following spring, she signed up to be a leader and has guided a trip of freshmen each fall. Dilday also has played water polo and served as co-chair of the University's Alcohol Coalition Committee. She recently decided to revive her interest in singing and combine it with her love of sports. She and a friend on the golf team have created an a cappella group -- Jock Jams -- that is accommodating to student-athletes' training and travel schedules.

Dilday, who is from Long Beach, Calif., plans to spend a postgraduate year completing pre-med requirements, and then to enter medical school.

Alan Yang has set aside his pre-med plans to focus on ORFE -- for now. But being the kind of person he is, he could very well pick them up again later.

When asked what he thought he brought to the University, Yang said, "Something that I've found valuable is not so much being willing to try new things, but actually being willing to give things that you know you're bad at another shot. I find that that's helped me a lot here."

Yang, who is from Midlothian, Va., played tennis and the piano in high school. "It was very competitive and very structured," he said. Since he had excelled in these activities, he thought he would continue with them when he came to Princeton. "And then I got here and that didn't happen," he said.

Instead, he's worked on the website for WPRB, the campus radio station, and done layout for the Nassau Literary Review. In addition, he's shot video and gotten involved in Sympoh, a breakdancing crew, and he's also shot video for the Office of Sustainability. 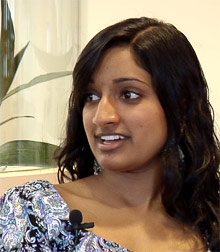 Junior Maya Srinivasan, a mechanical and aerospace engineering major, took up dancing for the first time at Princeton.

Junior Maya Srinivasan, who is from San Antonio, has broadened her own horizons when it comes to extracurricular activities. A singer in high school who hadn't danced much, she joined Naacho, Princeton's Indian dance troupe, and served as president of the group last year. She also sings with the Glee Club and volunteers with Princeton Engineering Education for Kids, which visits classrooms in the community.

She is completing a major in mechanical and aerospace engineering, with certificates in materials science, engineering biology and robotics. All of this requires a considerable amount of time management and a strong support system, she said.

"In my department we really are a family," Srinivasan said. "That kind of support and knowing that you have people who genuinely care about you is so reassuring when you're trying new things or things [in which] maybe you're not as successful as you want to be. It's definitely reassuring to know that you're not alone competing with everyone."

Junior Waqas Jawaid, who is from Karachi, Pakistan, said he was slightly intimidated when he arrived at Princeton by the caliber of the students and his impression of their ability to manage schedules. "It was a little challenging, but I think in retrospect I feel a sense of fulfillment having gone through that and having learned that I can do more than what I had expected of myself," he said. 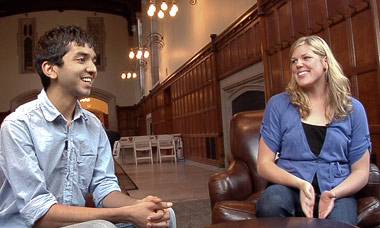 Junior Waqas Jawaid of Karachi, Pakistan, and senior Elizabeth Dilday of Long Beach, Calif., had an animiated discussion about their interests, which ranged from photography and student volunteerism to water polo and a cappella singing.

An architecture major, Jawaid draws, paints and designs graphics. Last year, he received a Martin Dale Summer Award from the University to spend a month in Paris and a month in Delhi, India, undertaking a comparative photography and painting project. He has managed publicity and publications for the Student Volunteers Council and has served on its executive board. He also has been active in the Princeton Peace Network and as an Orange Key campus tour guide.

"Art is a universal medium, a sort of language that allows communication or the building of bridges between different cultures, different peoples," he said.

Bringing together different cultures and people also is an interest of Zvi Smith, a senior majoring in politics from Los Angeles. "It started dawning on me that this was something I was interested in when, in my freshman dorm, a good friend of mine was Palestinian," said Smith, who is Jewish. "I had lived in Israel for two years after high school. And our interactions were helpful for me to get a sense of what other people were thinking. And there was something valuable to be gained from these kinds of interactions. Friendships can actually develop in ways that maybe can change the way people think about each other politically." 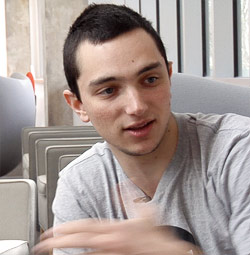 After his experience in a dorm, senior Zvi Smith decided that friendships might be able to change the way people think about each other politically.

Last summer, Smith was one of 12 students and recent graduates who traveled to Jordan on a trip organized by Princeton's Religious Life Council to meet with students and scholars from that country. This spring, he is among a group of Princeton undergraduates hosting a conference that will bring together 30 student leaders from Jordan, Morocco, Egypt, Lebanon and the United States.

The kind of enlightening conversations that happen at such events are what drew Isaiah Miller from Tucson, Ariz., to Princeton. Originally interested in attending film school, he decided to come to Princeton after talking to a professor and some students at the school in which he was interested. "I got the general consensus that it would be better to get a liberal arts education that gave me a broader perspective than to go right into film because then I would actually have something to really communicate with my films rather than just learning the technique," he said.

"Being here actually exposed me to a lot of different people from all over the country and all over the world, and that was really educational," added Miller, who describes his own heritage as Asian, African American and German-Jewish, but his high school as homogeneous. "That was probably the biggest growing experience for me: to actually talk to people who didn't come from my background."

Miller who considered majoring in psychology, anthropology and English before deciding on comparative literature, also plans to earn a certificate in visual arts focusing on his interest in film. He works in the University's Broadcast Center, and has produced videos for a number of student organizations, including the diSiac and BodyHype dance companies and the publication Business Today. 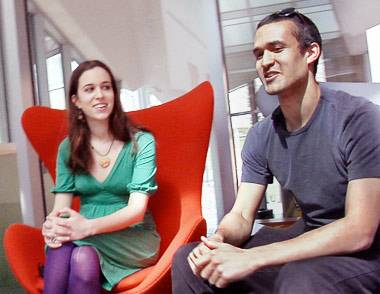 Senior Brittany Haas and sophomore Isaiah Miller both had been thinking about attending art schools before deciding to come to Princeton for a broader, more comprehensive education.

"I felt like music was already so cemented into who I was and what I knew I wanted to be doing, that I should take this chance to do something else and grow," she said. "I knew I wanted to keep learning. Princeton definitely gave me opportunities that I never would have had otherwise. I'm an EEB [ecology and evolutionary biology] major, so I went to Panama last spring, which was awesome and something I would probably never have gotten to do otherwise."

Haas, who is earning a certificate in musical performance, also has learned to play the drums, joined the Princeton University Band and taken an Indian music class. In addition, she's been working with faculty member Dan Trueman on composing music.

She said, "Being somewhere where you're surrounded by people that are working so hard and that have so many amazing, crazy things to offer and come from all these interesting places, and just are ready to change the world and go out and do really great stuff -- it's really, really inspiring."