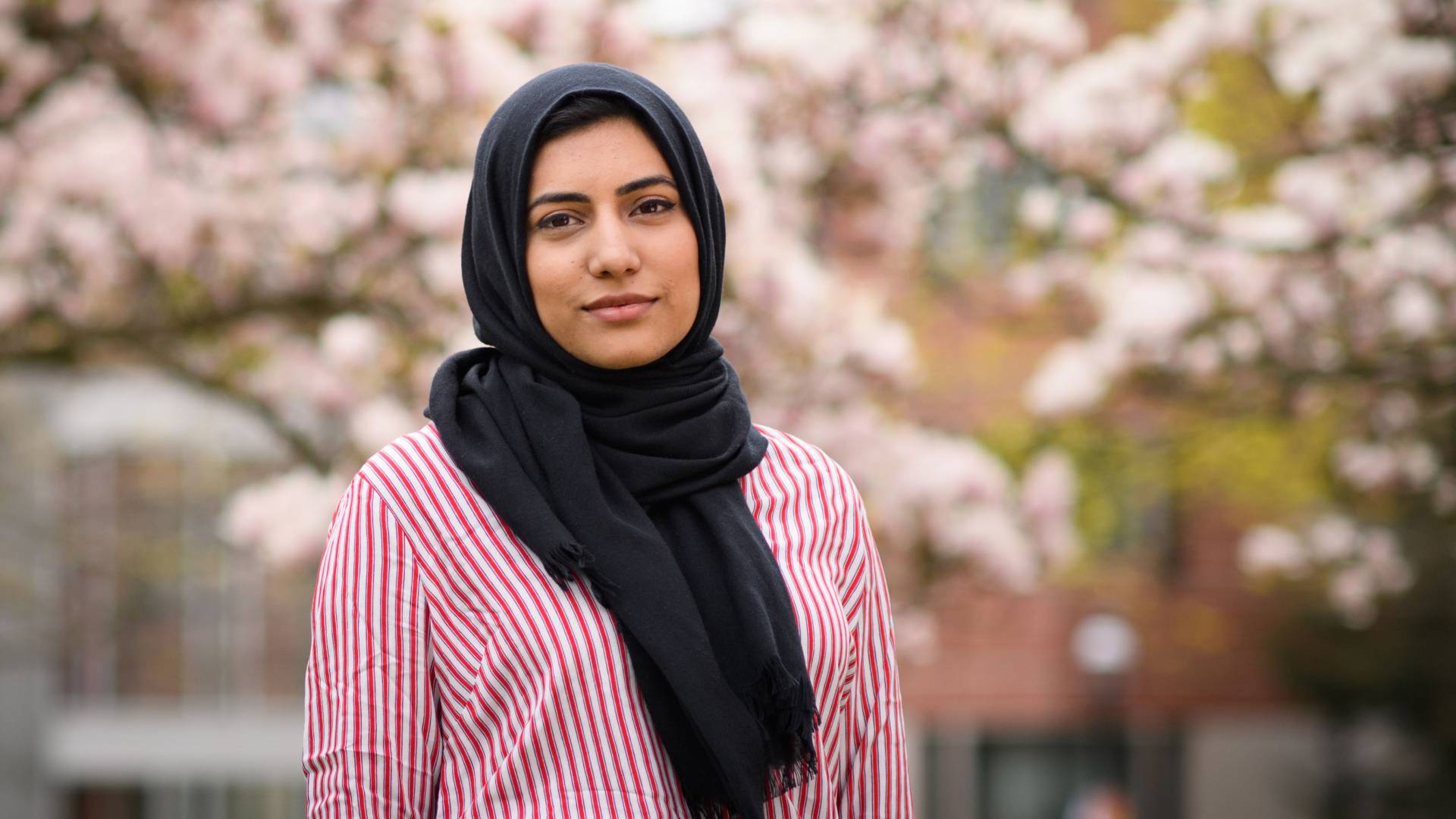 Liz Fuller-Wright, Office of Communications
Rabia Khan, who will graduate in June with a degree in ecology and evolutionary biology and a certificate in global health and health policy, worked with her senior thesis co-advisers Andrew Dobson and Jessica Metcalf to understand current measles dynamics in Pakistan.
Photo by
Sameer A. Khan/Fotobuddy

When the Khan family left Pakistan with their three young children, they never imagined that their then-3-year-old daughter would return as a student at Princeton University, let alone that she would be tackling a problem that has frustrated global health researchers.

"Pakistan was one of the last few countries where smallpox existed — and now one of the last three where polio exists," said Rabia Khan, who will graduate in June with a degree in ecology and evolutionary biology (EEB) and a certificate in global health and health policy.

Khan researched polio her junior year and wrote her spring junior paper about how successes in smallpox eradication can inform polio and measles elimination. "I have a personal connection to the topic," she explained. "When my aunt was a child, there was a lack of knowledge of and access to vaccinations. She got polio, and because of that, she’s now paralyzed from the waist down. Knowing that vaccination would have prevented this from happening has influenced why I care so deeply about this topic."

For her senior thesis, Khan concentrated on measles, which had been in decline in Pakistan but has rebounded in recent years. Nationwide, the number of measles cases doubled between 2016 and 2017.

“Smallpox, polio, measles — with all of these diseases, we’ve done a pretty good job of knocking them back,” said Andrew Dobson, a professor of ecology and evolutionary biology and one of Khan’s senior thesis co-advisers. “Always, the last places in the world that refuse to go to eradication are close to war zones.”

Dobson hopes that Khan’s research will get published.  “The medical community — the epidemiological community — is quite desperate to know what’s going on in Pakistan,” he said. 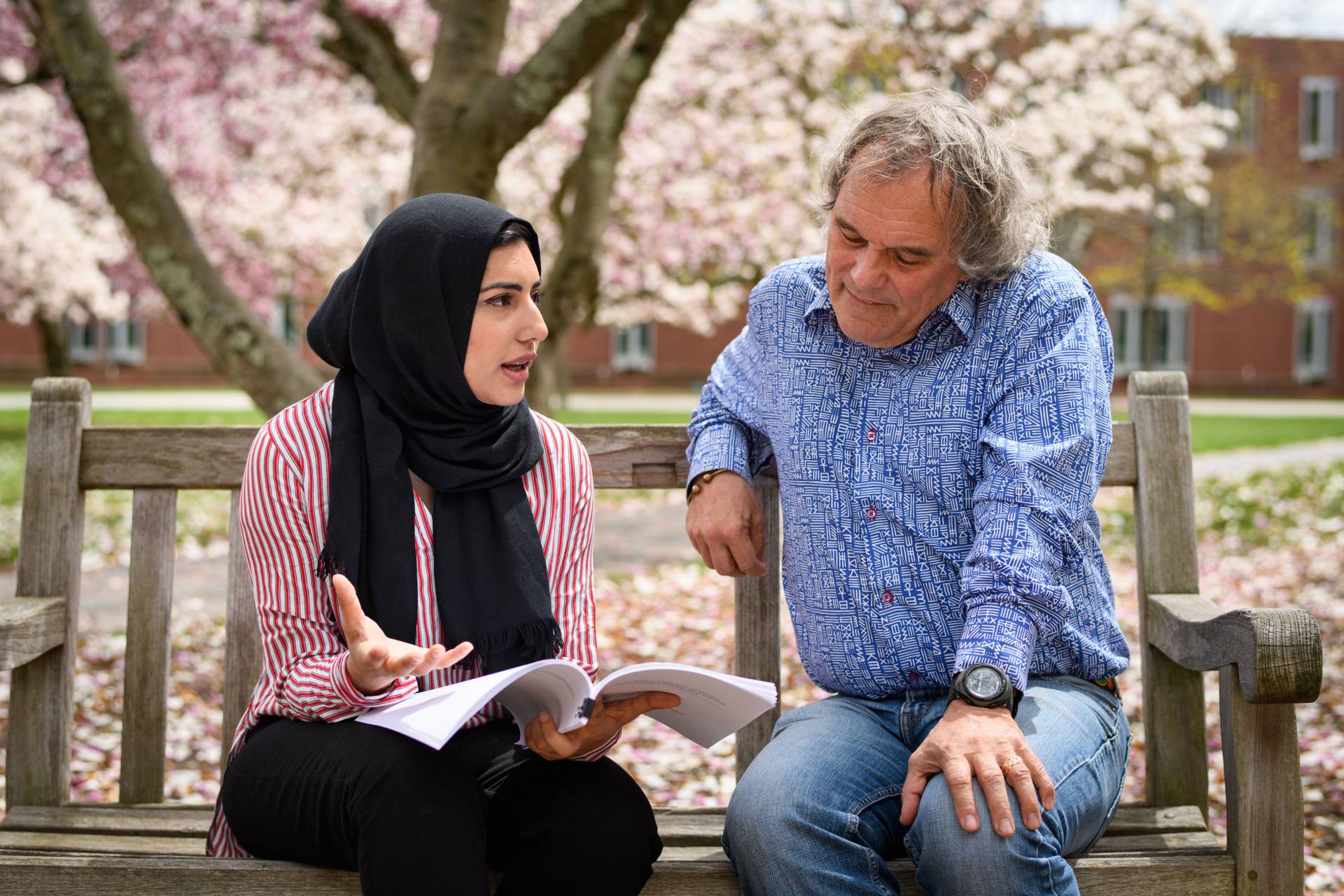 Khan and Dobson review figures from Khan's senior thesis on a bench outside Eno Hall.

Khan’s original goal was to map out past and current measles infections across Pakistan in order to predict the trajectory of the disease over the next few years, including whether it might be eliminated in the country. But she almost immediately ran into the same hurdle that has stymied other health researchers: “There’s such a lack of parameter data,” she explained. “It was really hard to even get the number of measles cases from different parts of Pakistan, because disease data across the country is really disjointed. There’s no national surveillance system, so I had to connect with health professionals in all the different provinces.”

Pakistan doesn’t publish contact information for its health professionals, so during the summer before her senior year, Khan traveled to Islamabad to build a network of contacts within Pakistan’s National Institute of Health (NIH). With each health official she met, she asked for the email addresses of workers in other provinces and districts.

In all, she sent out more than 400 emails requesting information. “I wasn’t asking for much, just the number of measles cases,” she said, “and the fact that it was so hard shows how much needs to be done when it comes to access to data.”

“I want to highlight Dr. Tamkeen Ghafoor and Dr. Rana Jawad, who were my first contacts in Pakistan connected to NIH,” said Khan. “It is largely thanks to them that I was able to network with many other individuals and distribute my survey, and it is through them that I met Dr. Naveed Masood,” who provided comprehensive data about Sindh province that proved key to Khan’s analyses.

When Khan got back to Princeton, she was overwhelmed by how uneven and disjointed her various datasets were. She reached out to her other co-adviser, Jessica Metcalf, an assistant professor of ecology and evolutionary biology and public affairs. “Professor Metcalf helped me narrow my focus to that [Sindh] dataset,” Khan said. “That was awesome because finally, I had a direction.”

For Sindh province, Masood had provided the number of measles cases appearing each week in the first half of 2017, along with extensive parameter data.

“What I wanted to do was highlight real-time measles case trends in Sindh to inform current vaccination and surveillance strategies in the area,” Khan said. “I’m doing that in this province, but it needs to be done nationwide.”

After she began analyzing the data, Khan was startled to discover no correlation between disease prevalence and the government’s reported vaccination rates in the different districts of Sindh. “You’d expect that the regions with the lowest vaccination rate would have higher prevalence, but I didn’t find any significance between those,” she said.

She attributed the disconnect to the lack of standardized recordkeeping and disease surveillance. To calculate the vaccination rate, officials currently tally the number of doses distributed in a region and divide that by the number of people in the target population, usually children. “You can even see reported vaccination rates of over 200 percent,” Khan said, “and there’s no way of tracking how many of those people are getting multiple doses and how many people aren’t getting it at all.”

Khan had anticipated finding “hot spots” — where many children are infected with measles around the same time — in crowded urban centers like Hyderabad and Karachi, but instead she found them in rural areas. After quantifying “urbanicity” and running the statistics, she concluded that vaccination in Sindh province has recently been successful in the cities, but not in the countryside.

In her thesis, Khan calls for changes to vaccination and surveillance strategies, including national adoption of a relatively new field-based electronic Disease Early Warning System known as eDEWS, which would allow for real-time surveillance and reporting of infectious disease cases.

In addition to her data assembly and analysis, Khan also received Institutional Review Board approval to survey 75 health officials, health workers and epidemiologists about their attitudes toward whether measles could be eliminated in five years, 10 years, 20 years or even 50 years.

“I came up with the survey idea after researching the story of smallpox,” Khan said. “The countries where smallpox elimination lagged most were places where the people who were in charge of the policies didn’t really believe it was going to happen, so they didn’t put as much effort or resources in.”

She found that officials working in the provinces with the most measles cases — Sindh and Balochistan — were most ambivalent that the disease would be easily eliminated, while young professionals were the most optimistic. 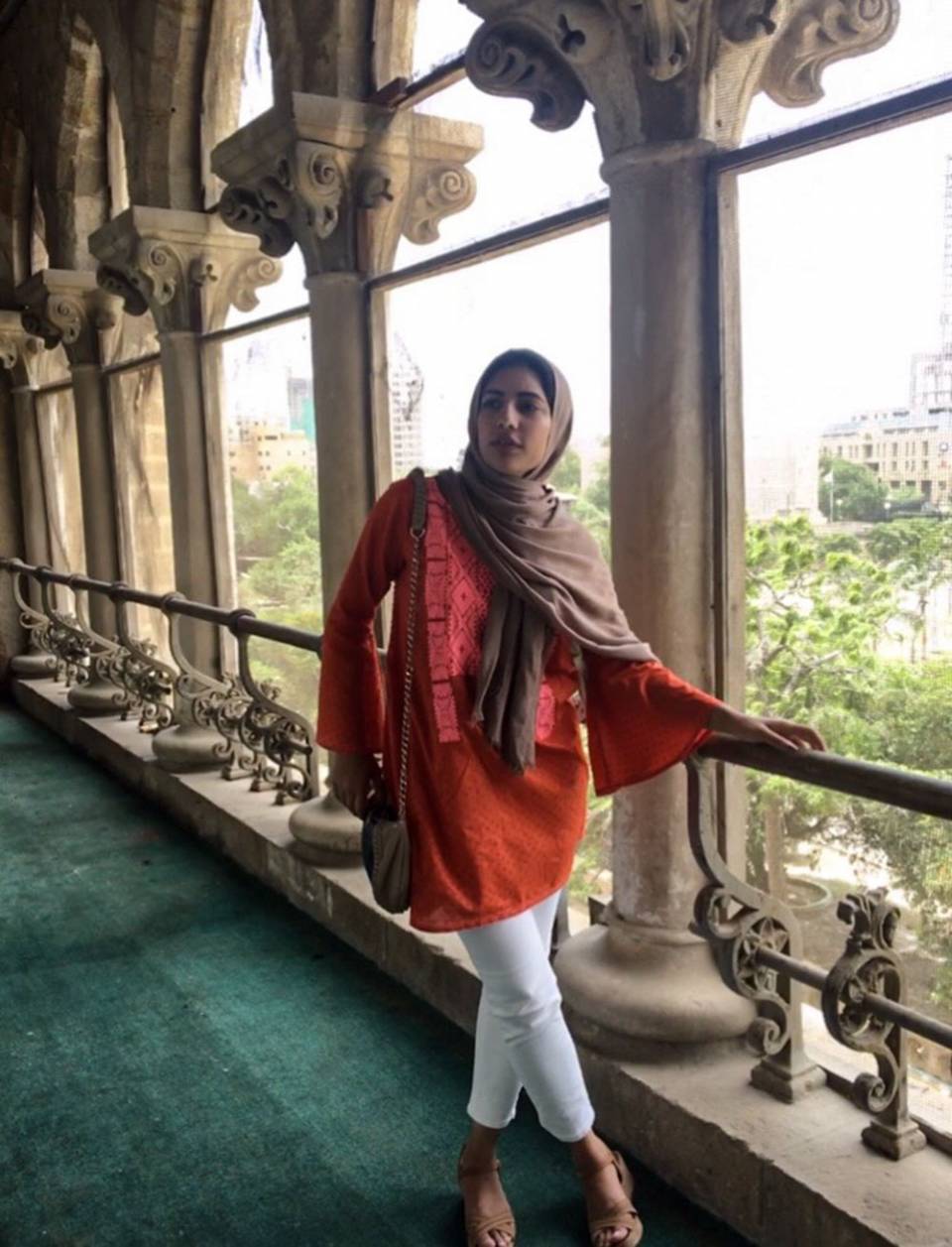 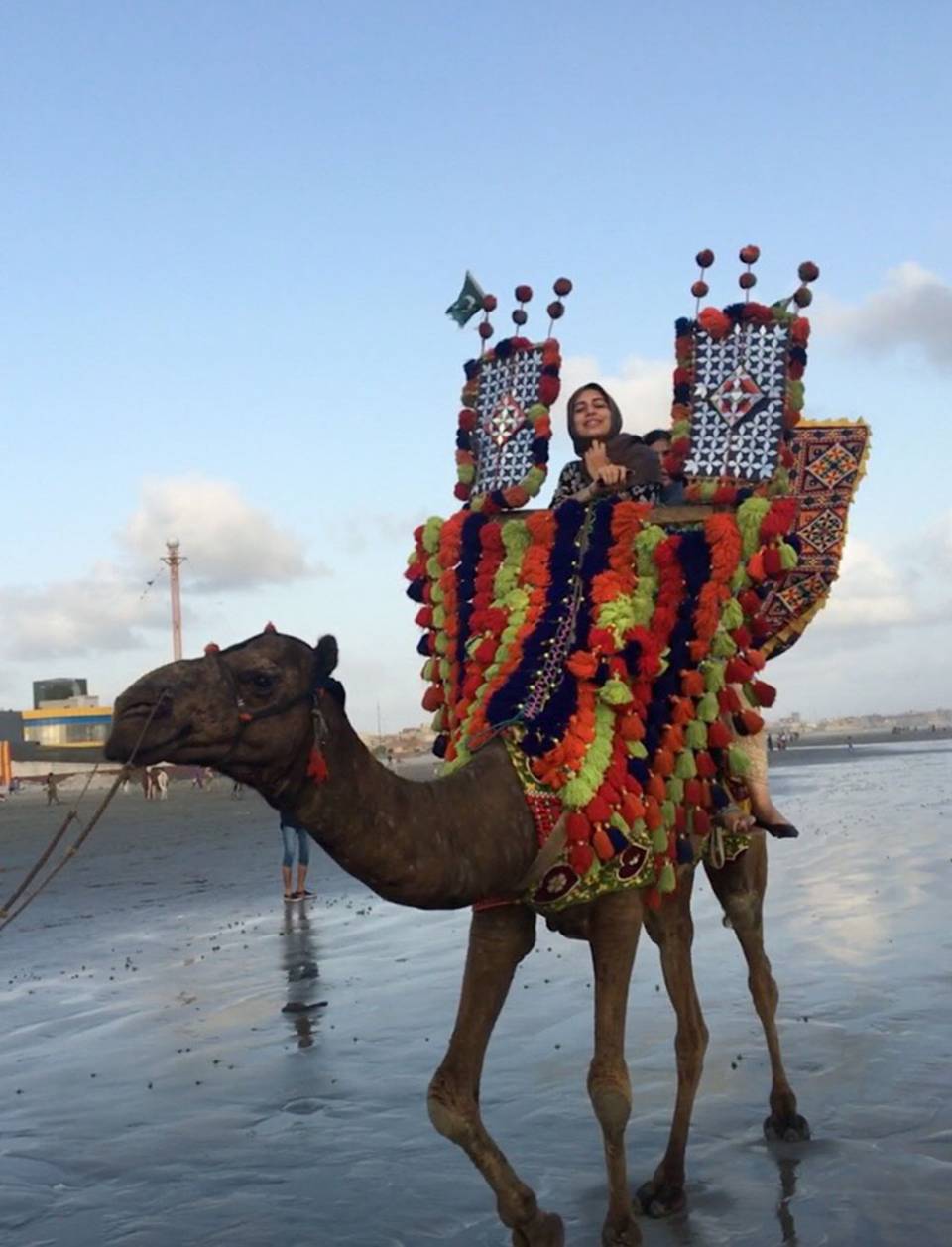 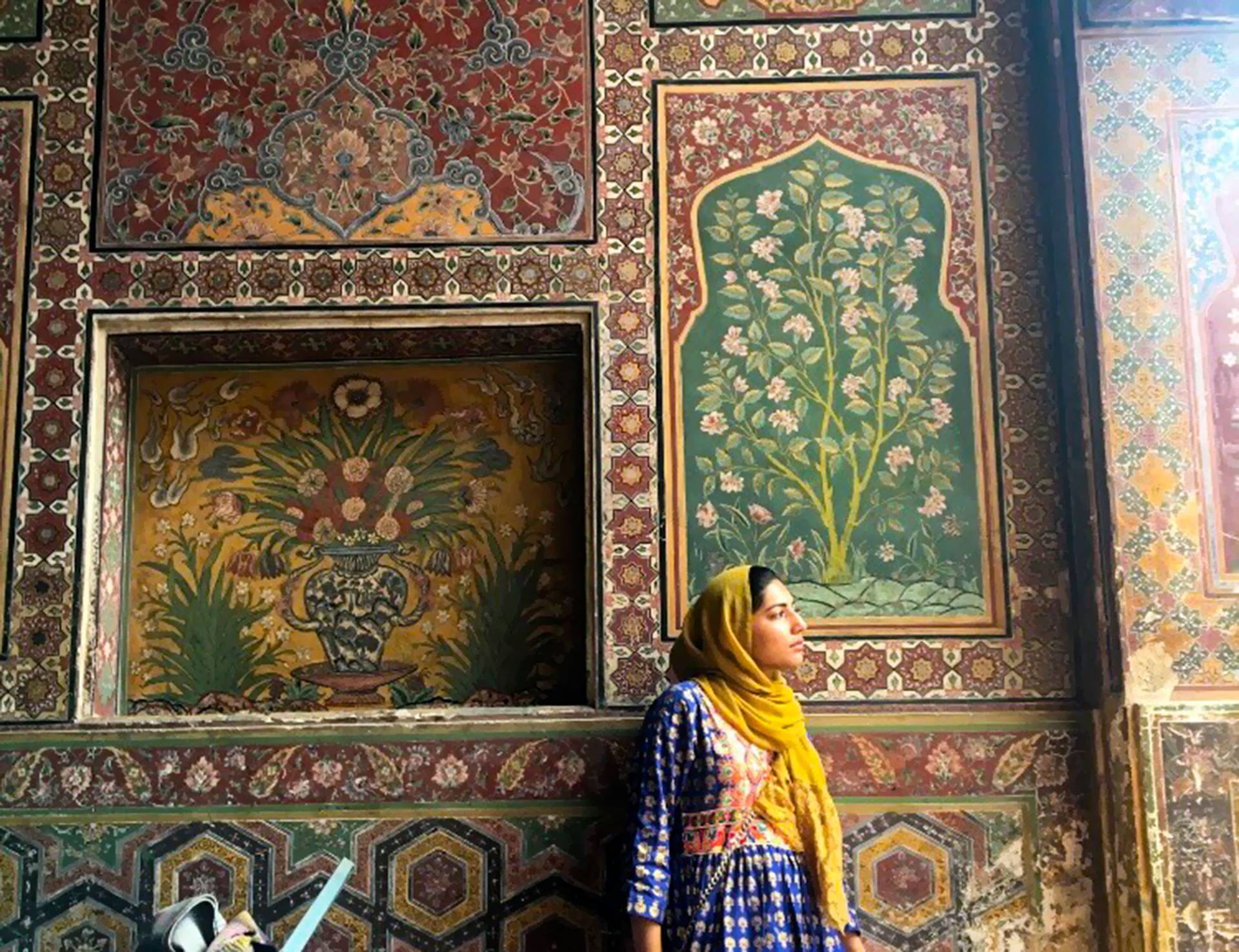 Khan enjoys time with her family, riding a camel at Clifton Beach during her Karachi visit.

Securing permission and funding was a challenge, Khan said, but with help from Dobson, she cleared all the travel hurdles. “Without his support, I wouldn’t have been able to go,” she said.

“She put together a very nice proposal, and we sent it in,” Dobson said. Ultimately, her travel and research were funded by the EEB department, Princeton Institute for International and Regional Studies, Program in South Asian Studies, and Office of Undergraduate Research.

Family members in Pakistan also supported her. Two of Khan’s aunts and one of her uncles are doctors in Pakistan, and she was accompanied by her mother and grandmother during her three-week stay in Islamabad. “My mom was awesome and went with me to NIH the first couple days I was there, so I wouldn’t be just a college senior coming in, this tiny girl, alone. She wanted to show them, ‘There’s a family behind her, and she’s standing her ground, take her seriously.’”

From Islamabad, Khan traveled to Lahore and Karachi to connect in person with health professionals she had been emailing.

“The experience was really great for me because I got to explore Pakistan,” said Khan. “I’ve never been in Islamabad for that long. I’ve never been to Karachi or Lahore. … I knew sophomore year that I wanted to do something in Pakistan, but I had no idea what I wanted to do. It was really amazing to use my senior thesis experience not only to do the research but also to connect with my family. I’m so grateful for Princeton for that,” she said.

“I hope other students realize — this [the senior thesis] is a way that they can connect to their roots as well.”

The seven weeks in Pakistan doing senior thesis research wasn’t the first time Khan benefited from Princeton’s commitment to international study. She participated in a study abroad program in Tanzania; received a Martin A. Dale ’53 Summer Award to explore Islamic spirituality in southern Spain and Morocco; spent three months in Panama with EEB’s Semesters in the Field Program, from which she hopped to Peru for a spring break trip; and went on a medical service trip to Ecuador as part of her internship with Timmy Global Heath, funded by the Center for Health and Wellbeing.

Khan had never expected to travel so extensively. “I applied to a ton of things, and the things I got accepted to were always abroad.”

She is awed by the possibilities that have opened up to her since the Diversity Immigrant Visa Program helped bring her family to Newark, New Jersey, when she was a toddler. Her trip to Pakistan put that into perspective, she said.

“I couldn’t stop thinking: If we hadn’t moved, if my parents hadn’t left their entire family to go to a place where they didn’t know anyone, if they hadn’t made all these sacrifices for us, my realities would be so incredibly different,” she said.

“The depth of knowledge that I have gained here, the kind of opportunities that I have come by, and the passion I have found for epidemiological and public health research, it’s crazy to think about. … My mom didn’t get to complete her college education because she was married young, so it’s a blessing, really, that now I’m here at Princeton.”

Khan’s next goal is pursuing an M.D./M.P.H. program.

The worm in the bud: Do parasites interfere with immunization?