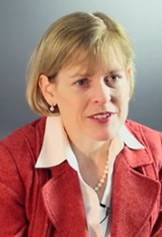 Princeton University historian Angela Creager spent more than a decade researching early efforts to transform knowledge and technology developed for the Manhattan Project to peaceful uses. The research culminated in a new book, "Life Atomic: Radioisotopes in Science and Medicine," which details how that effort made possible important breakthroughs in medicine and biology.

Even before the end of World War II, scientists working on the Manhattan Project saw a future for their work beyond military might.

A new book by Princeton University historian Angela Creager explains how knowledge and technology that grew out of the secret U.S.-led effort to build atomic bombs delivered on that promise — making possible important breakthroughs in medicine and biology.

In this video, Creager discusses those breakthroughs and how they happened.

"Generally when both ordinary people and scholars have thought about the legacy of the Manhattan Project, we thought about the way in which physics and engineering were put to military use. We thought about a destructive legacy, the arms race, the Cold War," said Creager, the Philip and Beulah Rollins Professor of History. "Part of what I discovered was that atomic energy had just as much of a legacy in some of the fields we think of as peaceable as it did in military uses."

The book, "Life Atomic: Radioisotopes in Science and Medicine," is the culmination of more than a decade of research by Creager, who traveled across the country to study unpublished government documents and the papers of scientists involved in military and civilian research.

Creager, who joined the Princeton faculty in 1994, teaches undergraduate and graduate courses on the history of science, the history of biology, gender and science, and technology and science. In 1998, she received the President's Award for Distinguished Teaching at Princeton. Creager is also the author of "The Life of a Virus: Tobacco Mosaic Virus as an Experimental Model, 1930-1965." She is a fellow of the American Association for the Advancement of Science and president of the History of Science Society. Creager earned a Ph.D. from the University of California-Berkeley and a bachelor's degree from Rice University.

Among the breakthroughs linked to atomic research that Creager highlights in "Life Atomic":

These advances were made possible by the availability of radioisotopes, which are radioactive isotopes, or variants, of stable atoms. In the post-World War II era, the U.S. government produced radioisotopes in some of the same nuclear reactors that had been built to produce material for nuclear weapons. The radioisotopes were promoted by the government and sold at a discount to laboratories, hospitals and companies, Creager said.

Radioisotopes quickly gained acceptance as both medical therapies and radiotracers, she said.

"Tracer uses are when you replace one atom of a compound with a particular radiolabeled atom so that you can follow that label through the ordinary chemical or biological processes the compound goes through," Creager said. "So radiotracing was very widely applicable to study biochemistry, physiology, endocrinology and eventually ecology. Basically anything where a chemical compound is in motion, radiotracing is a way to look at change over time, and look at chemical transformations."

Creager said the study of photosynthesis offered a good example of how radiotracing was used. Researchers grew algae in a glass container exposed to bright light. They added carbon dioxide labeled with the radioisotope carbon-14 and let the algae take up some of the carbon dioxide. They then examined how the radiolabeled carbon had moved from one compound to another through the chemical reactions of photosynethsis.

"Even by the late 1940s, it was already apparent this could be used to crack open the photosynthetic pathway, which really hadn't been understood before," Creager said.

In a similar way, animals, and later humans, were fed food containing a radioisotope of iron in experiments that aided the understanding of iron uptake, Creager said.

The book also traces changes in the perceptions of scientists and the public about the risks of radiation. An investigation by a presidential panel in the 1990s detailed the ways in which research subjects — sometimes without their knowledge — were exposed to radiation during the postwar period. This included, for instance, pregnant women in experiments with radioiron. Creager said documents declassified in the wake of that investigation aided her research.

"Now we think the government should be involved at some level in protecting civilians from exploitation by a medical establishment that is eager for research subjects, but in the 1950s the thought was that physicians should be trusted to regulate themselves," Creager said. "The human research using radioisotopes wasn't atypical of other types of medical research at the time, even though we may look back and think it was a really bad idea."

Creager's research has carried over to the classroom. For example, she once taught a junior seminar titled "Atomic Legacies." As part of the class, eight students traveled with Creager to the National Archives outside Washington, D.C., for two days of research.

"The junior papers that were produced from this seminar were terrific, and it was also a great experience to go with them to the archives and, in many cases, have the students encounter unpublished sources for the first time and think about how they might go into writing a historical account," Creager said.

Creager's research for "Life Atomic" was supported by grants from the National Science Foundation, the National Institutes of Health, the National Endowment for the Humanities and Princeton University.

She has begun work on her next project, which examines changing ideas about environmental carcinogens from the 1960s through the 1980s. Many of those ideas, she said, were first shaped by research on radiation.