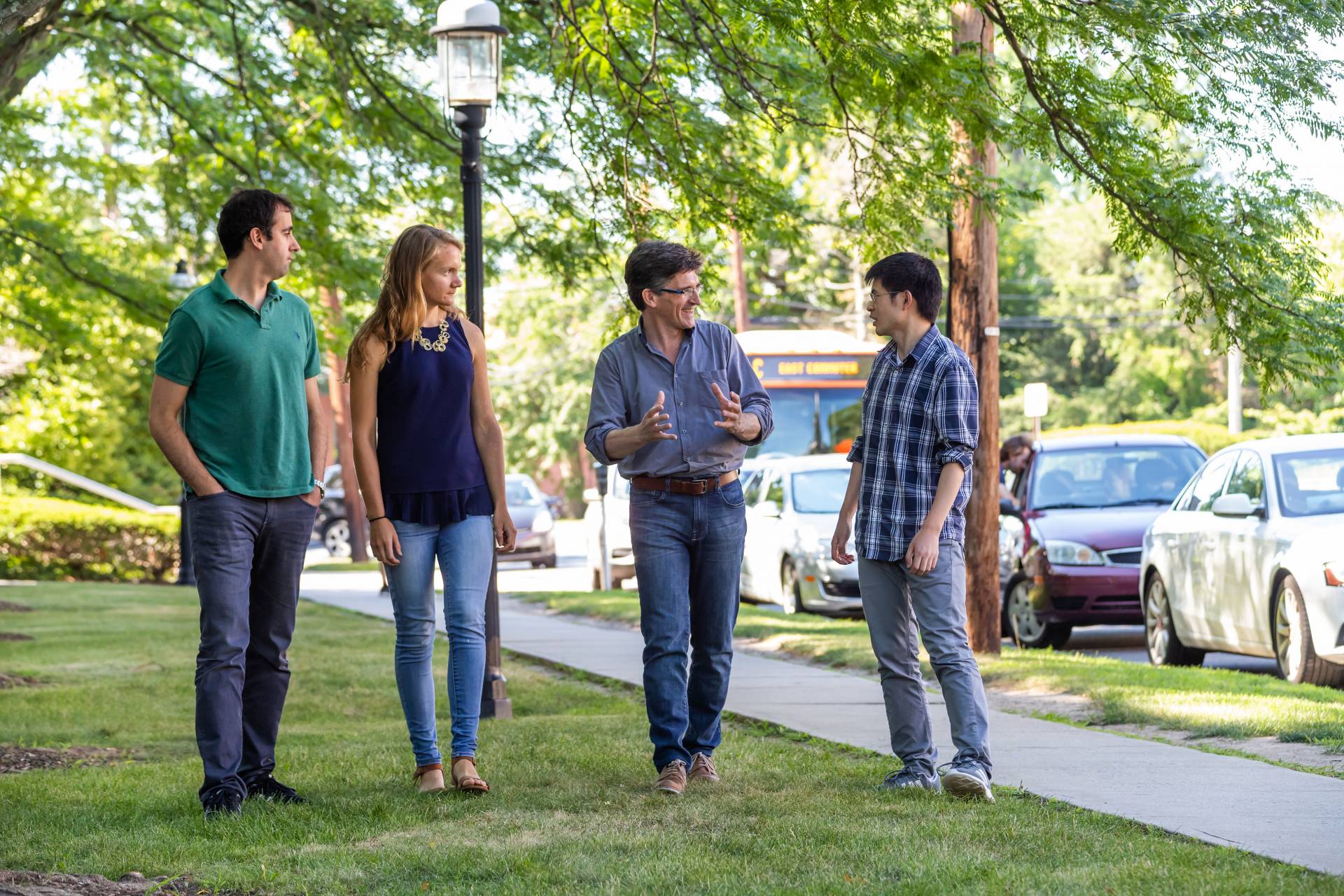 At first blush, these two objects couldn't appear less alike. Yet, according to a Princeton University study published June 29 in the journal PLoS ONE, the two complex systems share striking parallels in adapting to changing environmental conditions. Plants, of course, evolve spontaneously, while engines "evolve," as it were, through conscious human planning. For both, adding new components to a successful core process, rather than altering that core process itself, has proven an enduring strategy.

In the case of plants, the core process is photosynthesis. Over millions of years of natural evolution, plants have developed two efficient photosynthesis variants to deal with starkly different climates. Likewise, in fossil fuel-powered engines, the internal combustion process has remained largely unchanged. But over the engines' comparatively brief 150-year history, two efficiency-boosting additions — the turbocharger and the hybrid electric vehicle — have adapted them to new niches.

The study draws on ongoing ecohydrology research by corresponding author Amilcare Porporato, the Thomas J. Wu ’94 Professor of Civil and Environmental Engineering and the Princeton Environmental Institute, as well as data on engines for World War II-era fighter planes and modern car brands. Exploring the similar problem-solving across these contrasting systems could provide beneficial insights into natural evolution and technological innovation, the researchers said.

"We have hypothesized that natural and built systems both develop similarly in response to changing constraints, and some principles of evolution may be common to both types of systems," said first author Samantha Hartzell, a graduate student in Porporato's group and a PEI Princeton Energy and Climate Scholar. "Knowing this, perhaps we can more consciously take lessons from nature when designing mechanical systems."

The Princeton paper's findings suggest that breaking the mold of established, past success can be difficult in natural and built systems. Continuing modular innovation could long delay the foretold end of the internal combustion engine, Hartzell said. Mark Bartlett and Jun Yin, Princeton postdoctoral researchers in civil and environmental engineering, are co-authors on the paper.

"New technologies, including fuel-cell and battery electric vehicles, are riskier strategies and are taking longer to catch on than the hybrid car, since they require significant changes in manufacturing practices and infrastructure," Hartzell said. "In the end, however, they could prove to be more optimal solutions to meet our goals of reliable, inexpensive transportation that is minimally damaging to our environment."

“The analogy of likening engines to plants began as a fun way to explain nature's three photosynthetic pathways in my ecohydrology course,” Porporato said. As many of us first learn in grade school, photosynthesis is the process whereby plants reap energy from sunlight. That energy transforms carbon dioxide gas and water into food, releasing the oxygen we breathe as a waste product.

Roughly 85 percent of plants on Earth rely on the C3 photosynthetic pathway — so named because it produces a sugar molecule with three carbon atoms. Scientists estimate C3 photosynthesis evolved around one billion years ago when marine algae took up previously free-living photosynthetic bacteria into their cells. Those taken-up bacteria, or chloroplasts, have faithfully served as plants' sun-harvesting powerhouses for an eon.

The Princeton researchers likened the establishment of C3 photosynthesis to German engineer Nikolaus Otto patenting the internal combustion engine in 1876. The new engine quickly became incorporated into road vehicles of the time, much like how photosynthetic chloroplasts set up shop in marine algae.

The C3 pathway has not proven ideal in all environmental circumstances, however. When carbon dioxide availability is low, a key enzyme tends to incorporate oxygen instead of carbon into the photosynthesis reaction chain, slashing its efficiency. In response, in the last few tens of millions of years, some plants have evolved a photosynthesis variant called C4, which concentrates the amount of carbon in chloroplasts, thus driving up efficiency.

In parallel to C3 photosynthesis' limitations, the rudimentary internal combustion engine does not meet performance demands in all scenarios. When altitude increases, oxygen levels diminish. That proved to be a problem for World War II military aircraft powered by internal combustion engines. An engineering solution was found in the form of air compressors, known as turbochargers and superchargers, that force more air into the engine. These added components concentrate levels of oxygen for fuel combustion, boosting power generation. The innovation then found its way into passenger cars engines in the 1960s.

Next, the team analyzed the second major addition to the systems' core processes, this time in the form of energy storage. For plants, this is the crassulacean acid metabolism (CAM) photosynthetic pathway. It originally evolved more than 250 million years ago and helps plants survive in hot or arid conditions; cacti and pineapples are two familiar examples of such specialized flora. CAM plants keep their leaves' pores closed during the scorching day to avoid damaging water loss, instead opening the pores during the cooler night to take in carbon dioxide. Then, daytime sunlight photosynthesizes that carbon stored — battery-like — in the plant.

The use of batteries is at the heart of the hybrid electric vehicle. They offer greater efficiency than when driving speeds are variable, analogous to the variable water availability faced by CAM plants. An electric motor turns kinetic energy from braking into electricity stored in a battery. That electricity can then boost the power output of the engine.

The researchers developed a mathematical model of the efficiency of water use by CAM plants — also published recently in Ecological Modeling. This model bore out the proposed plant-engine relationship by comparing gas mileage statistics between vehicles sold in standard and hybrid electric versions.

Overall, photosynthesis in its various forms has clearly proved a winning strategy for plants, which account for a whopping 80 percent of all biomass on the planet. Likewise, the internal combustion engine has dominated land, sea and air transportation worldwide for a century.

"Once you have developed something that works very well, like photosynthesis or the gasoline engine, it tends to persist more or less unaltered," Hartzell said. "Rather than modify the underlying reactions, plants have added components — the equivalents of 'turbochargers' and 'batteries' — to make photosynthesis more efficient, just as we have added components to make our gasoline engines more efficient."

Robert Jackson, a professor of Earth system science at Stanford University who was not involved in the Princeton study, said the research can offer insights into the development of both natural and built systems.

“We can learn a great deal by comparing changes in nature across evolutionary time to changes in systems people are building today," Jackson said.

Looking ahead, climate change could throw plant and engine evolution out of alignment. Plant photosynthesis will persist, but fossil-fueled internal combustion engines are falling out of favor on account of their production of climate-altering greenhouse gases. An increasing number of vehicle manufacturers have announced plans to add electric motors to their vehicles lines next decade, or even eventually forgo internal combustion engines.

"Plants have been around for hundreds of millions of years and have weathered much greater climate changes than those we are currently undergoing, significant as they are," Hartzell said. "While our current climate changes are expected to cause changes in the distribution of certain plant types, the basic mechanism by which plants derive their energy — photosynthesis — will still be a viable option."

The paper, "Similarities in the evolution of plants and cars," was published June 29 by PLoS ONE. This work was supported by the USDA Agricultural Research Service, the National Institute of Food and Agriculture, and the National Science Foundation.