Speaking before an overflow crowd in Princeton University's Friend Center auditorium, Internet pioneers Robert Kahn and Vinton Cerf said that flexibility, both social and technical, has been central to the growth and resilience of the Internet.

"Most people tend to think of the Internet as a network — I don't," said Kahn. "To me, the Internet is a set of protocols and procedures for connecting lots of different components. It has scaled by a factor of a million over its lifetime. There is no other technical invention that I can think of that has had that much scalability."

Kahn and Cerf are often called the fathers of the Internet. Although both men prefer to share the credit with others, they wrote the fundamental rules, or protocols, that are the basis of the Net. Their original system remains the foundation of modern communications.

Mung Chiang, incoming director of the University's Keller Center and organizer of the March 12 event, noted that talk was so popular that it was streamed to the EQuad Café on campus. "It is fantastic to have these two visionary pioneers here to celebrate one particular birthday of the Internet," said Chiang, the Arthur LeGrand Doty Professor of Electrical Engineering.

That birthday is the 40th anniversary of the publication of Cerf and Kahn's seminal 1974 paper, "A Protocol for Packet Network Intercommunication." In a wide-ranging conversation, Cerf and Kahn spoke about the origins and development of their protocols and speculated on the future of the Net. 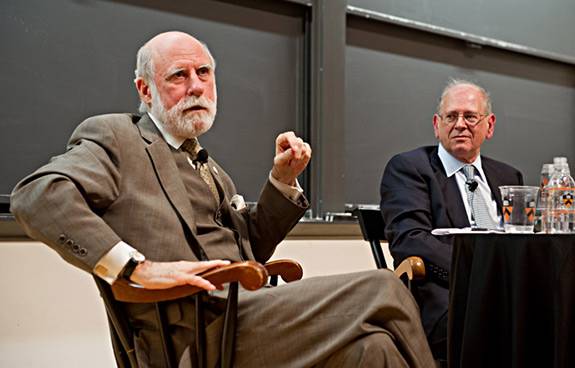 Vincent Cerf (left) and Robert Kahn speak about the origins and development of their protocols for the Internet and speculate on its future at a public event held March 12 at Princeton University. (Photo by David Dooley)

Kahn, who earned his Ph.D. from Princeton in 1964 and an honorary doctorate in 1998, began with a story of a student who asked him at a conference a few years ago how he and his colleagues managed to persuade the world's governments to allow the construction of such a pervasive international system.

"Back in the time frame when we started working on the Internet, and even before that, we were in a world very different than today's," Kahn said. He explained that personal computers did not exist; the computers that did exist operated in small isolated systems attended by technicians and scientists. Only a small group of companies had the capability to link their systems, and almost no one could conceive of a future in which linked computer network systems would straddle the globe as they do today.

"Except for me and Vint and a few others, nobody thought this was a good idea," Kahn said. "So we were given pretty much free rein."

The men said that, technically, the protocols were set up to be "agnostic" of the types of networks that were using them. The idea was that the networks would manage their internal structures, while the protocols would ensure that communication among the networks was smooth and error free.

"That led us to the problem of the inter-net, many networks hooked together," said Cerf, who began the work while a graduate student at the University of California-Los Angeles and then as an assistant professor at Stanford University.

Cerf said the culture began even before the Internet during work on its predecessor, ARPANET. For example, Stephen Crocker, who was a graduate student with Cerf at the University of California-Los Angeles and is now chair of the Internet Corporation for Assigned Names and Numbers, headed the networking working group in the ARPANET project.

"Steve's approach was a very humble one," Cerf said. "He said anybody who had a good idea ought to be able to participate in this. So he set a tone for inviting involvement, inviting participation and contribution to the ARPANET project. And I, frankly, adopted that whole thought in the Internet project."

As the Internet expanded, it created its own society. Cerf said that continues today.

"We are going to see a continuing evolution of institutions coming out of the existence of the Internet," said Cerf, now vice president and chief Internet evangelist at Google. "The constellation of institutions, organizations and companies that are involved in the Internet will continue to evolve and we have to learn how to adapt to the governance requirements that are imposed upon us by all these dynamics."

Kahn and Cerf addressed an array of other topics during their talk: the role that security has played in the development of the Internet; publications of the future; machine-to-machine communications; the use of holograms and other new input devices; the contributions that former Sen. Al Gore made in the Internet's development (they thought Gore's contributions were important and his subsequent treatment in the media was unjust).

Throughout the talk, Kahn and Cerf emphasized the importance of a practical approach and a goal of solving the problem in front of you. Kahn, who is now chairman and chief executive of the Corporation for National Research Initiatives, said that he began his career as an electrical engineer and Cerf as a computer scientist, but he said they frequently switched roles throughout the project and lent their expertise as needed.

"Between the two of us, we had a really great collaboration," he said. "It worked out extremely well."