Half-term policy courses offer two courses in half the time 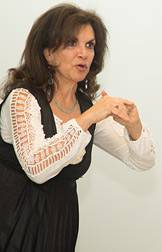 Princeton's Woodrow Wilson School of Public and International Affairs offers a wide range of half-term courses each semester, allowing graduate students to take twice as many courses in half the time. Above, Marta Tienda, the Maurice P. During Professor in Demographic Studies and professor of sociology and public affairs, speaks to the eight students in her class "International Migration and Public Policy."

This spring, seven graduate students from Princeton's Woodrow Wilson School of Public and International Affairs enrolled in a six-week crash course examining the Eurozone's financial crisis. A month later, international migration was the hot topic for a group of eight graduate students who discussed what it would take to build a country from scratch.

Both subjects — and a sprinkling of other policy-related issues — were examined through the Wilson School's "half-term courses," a form of instruction that examines public policy issues as they are being discussed across the world. These fast-paced, condensed courses examine a number of policy issues, including health, inequality and nuclear policy. Other academic units, such as the physics and sociology departments and the Princeton Writing Program, also offer half-term courses.

The Wilson School's half-term courses, which began many years ago, became more robust in 1999 under the leadership of Michael Rothschild, who was then dean of the Wilson School and is now the William Stuart Tod Professor of Economics and Public Affairs, Emeritus, alongside Christina Hull Paxson, who was the faculty chair of the Master in Public Affairs (MPA) program and is now president of Brown University. Each semester, more than 10 half-term courses are offered to master's and doctoral students, and the classes fill up quickly. Two half-term courses count as one class, so students are able to take more classes during their time at the Wilson School.

Pierina Ana Sanchez, a second-year MPA student, has taken three half-term courses at the Wilson School. She has been able to study a variety of policy topics, including social entrepreneurship and geographic information systems for policymakers. Because her graduate program is only two years long, she wanted to fit in as many classes as possible.

Sanchez graduates in June and is taking advantage of one last half-term course — "International Migration and Public Policy." Taught by Marta Tienda, the Maurice P. During Professor in Demographic Studies and professor of sociology and public affairs, the course examines the historical and contemporary literature on international migration and cross-national migration policies.

Ashoka Mody, the Charles and Marie Robertson Visiting Professor in International Economic Policy and a former deputy director at the International Monetary Fund, taught "The Eurozone Crisis and Beyond" this spring. During this March 4 lecture, he and seven graduate students unravel what fueled the crisis and what measures could mitigate further catastrophes. (Photo by Denise Applewhite, Office of Communications)

Tienda's research focuses on the demography of racial and ethnic inequality, social policy and international migration. Since she came to Princeton in 1997, Tienda has taught several half-term courses at the Wilson School, and no class has been the same.

"Before classes begin, I meet with students to discuss their specific interests in international migration. Knowing their interests, I can tailor the readings to their research," Tienda said. "This year, for example, students were interested in return migration, so we studied Mexico's policies. This is a win-win for both the students and me, though class preparation remains demanding. A field as dynamic as international migration demands nothing less."

Tienda tries to strike a balance between lecture and student participation. For the first two classes, she provides an overview of international migration, including the historical context. In the remaining classes, she divides the time equally between lectures and student presentations of specific case studies. Tienda has chosen this structure to ensure that all students are able to participate.

"Six-week courses are short and intense and best suited to narrowly focused topics," Tienda said. "Given the complexity and fluidity of international migration, I was initially daunted by the challenge of doing justice to both domestic and international perspectives. Ultimately, I decided upon a format that strikes a balance but also allows students to focus on places that build on their interests or experiences."

Ashoka Mody, the Charles and Marie Robertson Visiting Professor in International Economic Policy and a former deputy director at the International Monetary Fund (IMF), used a similar class structure when he taught "The Eurozone Crisis and Beyond" this spring. He and seven graduate students examined the ongoing financial crisis affecting the 18 countries in Europe that use the euro. This crisis has plagued the Eurozone since 2008, when a number of European banks found it challenging to obtain funds for their operations. The crisis spread to governments, some of whom have struggled to repay or refinance their debts without outside assistance.

Like Tienda, Mody examined the crisis from both a historical and political context. The class unraveled the history of the euro before and after the currency was introduced, and analyzed what fueled the crisis and what measures could mitigate further catastrophes. The sessions led to a final research report written by the students that covered topics such as interest rates set by the European banks and voter turnout for European Parliament elections.

"In each class, we reviewed key concepts and the items previously discussed," Mody said. "Without this review, the key concepts don't sink in quite as well. This helps as we transition across topics, and the students are better able to get the overview." 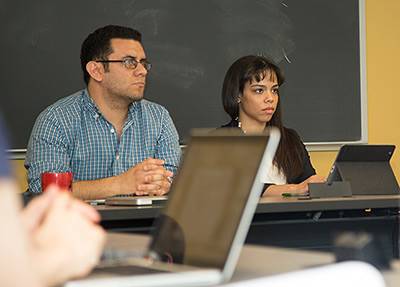 Teaching in a condensed fashion has been a fun challenge for Mody, who was previously responsible for the IMF's consultations with Germany, Hungary, Ireland and Switzerland, as well as the design of Ireland's financial-rescue program. Mody has advised governments worldwide on developmental and financial projects and policies, but rarely under such a time crunch.

"I could easily spend six hours on each topic alone, but I only have six class sessions," Mody said. "So, I have to ask myself, do I examine a few concepts in depth? Or do I approach the class with a more big-picture strategy?"

Questions such as these are part of the fun for the professors who teach half-term courses — and they're conducive to the schedules of policy practitioners, too. Some of the longest running half-term courses have been or were taught by practitioners. "The Development Challenge of HIV/AIDS," which is taught by the World Bank's Keith Hansen, a 1987 MPA/J.D. recipient, remains one of the school's most popular classes. Until Wilson School alumnus and West Point professor Michael Meese retired in 2013, his "Military Force Planning and Decision-Making" was cited as the "model half-term course" by students.

The longest-running half-term course is "Reproductive Health and Reproductive Rights," taught by James Trussell, the Charles and Marie Robertson Professor of Public and International Affairs. Trussell has led the course 13 times and was the associate dean when the half-term courses were resurrected.

"Half-term courses add variety to the curriculum and allow students to cover more topics throughout their time at the Wilson School," Trussell said. "And some classes are just perfect for six weeks. You wouldn't want to stretch them out across a semester."

"Half-term courses allow our students to delve deep into the policy issues most relevant to their careers," Rouse said. "The model has been instrumental to the school's curriculum, and we anticipate the courses continuing to be popular for years to come."