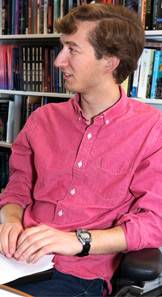 Princeton University senior Taylor Francis, a Menlo Park, California, native, grew up surrounded by technology and the startup world in Silicon Valley. For his senior thesis, Francis, a major in the Woodrow Wilson School of Public and International Affairs, is applying his interests in the tech world to examining two forms of alternative educational credentials: massive open online courses and intensive occupational "bootcamps" for software engineers.

Applying technology to multiple disciplines has long been of interest to Taylor Francis, a Menlo Park, California, native, who grew up surrounded by technology and the startup world in Silicon Valley. In his latest project, the Princeton University senior is examining some of the ways that technology and education mix.

While a student at Princeton, Francis completed internships at Facebook; Square, the mobile-based payment company; and Coursera, a platform for massive open online courses (MOOCs) that allows students from anywhere in the world to learn from professors at more than 100 leading universities, including Princeton.

For his senior thesis, Francis, a major in the Woodrow Wilson School of Public and International Affairs, wanted to apply his interests in the tech world to important policy issues. His experience at Coursera showed him that the traditional higher education model — courses in a structured program that lead to a formal degree and eventually a job in that field — is being challenged by recent educational innovations.

"Part of why people get an education is to learn," he said. "But part of it is to improve their lives by earning a meaningful and valuable credential that can hopefully earn them a job."

In his thesis, "Diplomas of the Future? The Role and Value of Innovative Academic Credentials," Francis examined two forms of alternative educational credentials: MOOCs and occupational "bootcamps," which are nine-week-long intensive programs that cost more than $10,000 and help software engineers develop necessary technical and programming skills. 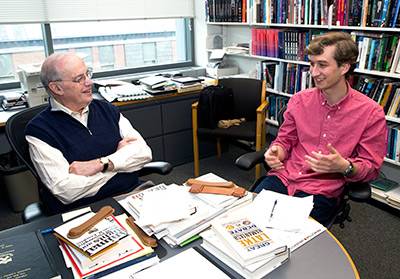 Above, Francis (right) meets with his adviser, Harold T. Shapiro, president emeritus of both Princeton and the University of Michigan and professor of economics and public affairs at the Wilson School. Francis said a highlight of his thesis work was meeting with Shapiro weekly.

"I initially thought MOOCs and developer bootcamps would be used to supplement a traditional college education and employers would value them because they signal a specific skill," Francis said. "To me, the really interesting questions were: Who is earning these credentials? What are they earning them for? And how valuable are they to employers?"

One of the main issues Francis faced in answering these questions was the lack of conclusive patterns of behavior.

"Because these programs are so new, I faced a fine line between analysis based on data and whimsical flights of speculation," he said. "I wanted to try and bring this discussion down from rhetoric and speculation. Some people say online classes will save the world, and others say online classes will ruin higher education for everyone. Instead, I wanted to focus on the statistics and facts I could find."

One of Francis' best resources was his thesis adviser, Harold T. Shapiro, president emeritus of both Princeton and the University of Michigan and professor of economics and public affairs at the Wilson School. Francis said a highlight of his thesis work was meeting with Shapiro weekly.

"Dr. Shapiro would read drafts within three hours and send me detailed comments by the next morning," Francis said. "The high rate of feedback and ideas — he's seen higher education from a lot of different angles — made this whole process quite a joy."

"Taylor carefully considered how these new innovative programs and courses may be properly assessed," Shapiro said. "He took on a very exciting new development in higher education and presented the issues they raise in a very thoughtful and well-informed manner." 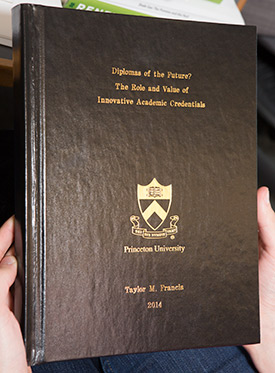 Francis holds a copy of his printed and bound senior thesis, "Diplomas of the Future? The Role and Value of Innovative Academic Credentials."

Through his research, Francis found that students pursuing alternative education credentials wanted to supplement their college education to improve their career prospects.

"Studies show that people learn similar amounts in an online class as they do in a lecture class, and my research found that people who graduate from developer bootcamps earn as much or more than the typical computer science graduate," he said. "We know these alternative methods of education work."

In addition to his research on the effectiveness of the programs, Francis interviewed recruiters and hiring managers from 20 high-tech Internet and software companies and learned what they value in a traditional college degree: selectivity, as someone else had already screened the candidate during the college admissions process; the on-campus experience that teaches interpersonal skills; and the broad intellectual foundation that teaches candidates how to think.

"The big problem for MOOC credentials is that they lack these characteristics: they are not selective — anyone can sign up or pay for a course; they are not on-campus; and accumulating one-off courses doesn't certify the broad set of knowledge employers are looking for," Francis said. "Because employers were looking for a broad mixture of skills — not a checklist of competencies — they were cautious about attributing value to online course credentials. But that could change as these certificates become more common and gain value."

The discrepancy between data that proves the effectiveness of the programs and employers' uneasiness about their merits leads to a significant trust gap, Francis found. He said one way to correct the trust gap is to improve their value.

"Universities can begin to close the trust gap by giving credit to people who complete online classes," Francis said. "Releasing data about how students do relative to other students in the class would signal something akin to the college selectivity screen."

Francis also learned that alternative education credentials are hobbled by their lack of accreditation, the process traditional universities go through every 10 years that serves as, according to the thesis, a "guarantor of educational quality and a gatekeeper for federal and state financial aid."

"Accreditation is the most pressing policy question involving alternative education credentials," he said. "Because MOOCs and developer bootcamps don't work toward a formal degree, and because they're more modular than a traditional degree, they face a significant amount of scrutiny. To remedy this, universities and accreditation agencies could negotiate common standards for these programs."

Considering all of the issues that alternative education credentials raise, Shapiro lauded Francis' ability to take a new issue and deconstruct it effectively.

"Taylor writes very well, analyzes situations and data carefully, is historically informed and deploys various models with some thought and imagination," Shapiro said. "Anyone seriously interested in this issue would benefit from considering Taylor Francis' work."