Negative stereotypes can cancel each other out on résumés

Stereotypes of gay men as effeminate and weak and black men as threatening and aggressive can hurt members of those groups when white people evaluate them in employment, education, criminal justice and other contexts.

But the negative attributes of the two stereotypes can cancel one another out for gay black men in the employment context, according to research by a Princeton University graduate student in sociology, challenging the commonly held idea that membership in multiple marginalized groups leads to more discrimination than being a member of a single such group.

Sociologist David Pedulla asked 231 white participants in a nationwide survey to suggest a starting salary for an applicant for a fictional job as an assistant manager at a large retail store.

Each participant was shown one of four résumés, which were identical except for two items. Half used a white-sounding name, Brad Miller, and half used a black-sounding name, Darnell Jackson. In addition, half noted the applicant's role as president of the "Gay Student Advisory Council" in college while the other half listed his role as president of the "Student Advisory Council." 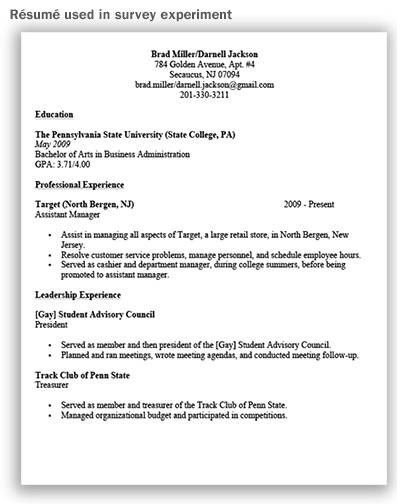 The survey participants recommended lower starting salaries for straight black men and gay white men than for straight white men, indicating a salary penalty for being black or for being gay, Pedulla said.

The research is described in a paper titled "The Positive Consequences of Negative Stereotypes: Race, Sexual Orientation and the Job Application Process" that was published in March in Social Psychology Quarterly.

"Several lines of work in the social sciences would suggest that membership in disadvantaged social categories combine in simple, straightforward ways," said Willer, whose research interests include status hierarchies. "But Pedulla's work suggests the process is more complex and that the contents of the stereotypes of different disadvantaged groups can counteract one another, leading to less total disadvantage than would have previously been expected."

"Survey experiments of this sort combine the descriptive strength with very high levels of control, allowing the researcher high confidence in making inferences of causality to larger populations," he said.

Tamar Kricheli-Katz, who is an assistant professor at the Buchman Faculty of Law and the Department of Sociology and Anthropology at Tel Aviv University in Israel, said it is important to note that being a member of two disadvantaged groups may not always be beneficial.

"The effect depends on the content of the contradicting stereotypes and on the context and its cultural meanings," said Kricheli-Katz, whose research interests include inequality, anti-discrimination law and employment law. "As a result, the same group of people (like black gay men) may be disadvantaged in some contexts while advantaged in others."

Along with exploring what other stereotypes might interact in unexpected ways, Pedulla said, "I would be interested in conducting an experimental audit study of real job openings in the labor market where the race and sexual orientation of the job applicants were experimentally manipulated."

The data collection for Pedulla's survey experiment was supported by Time-Sharing Experiments for the Social Sciences, which is funded by the National Science Foundation (NSF Grant 0818839, Jeremy Freese and James Druckman, Principal Investigators).