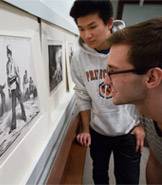 Joseph Wood (foreground) and Jesse Chou take a closer look at a lithograph as part of the Princeton University freshman seminar "Funny Pictures: Caricature and Modernity," in which students are learning about caricatures and comic illustrated books both from a historical-political perspective and critically, as works of art.

Why do we make funny pictures?

Long before comics and cartoons, artists filled newspapers with caricatures. These images distorted the human face and body for comic effect, often as a form of social and political criticism.

In their first semester on the Princeton University campus, seven freshmen are exploring the fine art of caricatures and comic illustrated books from Hogarth to Picasso in the freshman seminar "Funny Pictures: Caricature and Modernity," taught by Anne McCauley, the David Hunter McAlpin Professor of the History of Photography and Modern Art in the Department of Art and Archaeology.

Soraya Morales Nunez, who was born in Mexico and lives in Colorado, said the small size of the seminar is far different from her high school experience, where her classes often had as many as 40 students.

"Having a class with only six other kids has given me space to contribute a lot of my own ideas," Morales Nunez said. "In high school, I often found myself restrained from giving intellectual input in class discussions. At Princeton, and especially in this seminar, it has been very different — you are expected to talk, creating room for a more meaningful discussion among your peers." 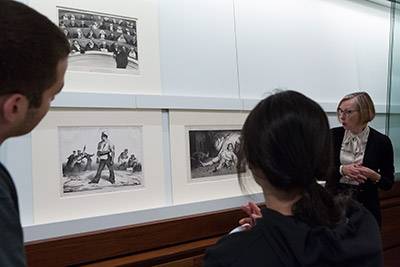 Anne McCauley (right), the David Hunter McAlpin Professor of the History of Photography and Modern Art, leads a discussion about the caricatures of Honoré Daumier in the prints and drawings room of the Princeton University Art Museum.

This is the first year McCauley, who joined the Princeton faculty in 2002, has taught the seminar. "Caricature has been a longstanding interest of mine," said McCauley, who organized an exhibition on French caricatures and comic illustrated books at the University of Texas-Austin, where she taught in the 1980s.

She said she chose caricatures as a topic for a freshman seminar because of the "amazing" holdings of French and English caricatures, among other works, in Firestone Library and the Princeton University Art Museum. McCauley believes in teaching from original objects and tailors her courses — which include undergraduate and graduate seminars on the history of photography, and museum history, theory and practice — to take advantage of the University's rich collections.

"I wanted to expose freshmen to the great resources Princeton has for students," McCauley said. "They are often really excited to be handling and viewing original works of art. For example, we looked at a Rembrandt etching and 18th-century drawings by [Giovanni Battista] Tiepolo and [Pier Leone] Ghezzi in our first class in the art museum." 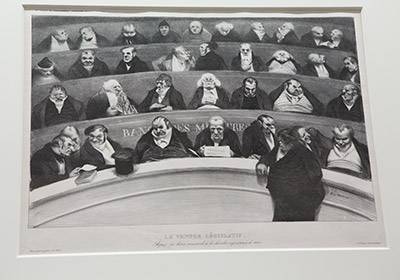 In the 1834 caricature "Le Ventre legislative (The Legislative Belly)," Daumier exaggerates the physical characteristics of members of the Chamber of Deputies, satirizing the fact that membership leaned toward the wealthy and the elderly.

In November, the class took a field trip to the Zimmerli Museum at Rutgers University to view French comic illustrated periodicals from the 1880s-90s.

The syllabus covers a range of topics, including social and political satire in Britain and France from 1789-1815, French caricature of the Restoration, and caricature during the American Civil War.

"Caricatures provide good insights into historical attitudes and often reveal beliefs that must be repressed in serious writing or art," McCauley said. "Therefore, I thought that the course might appeal to students interested in modern history and popular culture."

One way the students are directly engaging in popular culture is by submitting captions to The New Yorker's weekly cartoon caption contest. That's what hooked Sherry Romanzi of Providence, Rhode Island, when she perused the freshman seminar offerings.

"I fancy myself a wordsmith, but I knew I would never be gifted with the ability to draw," she said. "Oftentimes, when I think of a joke, I imagine how much better it would be if only I could illustrate it and turn it into a cartoon. So when I learned that we would be submitting captions, the class seemed tailor-made for me!" 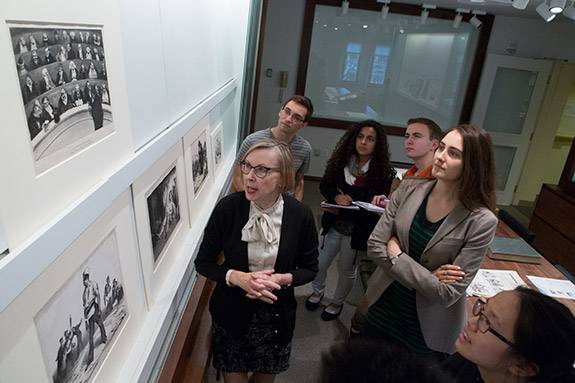 McCauley, who tailors her courses to take advantage of the rich collections in Firestone Library and the art museum, asks students to identify the techniques Daumier used to communicate political views and opinions.

On a recent fall afternoon, the group viewed several early-19th-century lithographs by French caricaturist Honoré Daumier in open glass cases in the prints and drawings room of the art museum, where curators pull specific items for classes.

The students gathered around the first print, "Le Ventre legislative (The Legislative Belly)," which depicts the Chamber of Deputies, or lower house of the French Parliament. McCauley said Daumier pokes fun at the newly elected members by drawing them with stretched faces and other exaggerated physical characteristics such as well-fed bellies and long white hair, satirizing the fact that membership leaned toward the wealthy and the elderly. One student pointed out a rotund figure dozing in the back row.

Turning from the historical-political to artistic technique, McCauley told the group that in this pre-photographic era, Daumier, who also studied sculpture, created little busts of each member of the legislature. The previous week, the class had visited Firestone Library to view original editions of La Caricature, the journal founded under the reign of King Louis-Philippe that made Daumier famous. The journal's artists would reference Daumier's busts to create their caricatures.

She added that because of his extraordinary draftsmanship, Daumier was often compared to Michelangelo.

"What has surprised me most is how art-intensive the course is," said Romanzi. "I expected to be dealing with the social influence and psychology behind humor, but we also delve into close analysis of pieces. It is a true art class." 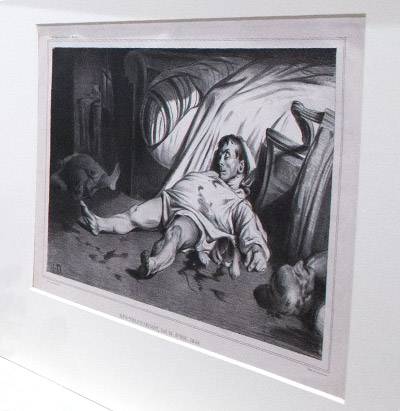 In the caricature, "Rue Transnonain," Daumier depicts the murder of a working-class family. "This caricature is absolutely not funny, so what are we seeing in this picture?" McCauley asks the students.

The group turned next to "Rue Transnonain," which depicts the cold-blooded murder of a working-class family, accused of protesting against a new law limiting the formation of labor unions, by government troops. A man, still in his nightclothes, is shown pulled from his bed, dead on the floor, with other family members — including a child crushed underneath him — sprawled about the bedchamber.

"This caricature is absolutely not funny, so what are we seeing in this picture?" asked McCauley.

The students pointed out several details. "That looks like newly spilt blood." "The sheets have been yanked." "This guy [on the floor] is a martyr."

McCauley agreed: "It's a caricature because it's a political protest, but it's not intended to be funny. It's intended to be horrific, incredibly realistic, like shock value."

McCauley said she hopes that the students will take away a broader understanding of visual art.

"What I like about teaching freshmen is that they are still quite open and eager to learn," she said. "I hope that they'll realize that there are all these amazing objects out there that are very different from what they can see on the Web and that those objects can tell them a lot about the past and about its continuities with — and differences from — the present. I hope they will learn to talk and write about visual images. And have some fun in the process."

She noted, "And it's possible to get science and engineering students interested in the humanities before they head off to their majors."

Joseph Wood of Holland, Ohio, plans to study engineering and is taking pre-med requirements. "I know that my chances to take classes outside of my major will be limited," he said. "I saw this class as an opportunity to learn about humor and political cartoons of the past."

"Anne McCauley is a very exuberant professor," Morales Nunez said. "It's easy to tell that she enjoys what she does in her field because there is never a dull moment in class, and that's pretty difficult to maintain in a three-hour-long seminar." 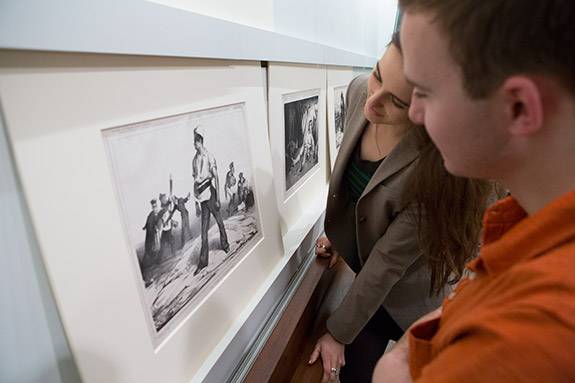 Sherry Romanzi and Elon Schmidt-Swartz examine Daumier's caricature "Ne vous y frottex pas! (Don't meddle with the press!)" in which the artist makes a plea for freedom of the press. Romanzi says she was drawn to the course for its mix of art history and popular culture; the students are submitting captions to The New Yorker's weekly cartoon caption contest.