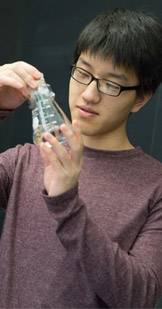 Daniel Liu and fellow Princeton students in the freshman seminar "Alchemy, Art and Science" are examining elements and compounds known to alchemists. The seminar, taught by historian Jennifer Rampling, takes alchemy as a starting point to explore issues central to the history of science and medicine.

Before Daniel Liu began the freshman seminar "Alchemy, Art and Science," he dismissed the subject as a "pseudoscience characterized by fraud and fruitless endeavors." But he was curious.

His views began to evolve as he explored the course, taught by Jennifer Rampling, an assistant professor of history in her first year at Princeton who is working on two books on alchemy and edits an academic journal on the topic.

"We have seen that alchemy was indeed as much a science as any other branch of knowledge in its time, and that the process of alchemical study was a significant contributor toward what we now call the scientific revolution," Liu said. 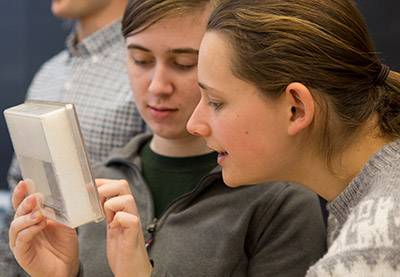 Sarah Reid, left, and Lydia Watt study a sample of a compound used by alchemists. During the class session held in Frick Chemistry Laboratory, students got a firsthand look at the possibilities and limitations of materials used by alchemists. (Photo by Denise Applewhite, Office of Communications)

Alchemy as a starting point

Designated the Class of 1975 Freshman Seminar and supported by the David A. Gardner '69 Magic Project in the Council of the Humanities, which supports creative ideas that break new ground intellectually and pedagogically, the course takes alchemy as a starting point to explore issues central to the history of science and medicine. Tracing alchemical ideas and practices from Greco-Roman Egypt and Islamic lands to Western Europe and the New World, the seminar examines how alchemy's practitioners contributed to new technologies and explanations of natural phenomena.

But what is alchemy? A simple definition is elusive — it's much more than trying to turn lead into gold. Rampling described alchemy as an umbrella term for a range of procedures and outcomes focused on perfecting matter. That might mean attempting to create precious stones, develop an elixir to extend life or improve the smelting of copper. Alchemy was studied and practiced by princes, physicians, clerics, natural philosophers and entrepreneurs.

"My own interest is to try to take alchemy on its own terms, so to look at what its practitioners thought it was and to work out what they were actually trying to do," Rampling said. "All of these people are going to define the art slightly differently. I'm interested in the differences between these positions." 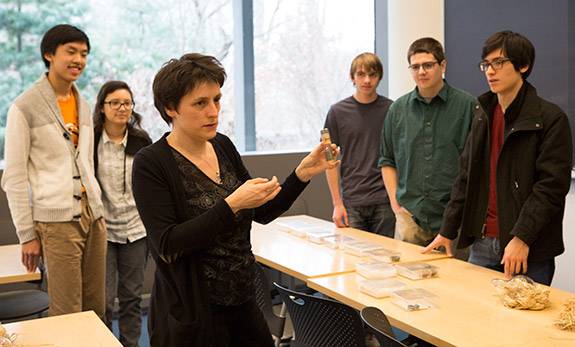 Jennifer Rampling, an assistant professor of history, highlights elements and compounds that were known to alchemists during a class session in Frick Chemistry Laboratory. One of the challenges in studying alchemy is deciphering recipes left by early practitioners. (Photo by Denise Applewhite, Office of Communications)

The students met for the first time in Firestone Library, where they examined a Ripley Scroll, a four-meter long illustrated manuscript from the late 16th century. There they learned to decode the Scroll's fantastical imagery, which describes stages in the alchemical process of preparing the philosophers' stone — for instance, a dragon devouring the sun and moon, which represents the dissolution of gold and silver in a powerful solvent. The scroll, one of about 23 in existence around the world, is an example of how far alchemists might go to disguise their processes and attract the attention of patrons.

"There is nothing in this sequence that can be repeated clearly because we don't even necessarily know what the two starting materials are," said freshman Faridah Laffan. "This is a classic example of the esotericism that runs rampant in almost all alchemical recipes and writing."

Yet even the most elaborate imagery often disguised real processes. For one of the course's final sessions, the students met at Frick Chemistry Laboratory to examine tools and materials like those that would have been available to alchemists. Guided by Rampling and Kathryn Wagner, a lecture demonstrator in chemistry, they discussed how to re-create a recipe for the "vegetable stone": a versatile elixir supposed to extend life and transmute metals. Using modern equipment, Wagner reconstructed the early stages of the recipe: distilling tartar with aqua vitae (alcohol) to produce a white, oily powder with a distinctive fragrance. This odor is described in medieval alchemical writings, suggesting that even if they never succeeding in making gold, alchemists were used to experimenting with materials.

"You get such an insight into your assumptions about science and about how a laboratory operates just by running some of these early experiments," Rampling said. "When things go wrong, it's at least as interesting as when you get exactly what you were expecting. Did you fail because your goal is impossible, or just because you missed something — and how can you tell? That may be good training for scientists."

In between, students studied early modern books, manuscripts, paintings and objects. The 14 students in the course — whose academic interests include computer science, history, psychology, molecular biology, physics and mathematics — examined alchemy in relation to topics such as religious belief, patronage, power and imagery. 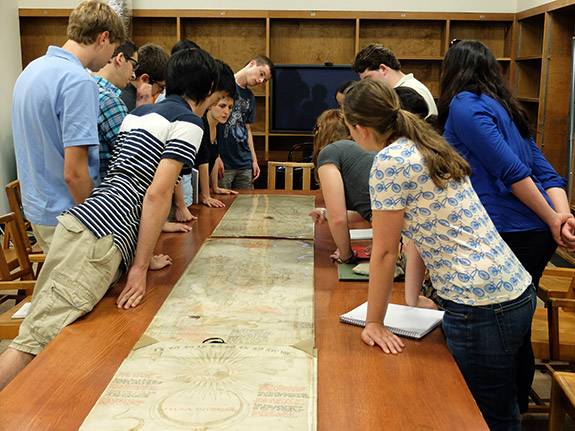 Students learn about an illustrated alchemical scroll during a class in Firestone Library. The Ripley Scroll, a four-meter-long illustrated manuscript from the late 16th century, is one of about 23 in existence around the world. (Photo courtesy of Jennifer Rampling, Department of History)

One of the goals of the course is for students to learn the skills needed to decode early experimental instructions, which were often rendered in terms intentionally cloaked at the time and unrecognizable today.

An earlier class session focused on alchemy and the body began with a challenge. What, Rampling asked, was the subject of this passage, written by the 15th-century alchemist George Ripley to King Edward IV?

I counsell you eate and drink temperately,
And beware well that Iposarche come not in place,
Neshe not your wombe by drinking immoderately,
Least you quench naturall heate in little space,
The colour will tell appearing in your face,
Drinke no more therefore than you may eate,
Walke up and downe after an easie pace,
Chase not your bodie too sore to sweate.

Not surprisingly, the students said the text appeared to contain medical advice. In fact, Rampling said, the coded passage is a metaphorical description of the philosophers' stone. For example, the phrase about drinking moderately is advice on how much liquid to add, Rampling said.

"Metaphors and analogies are a convenient way of conceptualizing difficult and strange doctrines, but they are also a useful way of explaining the doctrines to people who are less familiar with them, in this case the king of England," Rampling said. 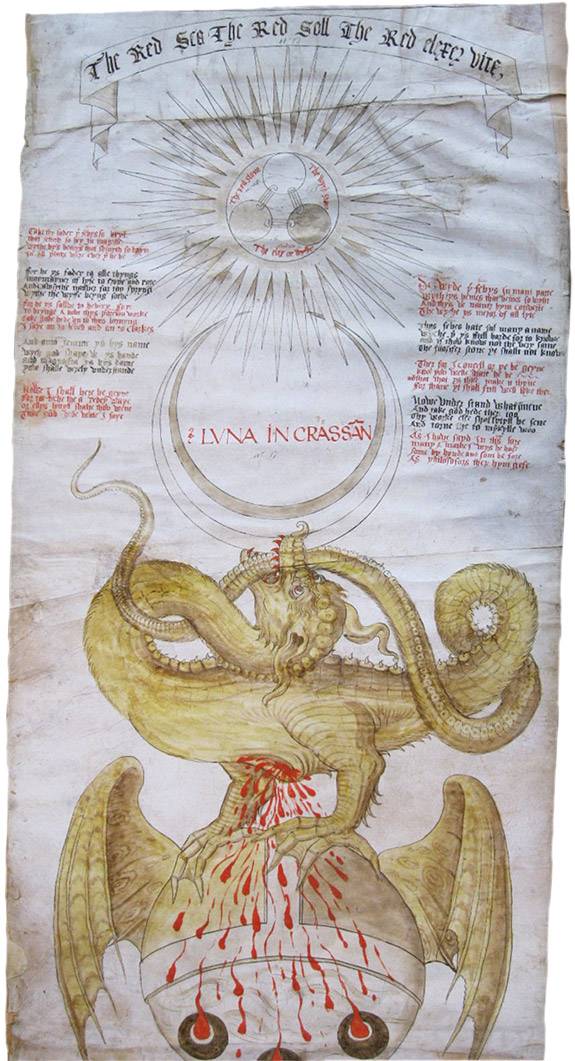 The Ripley Scroll's fantastical imagery describes stages in the alchemical process of preparing the philosophers' stone. In this detail image, the "Serpent of Arabia" devours a stylized sun and crescent moon, showing the dissolution of gold and silver in the philosophical mercury. (Photo courtesy of Jennifer Rampling/Princeton University)

Later in the same class, a mention of blood-letting as a medical practice prompted this question from a student: "It doesn't seem like blood-letting would ever really work, so what was the basis behind that practice?"

"This is a good question, and in a way this question is at the heart of what we're trying to do," Rampling said. "Why do people do things that we basically think are stupid? Our view that it is stupid, or at least wouldn't work, comes from our world view. Theirs is from theirs."

She continued, offering an example from today: "To the people of that time, the idea that if you are sick, you just go to the doctor and be given one pathetic little pill would be absurd. That would be a sign of quackery."

The exchange highlights one of the challenges of the class for students: understanding alchemy from the perspectives of those who practiced it.

"This class has forced me to eliminate any biases that I may have and examine the topic for what it is," said student John Finlay. "This is the first time that I have even considered the idea, but I believe it has significantly contributed not only to the way in which I approach the course content, but also how I now tend to view any historical or modern event."

Such a change in perspective is part of what Rampling said she hopes students take from the course.

"I hope that by historicizing science in this way the students will turn fresh eyes on what they're doing in the modern period and realize that modern scientists sometimes make mistakes, too, or continue to believe something even when there is contrary evidence because it's in a textbook, which I think happens much more than common thought might suggest," Rampling said. "I hope they'll be better historians and better scientists."

Faridah Laffan takes a close look at one of the samples of elements and compounds available to early alchemical practitioners. (Photo by Denise Applewhite, Office of Communications)