The 3-D printing scene, a growing favorite of do-it-yourselfers, has spread to the study of plasma physics. With a series of experiments, researchers at the Princeton Plasma Physics Laboratory (PPPL) have found that 3-D printers can be an important tool in laboratory environments.

"The printer is now a crucial piece of our laboratory and used regularly," said Andrew Zwicker, the head of Science Education at PPPL and lead author of a paper that reports the results in the current issue of the American Journal of Physics. "The versatility of the printer is such that our first reaction to an equipment need is no longer whether we can find or purchase the required piece of equipment, but can we print it?" 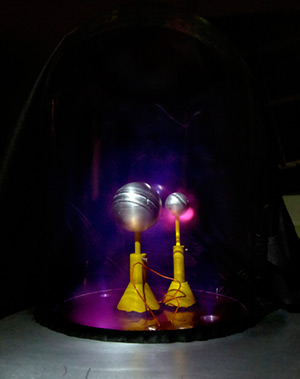 Three-dimensional printers create objects by laying down layers of material, whether plastic, metal, ceramic or organic. A computer controls a moveable nozzle that extrudes the hot material according to digital computer-aided design (CAD) files. Each layer is thin, often measuring only several hundred millionths of a meter in height.

Hobbyists have used 3-D printers to build curiosities such as sets of interlocking rings. But researchers have become interested because the printers can build customized parts for experiments, often at very low cost. And because a 3-D printer can produce parts quickly, the time between when a need is recognized and when a part is ready to install can be just a few hours.

During the experiments, Zwicker and his team printed plastic parts, including a cone and a cylinder, to test basic properties such as size, shape, use as an electrical insulator and ability to operate in a vacuum. The researchers also printed parts for an electrode in a plasma physics experiment, and replacement parts, such as a guard for a cooling fan and a handle for a piece of test equipment. Zwicker needed to see if the parts could withstand moderate vacuum environments in some plasma physics experiments and could withstand physical stresses. The team also needed to determine whether the dimensions of the parts matched the specifications of the designs.

The dimensions proved accurate, but only up to a point: On average, the individual layers were larger or smaller than the specifications by a fraction of a millimeter. While this degree of accuracy was not enough for objects that had to be built with a high level of precision, it was good enough for many laboratory purposes. 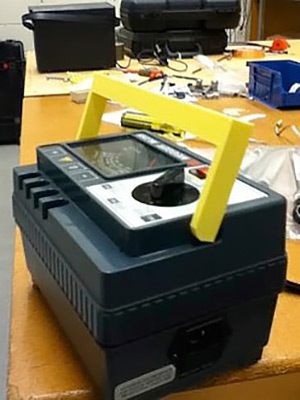 The plastic parts passed the vacuum tests and stress tests, too. Zwicker wanted to know if the parts began to emit hydrocarbon gas — as plastics sometimes do — that would contaminate the vacuum and ruin plasma experiments at moderate pressures. But as long as the plastic was kept below 75 degrees Celsius, no hydrocarbon gas was detected.

Next, the team placed small bars of 3-D printed plastic in a machine that tested the ability of a material to withstand pulling, and found that printing did not weaken it. In general, the strength of printed parts matched that of bulk plastic.

Finally, Zwicker found that a 3-D printer was an important tool for producing dielectric insulators for electrodes.

"The ability to print this material in any size, shape, or configuration provided an unmatched flexibility to quickly and efficiently test new configuration ideas for different experimental conditions," Zwicker said.

This work was supported by the Fusion Energy Sciences program in the U.S. Department of Energy's Office of Science.

PPPL, on Princeton University's Forrestal Campus in Plainsboro, N.J., is devoted to creating new knowledge about the physics of plasmas — ultra-hot, charged gases — and to developing practical solutions for the creation of fusion energy. Results of PPPL research have ranged from a portable nuclear materials detector for anti-terrorist use to universally employed computer codes for analyzing and predicting the outcome of fusion experiments. The laboratory is managed by the University for the U.S. Department of Energy's Office of Science, which is the largest supporter of basic research in the physical sciences in the United States, and is working to address some of the most pressing challenges of our time. For more information, please visit the Office of Science website.