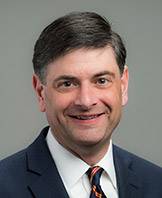 Kevin Heaney, who has worked in fundraising leadership positions for nearly 20 years, has been named deputy vice president for development at Princeton University. His appointment is effective March 9.

In this new position, Heaney will manage day-to-day operations of the development office and lead goal setting, organizational assessment, continuous improvement processes and talent management. He will supervise the assistant vice presidents, the executive director of information strategy, the recording secretary and the director of special projects.

"I am delighted we have identified and hired such a great colleague," said Elizabeth Boluch Wood, vice president for development. "Kevin has significant expertise in fundraising and campaigns and notable strengths in management and leading teams."

For the past nine and a half years, Heaney has been with the Oregon State University Foundation, serving most recently as vice president for constituent and central development programs and deputy campaign director. He played a key role in OSU's first comprehensive fundraising campaign, which surpassed its $1 billion goal 11 months ahead of schedule.

"It is an honor to become part of such an accomplished development organization, and my family and I are excited about becoming part of the Princeton community," Heaney said.

Before OSU, Heaney served in a variety of development positions at Georgetown University, Johns Hopkins University and Harvard University. During his career, he has been part of four highly successful campaigns and has chaired seven national conferences on campaign fundamentals and strategies for the Council for Advancement and Support of Education (CASE).