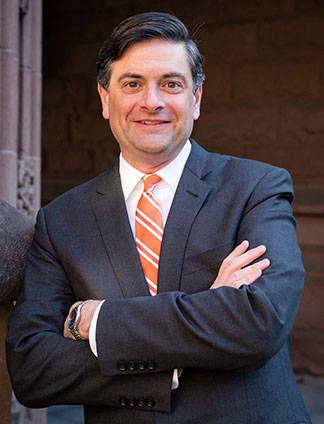 Kevin Heaney, acting vice president for development who joined Princeton in 2015 after more than 20 years in fundraising leadership at other universities, has been named the University's first vice president for advancement, effective immediately.

"I am delighted that Kevin Heaney has agreed to serve as Princeton University's first vice president for advancement," said President Christopher L. Eisgruber, to whom Heaney will report. "During his time at Princeton, Kevin has shown an ability to combine a deep appreciation for this University's distinctive alumni culture with insights drawn from his experiences on other campuses. His professionalism, strategic insight, managerial skills and energetic commitment to Princeton, to its alumni, and to achieving the University's mission distinguished him from other strong candidates in an international search. I look forward to his leadership as we develop a distinctive advancement model at Princeton, and to working closely with him in the years ahead."

Heaney will play an integral role in designing the next University campaign to advance priorities put forth in the strategic planning framework that the University's trustees adopted earlier this year. Princeton's last campaign — Aspire — was completed in 2012 and raised more than $1.75 billion.

Heaney will serve as a member of the president's cabinet, and he will play a strategic role in working with Eisgruber to maintain positive and productive relationships with key University donors and stakeholders, as well as the entire alumni body.

"I am very grateful to President Eisgruber for this opportunity and I look forward to working with my colleagues and Princeton's remarkable alumni to help advance the mission of this great University," Heaney said.

While at Princeton, Heaney has worked to enhance best-practices fundraising efforts, including launching innovative approaches to stewardship and donor engagement and emphasizing staff collaboration and motivation. This fiscal year, the development office's front-line and operations staff, in partnership with campus colleagues and alumni volunteers, exceeded the fundraising target of $262 million.

Previously, Heaney worked with the Oregon State University Foundation for nearly 10 years, including as vice president for constituent and central development programs and as deputy campaign director. He also has held development positions at Georgetown University, Johns Hopkins University and Harvard University.

During his career, Heaney has been an active member of the broader development community, and has chaired seven national conferences on campaign fundamentals and strategies for the Council for Advancement and Support of Education.

Heaney earned a law degree from Boston College and has a master's in higher education from Teachers College, Columbia University. He has a bachelor's degree in English literature from the University of Cincinnati.

Matteo named vice president for finance and treasurer at Princeton