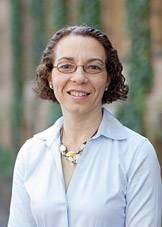 Michele Minter, who has more than 15 years of leadership in higher education administration and institutional advancement, with a significant amount of that time at Princeton, is returning to the University in her new role as vice provost for institutional equity and diversity. Her appointment is effective Sept. 12.

Reporting to Provost Christopher Eisgruber, Minter will manage the University's equal opportunity and affirmative action efforts, as well as oversee budgets and personnel associated with affirmative action compliance and equity, diversity initiatives, and disability services. She will oversee the University's compliance with Title IX, the federal equal opportunity act, and will coordinate compliance with the Americans with Disabilities Act. She'll also serve as co-chair of the University's Disability Council and the Diversity Council, as well as oversee the Office of Disability Services.

"Michele Minter is a star, and I am thrilled that she is returning to Princeton in this new role. She brings to the position extensive experience in higher education, brilliant management skills, and a demonstrated commitment and creative approach to the goals of equity and diversity. I am confident that Michele will provide Princeton with the distinguished and innovative leadership that the University needs to make continuing progress in this critical area," Eisgruber said.

Minter has served since 2008 as vice president for development at the College Board, where she led initiatives in education reform, research, programs and services, and expanded fundraising with federal and nongovernmental organizations.

At Princeton, Minter previously held key leadership roles in the University's fundraising efforts in the Office of Development. From 2004 to 2008, she was director of development and campaign director for Princeton's current $1.75 billion capital campaign, which is scheduled to end in June 2012. She joined the Princeton staff in 1995 as associate director of leadership gifts and was promoted to senior associate director in 2000 and director in 2003.

"I know from experience that Princeton has a deep commitment to excellence and to fostering an inclusive, vibrant community," Minter said. "I look forward to working with the entire community of students, faculty, staff and alumni to build on past efforts and identify new ways for Princeton to realize its full potential on issues of equity and diversity."

Before coming to Princeton, Minter was director of concerts and special events at Westminster Choir College, an on-site evaluator for the National Endowment for the Arts and an agent and publicity representative at Columbia Artists Management.

A Yale graduate, Minter earned an MFA in theater from Brooklyn College of the City University of New York. She is an associate faculty member of the Women's Philanthropy Institute at Indiana University and a steering committee member of the Black Women Donors' Action Group of the Women's Funding Network. She also is co-chair of the Fund for Women and Girls in the Princeton Area Community Foundation and serves on the Princeton committee of the NAACP Legal Defense Fund.