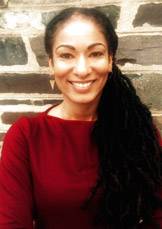 Ruha Benjamin, an assistant professor in the Center for African American Studies at Princeton University, is bringing her scholarly focus on "discriminatory design" — the idea that we can create technological fixes for social crises — into the classroom and to a wider audience with a TEDx Baltimore talk.

Ruha Benjamin, who joined Princeton in 2014 as an assistant professor in the Center for African American Studies, started out as a drama major at Spelman College before switching to sociology. "I soon realized I was just as interested in what happens behind the scenes as what happens on stage," she said. "This demystification process is what drew me to sociology, because I want to know how things are put together, in this case, society."

Benjamin is a faculty associate in the Program in History of Science, the Center for Health and Wellbeing, the Program in Gender and Sexuality Studies, and the Program in Global Health and Health Policy. She is the author of "People's Science: Bodies and Rights on the Stem Cell Frontier." Benjamin specializes in the interdisciplinary study of science, medicine and biotechnology; race-ethnicity and gender; health and biopolitics; and the sociology of knowledge.

"Sociology gives me the tools to question the very things we are told are inevitable and natural. In particular I want to know how ideas about inherent human differences, which are often mapped onto racial and gender categories, play a role in medical research and scientific initiatives," said Benjamin, who received her B.A. in sociology and anthropology from Spelman College and earned her master's and Ph.D. in sociology from the University of California-Berkeley.

On Jan. 30, Benjamin brought this inquiry to a wider audience with a TEDx talk in Baltimore. TEDx talks are a spin-off of the TED series — short, powerful talks on a wide range of topics and issues, given before a live audience and shared via video on the Internet. Blending a sociologist's observational skills and an actor's sense of storytelling, Benjamin's 21-minute talk "From Park Bench to Lab Bench: What Kind of Future Are We Designing?" gives viewers a backstage tour of what she calls "discriminatory design."

Using as a jumping off point the design of some public benches to stop loiterers from lying down on them (such as those with armrests every two feet), Benjamin carries the metaphor into the lab. She tells three stories that illustrate the "very subtle ways that discriminatory design — the idea that we can create technological fixes for social crises — is built into the everyday architecture of workaday medicine and science." The stories center on:

• Medical ethics in the case of an African American egg donor; watch this segment.

• Neuroscience research on impulsivity that uses prisoners as subjects; watch this segment.

• Genetic research in the aftermath of school shootings that examines "the DNA of mass killers, instead of looking at the social and political climate — such as the proliferation and accessibility of firearms"; watch this segment.

Benjamin is also discussing discriminatory design in the two undergraduate courses she is teaching at Princeton this semester: "Race Is Socially Constructed: Now What?" and "Black to the Future: Science, Fiction and Society."

Ruha Benjamin's Jan. 30 TEDx Baltimore talk "From the Park Bench to the Lab Bench: What Kind of Future Are We Designing?" gives viewers a backstage tour of what she calls "discriminatory design."