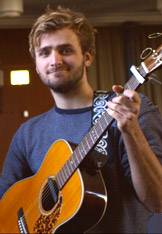 Princeton students Charles Baker and Lachlan Kermode make up the folk duo Baker & Goods, which allows them to cultivate their love of music while pursuing their studies. In this video, the duo and sophomore Sydney King perform the song "Oh," which was written by Kermode, above.

Between classes, Princeton students pursue many interests — such as music — that may not be related to their studies.

Brought together by student theater and influenced by the sounds of Simon & Garfunkel, Baker & Goods is a folk duo consisting of sophomores Charles Baker and Lachlan Kermode. In the video below shot in a McCosh Hall classroom, they perform their song, "Oh," featuring vocals by sophomore Sydney King.

Baker, a German major from New York City, and Kermode, a computer science major from Auckland, New Zealand, befriended each other in spring 2014 while working on the production of the musical "Sweeney Todd" by the student group Grind Arts Company, which focuses on pushing artistic boundaries. They began harmonizing during rehearsals to pass the time.

That summer, Baker invited Kermode to join him and his family on a vacation to Montauk, a small beach town in New York. There, the friends surfed all day and played their guitars in the evening, singing both original and cover songs. They sometimes played publicly on the beach for those who walked by, and after receiving positive reactions, they decided to form a duo.

Baker and Kermode, who also count Bob Dylan and Joni Mitchell among their musical influences, divide songwriting duties, and usually the person who writes a song sings the melody while the other musician harmonizes and plays lead guitar. Occasionally they bring in a third vocal part, as seen in video for "Oh"; they have included King on vocals for a few of their songs for added harmony. They met King, an art and archaeology major from San Francisco, during the creation of their first music video, for their song "Saturday Night," which she filmed.

"There's a small but thriving musical scene on campus," Baker said. "Everyone's really supportive of each other. … There's a lot of cross-pollination of people being in multiple groups, so it's really tight knit, which is cool."

Princeton's student bands perform on and off-campus, from local coffee shops to the Princeton University Art Museum. The eating clubs along Prospect Avenue are also a popular place to hear new music, and Baker & Goods is the "Artist-in-Residence" at Murray-Dodge Café.

'Between Classes With Baker & Goods'